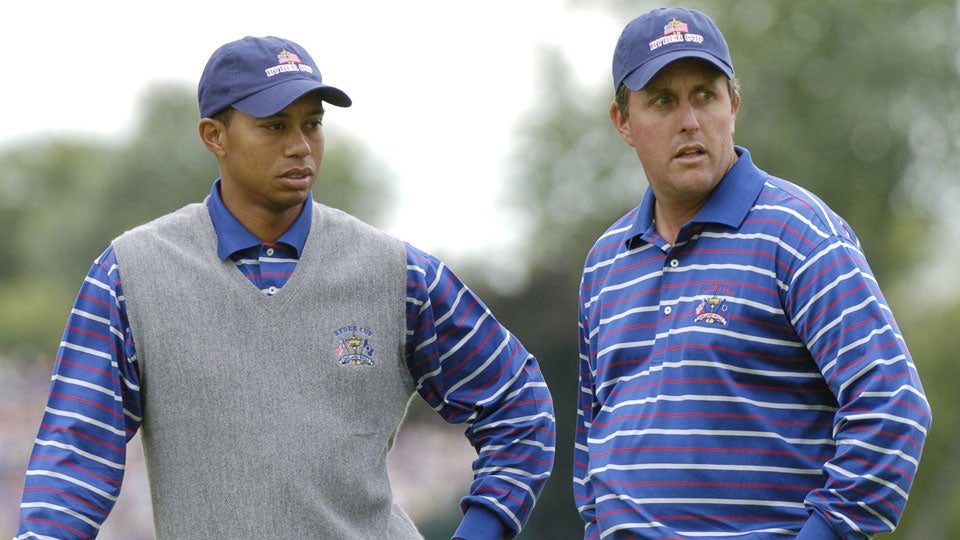 Tiger Woods and Phil Mickelson wait during their four-ball competition at the 2004 Ryder Cup in Detroit, Michigan, on Sept. 17, 2004.
Al Messerschmidt/Getty Images/WireImage

They were supposed to be the Dream Team. They turned out to be anything but.

U.S. captain Hal Sutton sent the golf world into a tizzy when he paired his two studs, Tiger Woods and Phil Mickelson, together at the 2004 Ryder Cup at Oakland Hills. Sutton expected explosive results. Instead his plan backfired.

The duo lost twice, including the opening match of the event, and many believed the obvious friction between Tiger and Phil hurt the U.S. squad’s chemistry en route to a humiliating 18.5–9.5 loss to the Europeans. It was the most lopsided defeat ever for an American team. Woods and Mickelson lost 2&1 in a fourball match to Colin Montgomerie and Padraig Harrington before blowing a 3-up lead to Darren Clarke and Lee Westwood in an afternoon alternate-shot match. All square on the 18th tee, Mickelson, who had decided this was the week to debut brand new Callaway clubs, hit a wicked slice. His ball landed by a fence, forcing Woods to take a penalty drop.

“Woods craned for a view of his fate,” Alan Shipnuck wrote in Sports Illustrated. “He had the pinched look of a babysitter who has finally run out of patience.”

Woods and Mickelson have not been paired together since.