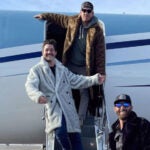 Hello everyone, and welcome to another edition of the Rogers Report. Cameron Smith and his mullet won the Sentry Tournament of Champions on Sunday, but that wasn’t the only thing that made waves in Hawaii. It’s been a few weeks and a lot has happened, so let’s get right to it.

As an avid Tiger fan and active member of Golf Twitter, whenever an old video of the 15-time major champion resurfaces, there’s like, a 95% chance I’ve already seen it. Holes-in-one, highlight videos, funny interactions — you name it. But this hilarious video of Tiger messing with Butch Harmon on the range is a gem that not even I had seen before. I love watching Tiger show some humor and personality, even in (maybe especially in) a video that’s 22 years old. Check it out:

We say it’s Hawaii season on the PGA Tour. Dustin Johnson calls this Aspen season. He and his crew (Paulina, AJ, AJ’s wife Sam Maddox and some pals) have been skiing in Aspen for the last week or so, and they have been kind enough to share some of the trip’s highlights on Instagram. There’s nothing quite like living vicariously through a 24-time PGA Tour winner in 15-second increments online. Side note: I never watched Keeping Up with the Kardashians, but I think this group would be wildly entertaining in a similar reality-TV series. Instant People’s Choice Awards winner.

3. Joel Dahmen gets mistaken for a layman

There’s a game I sometimes like to play called “Which PGA Tour winners do you think can go out in public and not get recognized?” It’s a good conversation starter (with the right people), but this incident including Joel Dahmen and shared by his caddie, Geno Bonnalie, really brings things to another level.

Listen, no disrespect to Joel, but I don’t really expect him to be recognized at the mall or even a restaurant during an off-week. With that said, this shuttle driver was bringing Joel Dahmen TO the course and didn’t realize he was a pro? I can’t help but laugh. It also reminded me of this old Tweet from Max Homa about not being recognized by a driver.

Let’s face it. We’ve all been invited to a party that we didn’t really want to attend. Online RSVPs make things easier because you can just click a button to decline (or hit accept and then come up with a last-minute excuse). But Kevin Na shared an invite so special that he had no choice but to accept.

Literally. There is no decline option. I mean, the Masters obviously knows its audience. But I can’t help but wonder how, perhaps, an injured player might respond to this. Then again, it’s Augusta National. They know what they’re doing.

5. A rare WAG sighting in Kapalua

Jena Sims’ Instagram gives us a glimpse of what it’s like traveling week-in and week-out on the PGA Tour. There are some WAGs who are more private when it comes to social media, but they all joined forces this week when they had what Jena called a “Lei’des Day” (Ha!) in Kapalua. In attendance was Annie Spieth, Nikki Guidish, Jillian Wisniewski, Jena herself and Helen English. Looks like a fun outing!

And last but not least, we have what appears to be another annual bet between Brooks Koepka and Justin Thomas. For the uninitiated, BK and JT have a yearly competition of Who Holes Out the Most. We don’t know how much is at stake, but we do know that it’s a money game. And every time BK holes out he’s quick to catch the attention of any cameraman.