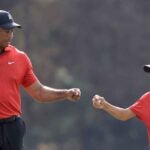 The Woods family return at the PNC Championship brought out viewers in droves.

Welcome to another edition of the Hot Mic, GOLF’s weekly media column dedicated to the people (and stories) behind the action you watch each week.

There are many ways to quantify “the Tiger Effect” but perhaps the simplest is in the cold, hard numbers.

Like television numbers. Back in the late 90s, the first mentions of the “Tiger Effect” came largely thanks to the corresponding spike in viewership that joined his biggest moments. At the 1997 Masters — Woods’ international coronation — CBS viewership nearly doubled from the previous year, growing to just shy of 20 million viewers. The next year, with Tiger far from contention for most of Sunday, viewership dipped back to 15 million. Three years later, the Tiger Slam sent final round viewership shooting back up to 19 million.

In those early days, the Tiger Effect had a literal meaning as well as a figurative one. Literal, in the sense of the many million viewers who flocked to witness his attempts at greatness. Figurative, in the billions of dollars of revenue generated for the sport of golf off the back of those victories.

In 2021, the Tiger Effect holds a slightly different weight. Viewership is down acoss the board. Fewer folks tune into events on broadcast television than they did 20 years ago, even when the stars align. Fewer still tune in for a hit-and-giggle, parent-child event on the Sunday before Christmas. Add in competition with the NFL, NBA and NHL and, well, you’ve got a recipe for a ratings disaster. (A larger portion of viewers have gone to streaming, and while some networks have begun attempting to track those audiences, those estimates are often seen as unreliable.)

So, with all that context in mind, how can the Tiger Effect be quantified in 2021? According to television viewers (in addition to our good friends at NBC and Sports Media Watch), the answer is clear: in Woods’ grand return to golf resulting in the best ratings for the PNC Championship in two decades. On Sunday, NBC’s telecast of final round coverage of the event drew in 2.24 million viewers and a 1.3 rating — the second-highest rated and most-watched telecast for the PNC since it moved into this schedule slot in 2012. That number was behind only Saturday’s coverage, which (ostensibly with less competition from other sports leagues) drew in a 2.34 million viewers and a 1.4 rating. The numbers represented the highest viewership for a PNC telecast since 2001, according to NBC.

The final viewership tally marked a near 50 percent audience increase over last year’s version of the event, and nearly quadrupled the audience numbers put forth by the PNC Championship in 2019, before Tiger and Charlie competed in the event together.

Now, that number still pales in comparison to network viewership for a big-time event. In fact, the closest comparison to the PNC from an eyeball perspective might be the Farmers Insurance Open or the Waste Management Phoenix Open — two respected (but hardly bellwether) PGA Tour events. In 2021, those tournaments averaged in the neighborhood of 2.5-3.5 million viewers, slightly outpacing the PNC.

But the PNC was never going to threaten major championship viewership numbers, nor was it expected to. The event is at an inherent disadvantage — during a busy stretch in the sports calendar, at a time when fans aren’t conditioned to watch golf — that even Tiger and Charlie Woods can’t usurp.

Rather, the numbers speak to the individual growth of the event over the last several years and to the value presented to a PGA Tour event when Tiger Woods walks through the front door. They speak to the value of marketable stars, and to the importance of social media. The deeper numbers — which show audiences watched for longer and engaged deeper than in previous years — speak to the importance of the event’s entertainment value. It’s a hell of a lot easier to keep viewers in the door when you’re showing them something easy to understand, fast-paced and unique to the golf schedule.

Or maybe the numbers speak to a lot of nothing. Maybe the whole event was an outlier — a gift from the ratings gods signed, sealed and delivered by its star duo.

One interpretation, however, is not up for debate. The Tiger Effect has maintained its stranglehold on golf audiences, even a quarter-century later.