This Erin Hills U.S. Open is now exactly what it’s supposed to be: a grind to a championship

ERIN, Wis. – It was an incredibly uninteresting day of golf. TGIF! Fridays at U.S. Opens are supposed to be boring. We’re playing for the national championship here, people. Such a serious pursuit requires the gents to avoid making bogeys. Which is kind of boring and also very great.

Thursday fooled you, right? The one-day breakout of the old Bob Hope tournament? That, people, was a freaky pop-up storm, the kind for which the Midwest is notorious. On Friday, the U.S. Open returned.

The 36-hole leader of the tournament—auto-correction: the championship—is Brendan Steele, 34-year-old American golfer with two unmemorable Tour wins. He is at four under par. Careful observers of the golf scene will note that, in actual fact, there are 12 players who have taken fewer strokes through the first two rounds. OK, be that way. What Brendan Steele has is the profile, the Webb Simpson, Scott Simpson, Steve Jones, Lou Graham profile: very good at golf, not flamboyant, the kind of golfer who understands that this week at Erin Hills is one long march to six under par. March, march, march, march, march. Thirty-six more holes.

An educated guess here is that you are rooting for Rickie Fowler. He followed his 65 on Thursday with a 73 on Friday. He’s six under par on this hilly par-72 course and he looks great on it, with his stylish swing and glide-down-the-fairway walk. You want to say he got his bad round out of the way. Maybe he did. But players like Rickie, fast and flashy, seldom win the U.S. Open, although Johnny Miller was fast and flashy. He won in ’73.

What Fowler does have going for him is that he’s lost a bunch of majors. Actually, a much fairer way to express that thought is he’s been in the hunt a bunch of times without getting it done, and that’s typically good training. You know, you lose a major before you win one. In 2014, he top-fived in all four majors. So he’s got that going for him. Still, the fast and flashy thing. 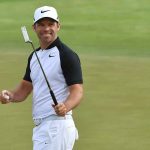 You may also like Paul Casey’s career has had its road bumps, but he’s finally ready to break through

Yes, for three or four days—or was it three or four weeks?—all people talked about what the golf course, the public course in this tiny farm town and the nutty maverick who went broke building it and how the USGA needs to get things back on track here, after Debacle I (Chambers Bay) and Debacle II (Oakmont rules fiasco). Finally the golf began, but it wasn’t U.S. Open golf. Not on Thursday it wasn’t. But on Friday it was. Yes, there were good scores again. Hideki Matsuyama of Japan went out in 30, shot 65 and is five under for two rounds. But the point here is that seven under was leading after the first day (one guy) and seven under was leading after the second day (four guys) and seven under is going to be a great score for 72 holes.

The day was warm and sunny, with a breeze that counted for something but not all that much. The players talked about the pins—auto-correction: the hole positions—being more difficult on Friday than they were on Thursday. Maybe. A little. The scoring averages for the two days were almost the same for both days. What would explain it was the wakeup call. They’re playing in the U.S. Open.

Rory McIlroy, Jason Day and Dustin Johnson are no longer playing in this 117th U.S. Open, to name three of the major winners who missed the cut. Johnson (one can reasonably guess) will spend the weekend with his newborn son, River Jones Johnson. As for McIlroy and Day, both are young muscular men who have been sidelined with various injuries and have not had any rhythm in their golfing year. It was surprising to see those three all miss the cut because they are all great drivers and Erin Hills, with far wider fairways than probably any course that has ever held a U.S. Open, encourages even the longest hitters to use the driver 10 or 12 times a round. J.B. Holmes and Jamie Lovemark and Paul Casey all got themselves lots of TV time by driving it long and in play. The USGA knows that the U.S. Open is, among other things, a TV show, and long drives play well on TV. But drives in foot-long fescue rough is a shortcut to 77.

Among the 18 players who are at four under or better, there is not a single player who has won a major and there is only one player, Fowler, who is known not just to the ardent golfer but to the broader sports fan. This may not sound like the most compelling sort of weekend for watching golf. But it will be, for the same reason it always is. It’s the U.S. Open. The course is hard and getting harder. Somebody’s life is going to change. We’re going to watch somebody be in control of his golf ball, his emotions and his mind-to-body messages. It will probably be Brendan Steele but maybe it will be somebody else. It won’t be Dustin Johnson.

“You have to smash driver and hope you’re not in the junk and go from there,” Steele said, explaining in no uncertain terms what we’ll all be looking for this weekend. That’s as good a summation as any, for what it will take to be successful here.