Things Could Get Ugly on Day 2 at the Presidents Cup 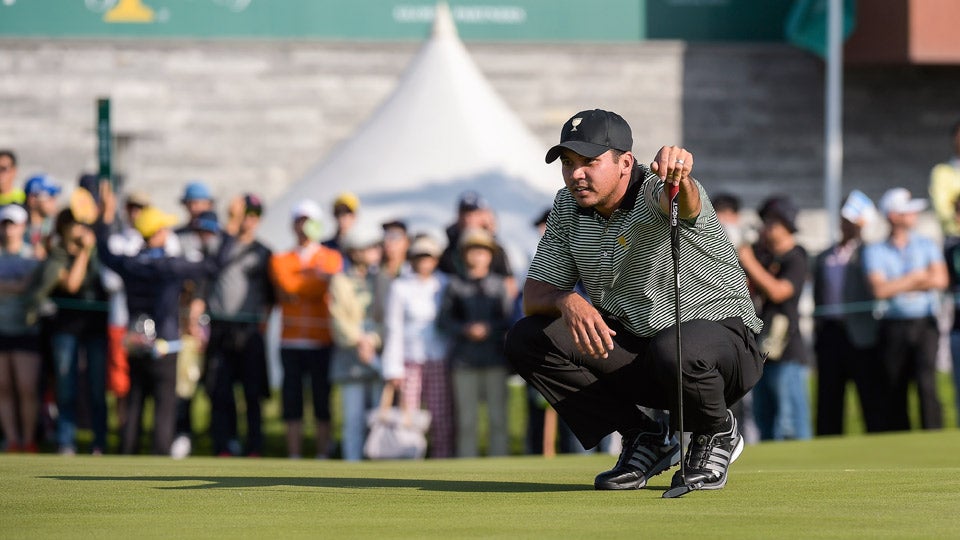 Jason Day during the first day of the Presidents Cup.
Getty Images

Nick Price and the boys face an uphill climb as they look to the second-day four ball matches at the Presidents Cup on Friday in Incheon City, Korea. (Starting at 8:35 p.m. ET Thursday, with the time difference).

After being granted a rules change in which the number of available points was cut from 34 to 30 — the better to hide a respective lack of depth on the International side — Price watched nearly everything go wrong as the Stars & Stripes went up 4-1 in the opening foursomes. Now, because of the rules change he lobbied for, his team has less time to mount a comeback.

“Obviously today was a really tough day for us,” Price said. “I think some of the guys on the team were a little nervous, which is to be expected. But we take our hats off to the U.S. team. They played really well today.”

And don’t look now, but the slate of day two matches also seems to line up well for the Americans, starting with Dustin Johnson and world No. 1 Jordan Spieth taking on Branden Grace and Louis Oosthuizen, the only International team that put a point on the board Thursday.

The Americans, who regularly struggle in the Ryder Cup, are trying to win the Presidents Cup for the ninth time in 11 tries. The lopsided nature of the competition had some wondering about the event’s longevity, what with some International stars reportedly on the fence about continuing to play this year. Thursday’s opening-session results certainly won’t help matters.

The other four ball games on the schedule for Friday’s play include:

Rickie Fowler and Jimmy Walker, who made six birdies during an easy, 5-and-4 win over Thongchai Jaidee and Anirban Lahiri on day one, will take on Korea’s Sangmoon Bae and New Zealand’s Danny Lee.

Zach Johnson and Phil Mickelson, who made news with their goofy celebratory handshake while dispatching Steven Bowditch and Jason Day 2 up in the opening round, turn their attention to Day and Adam Scott.

Power-hitting tandem J.B. Holmes and Bubba Watson, who thumped the poor putting team of Scott and Hideki Matsuyama 3 and 2 Thursday, will try to replicate their success as they face Bowditch and Marc Leishman.

Finally, captain’s pick Bill Haas and Chris Kirk, who both sat out the opening session, will take on Jaidee and Charl Schwartzel.

Four of the five International teams that will suit up for the second session will be new — only Grace and Oosthuizen, who made up the Internationals’ lone winning team Thursday, return intact. Meanwhile, four of the five American teams from Thursday will be brought back out for Friday’s second-round matches.

“I think the team room has got a good feeling,” U.S. captain Jay Haas said. “Obviously it was a great start for us, but I think they all realize it’s a long series right now. Kind of like shooting a low round in the first round of a tournament; there’s a lot of golf to be played.”