There’s no place like Torrey: In his return to the PGA Tour, Tiger Woods will lean on decades of local knowledge

What will Tiger Woods think about while walking the emerald-ribbon fairways at Torrey Pines this week? What will he do?

He knows how intertwined those two questions are, though he seldom hints at the strange alchemy that is at the root of all golf. We know better.

That’s because we’ve learned a thing or two over the past 20 or 30 years. We won’t get fooled again.

Yes, Tiger is the most examined yet unknown major figure to ever play the game. It goes without saying that he’s unlikely to ever tell us about his rounds with Barack Obama earlier this month and Donald Trump in late November. (Consider the list of people who have played with those two in the past year. There’s Tiger and — could there possibly be anybody else?) Woods, his improvised military training showing up in all he does, shares on a need-to-know basis. But by Friday afternoon we’re going to know exactly what Woods knows: whether he’s made the cut in the 2018 Farmers Insurance Open. At some point this week, he might revert to one his old standbys, about playing to win. The W. We recall another of his chestnuts: baby steps.

What a history he has at Torrey. It was at Torrey, a citadel of California public golf, that Tiger had a long series of grand coming out parties. That is, his six age-bracket wins in the International Junior World Championships. His first came at 8 years old, showing no respect to his elders in the 10-and-under division. That was in 1984, almost 34 years ago.

It was at Torrey that he won his last (to date), and the most unlikely, of his 14 major titles. That came at the 2008 U.S. Open, when he played 91 holes with a double stress fracture in his lower left leg. Five years later, in 2013, he won the Tour’s old-timey San Diego stop, at Torrey, for the seventh time.

In more recent we-are-Farmers, he…

…walked off on the 12th hole of the first round (deactivated glutes) in 2015,

…and last year? Competing in his first full-field PGA Tour event in 17 months and paired with Jason Day and Dustin Johnson, he missed the cut. All part of the history. All part of the memory bank. As Brandt Snedeker says, Woods has done more at Torrey than Sneds has done in his career.

So now Woods returns to La Jolla, playing in his first full-field Tour event since posting 148 last year at this time and place. You can’t break par on either course playing out of the long, damp right rough. Tiger knows that. He knows everything about the place, no matter how revamped the courses might be. The South course was redone by Rees Jones and the North by Tom Weiskopf. Tiger, one of the brainiest golf nerds you could ever want to listen to, can give you hole-by-hole accounts of the changes to the William F. Bell courses.

Tiger and Torrey! The place is a living museum of his life and times. In the permanent exhibit: here is Fluff, and there is Stevie; here is little Tiger’s tiny persimmon driver and there is Tiger’s enormous titanium one; here is Tida and there is Earl; here is Joanna (Jagoda) and there is Elin (Nordegren); here is Hughes Norton of IMG, there is Mark Steinberg of Excel Sports Management; here is TW playing in oversized prescription sunglasses on a warm summer day wearing a shirt bearing the crest of the Southern California PGA section and there he is this week, with his sweat-wicking Nike duds, his high-tech TaylorMade sticks, carried by pal Joey, back in action himself. This film, by the way, is updated yearly and made possible by donations from generous supporters like you.

Elsewhere on the premises, in this Golden Age of heavy metal golf, will be some grand representatives of different eras: Mr. Phil Mickelson (47), Mr. Dustin Johnson (33), Mr. Jon Rahm (23). Phil’s wife (Amy) and parents (Phil Sr. and Mary) and caddie-brother (Tim) and agent (Steve Loy) will of course be more invested in what Phil does this week than in what Tiger does.

But one says of Tiger, and only Tiger, that his return to prominence is good for every aspect of the game. Whether that is true or not is a matter of some science and more speculation, but you hear people say it everywhere you go in the game. Does that contribute to any pressure he might feel? It’s a question without an answer. We’re used to that. 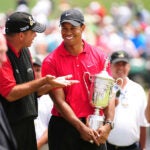 You may also like How I got that story: Inside Alan Shipnuck’s SI cover story from the 2008 U.S. Open

Tiger travels lightly. A golf bag with not even 20 clubs in it. A suitcase. A backpack. Out of the jet and into a car. Unmistakably light, in that sense. But in another, he carries more than we could really know. But the broad strokes are there for all to see, all that Torrey Pines success, decades of it. The more recent setbacks, too.

The weight of it all. The weight, the weight. When he was eight, he was a kid among other kids, so light on his feet the wind off the Pacific could almost lift him. Golf was a gift inside him aching to get out. On Father’s Day in 2008, and the day after it, Tiger was decidedly earthbound and he played with guile and will, guided by memory. He has won 13 times since that playoff win over Rocco Mediate, including his four-stroke win at Torrey in 2013. If you take out Phil, this Tiger Woods knows more about the ins and outs of playing Torrey Pines than the rest of the field together. He’ll try to use that, of course, as he tries to beat the two guys he’s playing with. You always want to beat the two guys you’re playing with. If Tiger does that on Thursday and Friday, there’s a good chance he’ll make the cut. An excellent chance. And that would be a fine start to whatever number comeback this is.