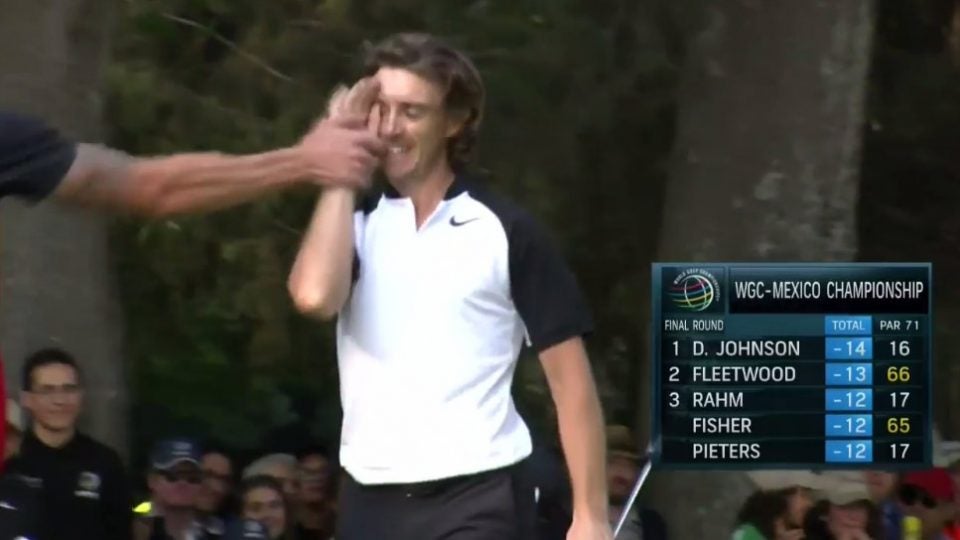 Tommy Fleetwood suffered a high-five/right hook from his caddie last week at the WGC-Mexico.
@PGATour

To play golf at a high level requires a heavy dose of hand-eye coordination. For whatever reason, professional golfers often don’t transfer those skills to high-fives.

At last week’s WGC-Mexico, Tommy Fleetwood drained a 40-footer on the 72nd hole to move into second place. In celebrating with his caddie, somehow Fleetwood managed to hit himself in the face with his right hand. How hard can it be to execute simple hand-to-hand contact? Pretty tough, apparently.

A 40ft putt to move 1 off the lead! pic.twitter.com/ruf6pJvi3L

Fleetwood’s was brutal, but does it crack the worst high-fives of all time? We list our five favorites below. Did we leave any off? Send your best submissions to @golf_com on Twitter.

Oh no… It’s hard enough to connect when you’re going for the single high-five. Making it a double high-five increases your chances of botching it. There’s just no reason for this. Keep it simple, take your par and avoid a triple-bogey.

Ah, the classic chest bump combined with a high-five in mid-air. Always a good idea. Not!

Does this count as a high-five? Probably not. But it’s too good not to include. Bubba Watson goes for the handshake when Billy Payne isn’t ready, then shifts to Charl Schwartzel. (Is Schwartzel the most forgettable Masters champ in the last 30 years? Until Danny Willett happened, I’d say yes.) Billy tries to go for Bubba’s hand at the same time, then pulls it back and goes for the classic “I’m embarrassed” nose scratch and random face touch. He goes in strong once Bubba has donned the green jacket and redeems himself with a strong shake.

One main takeaway from this high-five fail deep dive: It’s not just the players that stink at high fives. Caddies are equally culpable. Paul Azinger follows up this epic fist-pump after an epic hole-out by trying the aggressive one-hander with his caddie. They fail to execute the first, second, third and fourth time. Eventually the caddie just walks away.

The GOAT. One of the biggest moments in golf history calls for a proper celebration. And while Tiger and Steve never quite mastered the celebration, this one is extra special. It will be replayed forever and ever, and there’s no way around this botched high five being etched into immortality.

Is this a bad high-five? No, in fact, it is not even a high-five at all. But I watched this video about 50 times and had forgotten how amazing this celebration was. Enjoy.