The Winner of ‘The Big Break’ Is Making a Splash at the Web.com Tour’s Q-School 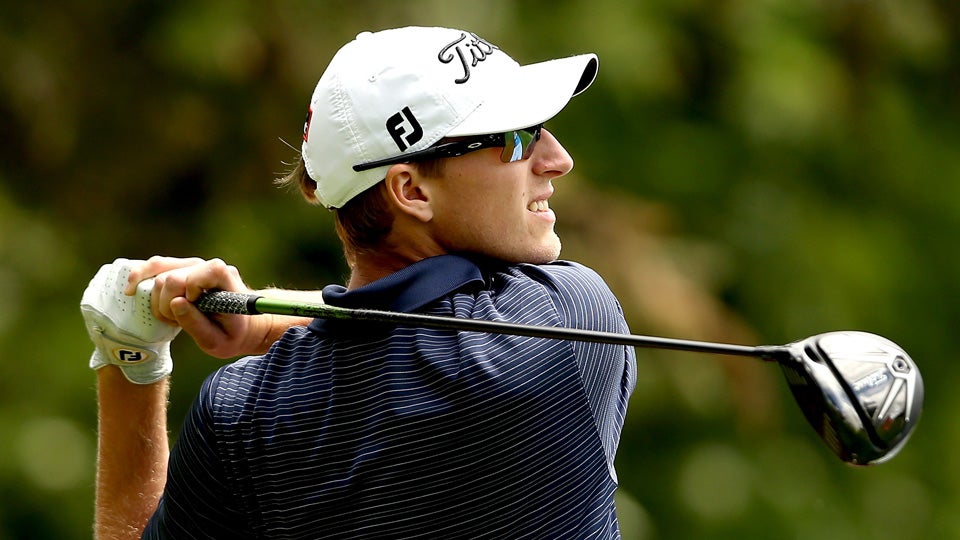 Richy Werenski hits off the 16th tee during the first round of the Colombia Championship at the Country Club de Bogoto on Feb. 5, 2015, in Bogota, Colombia.
Matthew Stockman/Getty Images

PALM BEACH GARDENS, Florida — Richy Werenski has already had “The Big Break,” but now he’s looking for His Big Break.

“They canceled it,” Werenski said Saturday.

Wait. You broke “The Big Break?”

“Yeah, I guess so,” Werenski said with a laugh.

There wasn’t a lot of laughing going on Saturday at PGA National, where one round remains in Q-School for the Web.com Tour. Werenski should’ve felt pretty good, though. He made six birdies in gusting winds and shot 68 on the Fazio Course. The other half of the field played the Champion Course, annual home to the Honda Classic.

The round vaulted Werenski, 23, into a tie for eighth place. Adam Svensson, who played PGA Tour Canada last season and finished ninth on the money list, is running away with Q-School. He shot his third straight 65 to reach 21-under par and open a slightly absurd eight-shot lead.

The Q-School winner is the only fully exempt player in this field. He’s good for the whole Web.com season. The finishers from second through 10th are exempt through the first two reshuffles—that’s where the players are re-ordered in priority based on their winnings. The reshuffles happen after four or five tournaments.

The finishers from 11th through 45 are exempt through one reshuffle.

Werenski lives in Bluffton, S.C.—the entrance to Hilton Head Island, basically. He already had a conditional exemption for Web.com because he finished 79th last year in his rookie season. The top 75 finishers were exempt. He just missed out.

Question: You probably know exactly how many dollars and cents you missed by, right?

Werenski: “Actually, I really don’t know. I just knew I was outside 75 so, whatever. It doesn’t much matter if I missed by a dollar or by 20 grand. I’m just trying to improve my status. I don’t know how many events I’d get in with conditional so it could not hurt to come. If I play well, it’d help. If I played bad, then I’d go with it. There’s still pressure, though.”

The PGA National Resort courses were where Werenski, a Georgia Tech alum, played for “The Big Break” episodes. He figures he’s played both courses about 10 times each—20 if you count junior golf. So he’s got some course knowledge advantage over most of the field. It showed, too, as he rolled in a slew of putts while his playing partners suffered numerous near-misses.

“The Champion is one of my favorite courses,” he said. “These greens are really good. They roll true. If you get the line and hit it there, it’s going in. It’s tough to get the line. That’s the hard part. I can see why guys struggle. They still fool me a bunch.”

Werenski holed a 15 footer for birdie at the par-4 ninth and a 25-footer at the par-4 11th, which played tough in a right-to-left crosswind.

It was a rugged day, no doubt about it, with winds far exceeding the 15 mph prediction. The flags stood straight out most of the day and the winds were consistently around 20-25 mph.

“There were a lot of crosswind shots,” Werenski said. “It was tough. It played hard and is going to play harder tomorrow.”

Spectators were scarce Saturday. Werenski had a gallery of one late on his front nine. It was Lee Bracken, his high school math teacher from Hilton Head, who is retired and now living in the area.

At the turn, Bracken said in an amazed tone, “I’ve seen only four holes so far and Richy birdied three of them.”

It was not as easy as Werenski made it look. He got to chat with the man he called Mr. Bracken after the round. Asked about his math teacher, Werenski said, “He’s good, he’s really good. He knows his stuff.”

So, Werenski was asked, did you add your scorecard correctly today?

Asked if he’d spent all those perks, he said, “Not yet.”

He said he gets recognized occasionally from his appearance on the show. Maybe more than he would’ve, he said, because it was the last one instead of a new series being churned out every six months.

He was a little surprised that the series was canceled after his appearance.

“I heard about it from the show’s producers on the grapevine after our final episode aired,” he said. “They kind of mentioned that the show might not go on.”

So your win might be historic, he was told.

And maybe more to come on Sunday.