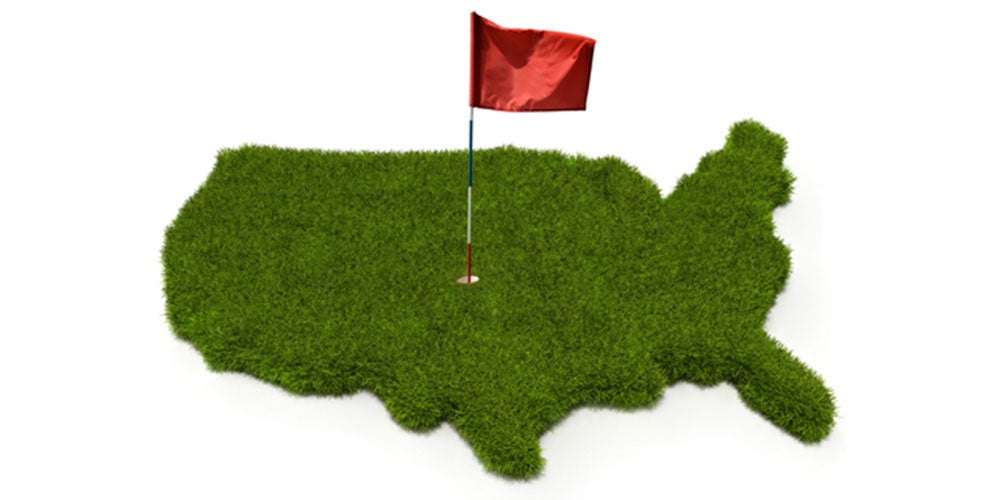 Having more than a quarter of your residents who regularly peg it helps your cause (take a bow, Minnesota). Hosting 18 national championships puts you in good stead (nicely done, New York). Spawning Donald Ross, A.W. Tillinghast and Tom Doak does not go unnoticed (props, Pennsylvania). And staging a PGA Tour event that attracts half a million fans? You da man, Arizona.

But how does California stack up against North Carolina? Is North Dakota golfier than South Dakota? And which state is the golfiest of them all? You deserve answers, America, and we’ve delivered them.

Pairing National Golf Foundation data with some subjective analysis from yours truly (I’ve played golf in all 50 states and at more than 1,500 U.S. courses), we calculated a golfiness rating for every state in the union.

Over the next five days, we’ll roll out our ranking in groups of 10, culminating with the Top 10 Golfiest States on Friday, July 3. (You can debate the merits of our ranking at your July 4 barbecue.) Did we undervalue your state? Did we rank another state too high? Stand up and be heard! Hit us up on Facebook or Twitter, or plead your case in the comments section below.

The crab cake capital’s unimpressive golfiness rating is hard to comprehend. The state sports wonderful Ocean City, with its plethora of fine courses, including the Links at Lighthouse Sound, and has serious history at such prestigious haunts as Baltimore Country Club (1899 U.S. Open) and Congressional (1964, 1997 and 2011 U.S. Opens). But its Avidness ranking is a woeful second from last. Folks must be too busy crabbing.

This tiny state lacks courses, which hurts its overall rating. But the Ocean State still shines. Newport Country Club played host to the first U.S. Amateur and first U.S. Open, both in 1895. One hundred years later, Tiger Woods won the Amateur there and, in 2006, Annika Sorenstam triumphed at the U.S. Women’s Open. Not a bad champions’ roll. Architect Donald Ross made Little Compton his summer residence. Native sons Brad Faxon and Billy Andrade carry on the tradition.

The Beehive State feels like it deserves a higher ranking. After all, the state and its colleges, notably Brigham Young University, have given us Johnny Miller, Mike Weir, Mike Reid and Bobby Clampett, among many others. Plus, it’s got terrific clusters of courses in St. George, the red rock country, and in and around Salt Lake City, with the imposing Rockies in the background. But the state’s low course total (115) keeps it from a higher ranking.

South Dakota is tops in the land in the Avidness category (it’s a wonder they don’t add a golfer to Mt. Rushmore). Sutton Bay is the state’s best course, a Graham Marsh design that recently replaced its Top 100 predecessor, which succumbed to a series of landslides. Brothers Tom and Curt Byrum were born and raised in Onida. Each won a PGA Tour event, oddly enough in the same year, 1989. My only experience with paying via an honor box and putting on sand greens came on a South Dakota nine-holer, Wall Community Golf Course.

From the superb collection of state park courses to the five-star luxury of the Greenbrier, the Mountain State offers something for all comers. The Greenbrier itself has no peer in the U.S. The resort dates to the 1700s and the golf is similarly venerable. Sam Snead was pro here in two stints that totaled nearly 50 years. Today, the Greenbrier’s Old White TPC hosts a PGA Tour event and among its summer residents are Tom Watson, Nick Faldo and Bubba Watson.

Astonishingly, the Peace Garden State finished second in the U.S. in the Avidness category. There aren’t many residents in North Dakota, but those who reside there seemingly all play golf — and a lot of it. Native son Jim Engh designed one of the state’s best public courses, Hawktree, in Bismark, and coming in 2015 is a completely new layout for Minot Country Club.

The Pine Tree State stands tall in the Legacy category, thanks to two presidents who summer there: George H.W. Bush (41) and his son, W. (43). They frequently teed it up at semi-private Cape Arundel, a classic Walter Travis design in Kennebunkport. Another president, 350-pound William Howard Taft, once took 27 strokes on Kebo Valley’s 17th hole in Bar Harbor. Samoset in Rockport serves up scenic seaside golf, but mostly, Maine appeals to leaf-peepers. Sugarloaf and Sunday River sport the best fall colors in the U.S.

Solid numbers in Household Participation Percentage and amazing natural beauty fortify the Gem State’s golfiness. But it’s one of golf’s greatest gimmicks that steals the show — the par-3 14th at the Coeur d’Alene Resort, a 1991 Scott Miller design. The hole features a movable, floating island green, accessible only by boat.

Home to the Robert Trent Jones Golf Trail, the first and still best golf trail in the nation, Alabama brought country club quality to the masses, in terms of conditioning, aesthetics and challenge, at venues in all four corners of the state. Its premier private club, Shoal Creek, in Birmingham, has played host to two PGA Championships and currently hosts the Regions Tradition, a Champions tour major. Jerry Pate (Alabama), Jason Dufner (Auburn) and Graeme McDowell (UA-Birmingham) are among the state’s collegians who have won majors.

Check back Wednesday for states 30-21!