The Storied Life of Arnold Palmer: Tips From The King 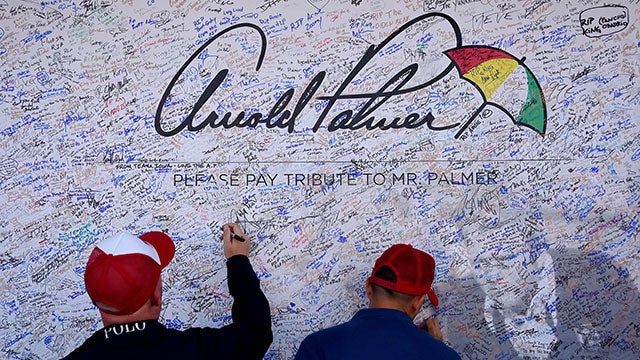 Arnold is still on our minds. Of course he is. The long goodbye. Yes, the man was 87. Still, it hasn’t been easy.

Silverado is where the lodge brothers gathered last week, Brendan Steele shooting 270 to win and earning $1.08 million, Phil Mickelson finishing four shots back, Tiger pulling out late, telling us his game was “vulnerable.”

If Arnold were alive today, he’d be writing Steele a congratulatory note. (Nobody understood the joy of winning more than Arnold Palmer.) He would have lingered on Woods’s use of the word vulnerable. (Being straight with his public had a lot to do with Arnold’s appeal.) He would have been pleased to see Mickelson playing in one of golf’s minor events. (Arnold played everywhere.) In the years when there was a senior event at Silverado, Arnold was a regular.

For decades now, the Tour has been trying to push all manner of statistics on us: GIR, sand saves, putting, driving distance. The Tour in Arnold’s day was all about money, character and getting the ball in the hole as fast as you could. To Arnold, the meaningful numbers from last week’s Safeway Open would have been the 270 and $1.08 mill. The reason Arnold could sell wine with his name on it was because he was a personality.

RELATED: All of GOLF.com’s Best Arnold Palmer Articles and Videos

In 2012, ’13 and ’14, I saw Arnold semi-regularly for a book I was writing. Along the way, I became interested in the difficult relationship he had with Ken Venturi. They had been close friends in the 1950s and ’60s, but then Venturi turned on him. It was a one-sided falling out, rooted in a murky rules dispute at the 1958 Masters. Trying to get a handle on it, I spoke to various people, including Venturi’s first wife. Conni Venturi was a remarkable beauty, and she and Ken had a rocky, decade-long marriage. When I saw her, she was living in Napa, not far from Silverado, in a trailer park.

The verbal pictures Conni painted of Arnold linger in my mind. Arnold at the hotel bar, taking over a small stage with other players, making music and having a good old time. A shirtless Arnold in his motel room, the door open, watching Saturday-morning cartoons with Conni’s son and eating cereal. Arnold at Silverado, silver-haired and tan, playing in a senior event there in the early 1980s. That was the last place Conni saw Arnold. The lasting memory for her from that brief encounter was the enduring warmth of the man.

At Augusta National and Bay Hill, in the offices of the USGA and the PGA Tour, there have been earnest discussions about how best to honor the life and times and example of Arnold Palmer. These conversations are focused on Big Picture ideas. (Who will be the honorary starters at the Masters?) All of that is important, but the most significant thing golf can do, and the most significant thing every player can do, is to try to carry himself or herself with Arnold’s example in mind. After all, people don’t come to tournaments and watch them on TV to see who will lead the Tour in GIR. They come for the golf, and for the personalities behind the golf. Four years ago, a few days after the U.S. Ryder Cup loss at Medinah, my friend Mike Donald, a former Tour player, and I drove to Latrobe to see Arnold. It was the first stop on a long, sporadic, lost-in-time road trip we made to see golfing icons from the last days of persimmon. Over the course of our four hours with Arnold on that Friday in October, he talked about the Ryder Cup, Woods, Fred Couples and various other things, some of them intensely personal. He talked with immense candor and depth and insight. What luck. It might have been the last extensive interview Arnold gave.

He was newly 83 and recently had become the sixth athlete to receive the Congressional Gold Medal. His body was starting to give out, and there was a distinct and troubling wobble in his walk. But his mind and his memory were sharp. He remembered Mike’s playoff loss at the 1990 U.S. Open at Medinah. He analyzed Tiger intimately. He said, “Could he go back to where he was? He could. Do I think he will? No.” He talked about Fred’s recent election to the World Golf Hall of Fame, and how he had voted for him. Arnold was posing the questions and offering the answers. He wasn’t hiding his personality. The total opposite. At Arnold’s memorial service, one of his grandsons, Sam Saunders, spoke beautifully and shared the best advice he ever received from his grandfather: “‘Talk less, listen more.’” Arnold practiced what he preached. But on that October day four years ago, Arnold talked easily with Mike and me. He was hiding nothing.

Or almost nothing. In fact, there was only one moment in which Arnold hesitated, and it related to Sam. Mike, a superb and natural reporter, had asked Arnold if he was giving Sam the kind of golf and life lessons that Arnold had received from his own father.

After a long pause, Arnold said, “It’s a little different; I’m not his father.” He didn’t say much after that.

Earlier he had spoken vividly about his life as a bachelor. Later he gave us an animated tour of his house and another of his workshop. (“When I get pissed off at everybody, I come in here and work on the clubs.”) His fiscal conservatism was a running theme. (Speaking of a desperate Tour player who had run through tens of millions of dollars, Arnold said incredulously, “Where is that money?”) He remembered the aftermath of piloting an F-15. (“I threw up all over myself.”) He was so unvarnished.

But for whatever reason, Sam’s golf was the one thing Arnold didn’t care to discuss. My feeling, and I’m guessing here, was that the subject hit too close to home to him, that he wanted Sam, then 25, to approach golf as he did as a young and newly married tour pro, with all-consuming passion. But who could match that passion? Who has ever loved golf as much as Arnold?

A lot of what we talked about that day was from a lost world. There was the double-date fishing trip that Winnie and Arnold took in the mid-1950s with U.S. Open winner Tommy Bolt and his wife, Shirley. It ended, in Arnold’s telling, with the Bolts “throwing knives at each other” and Arnold saying to his wife, “Babe, we gotta split.”

RELATED: Arnold Palmer’s Wine Label Was Simple, Just Like He Was

He talked about driving the Tour with Winnie in a camper as newlyweds and a Baton Rouge-to-Pensacola caravan with other players. This is straight from Arnold: “We’re watching the car in front of us. All of a sudden there are sparks coming out of the back of that car. I’m watching. And I thought, I’m seeing something I don’t understand.

“I pulled up closer to them and there’s [Al] Besselink hanging out of the back door of the car, grinding a wedge on the highway. That’s what the sparks were.” Mike said, “Al Besselink’s a crazy man.”

I loved the way Arnold said that, the cool ease of it. It was so…real. His personality was on display.

It has often been said that Arnold and TV came of age together, and you could say that Arnold’s public life was a long-running TV show. I suppose that’s true, except TV has a way of making real things seem fake and fake things seem real. Arnold wasn’t faking anything.

One summer day in 2014, I was with Arnold in his office in Latrobe. We had been talked about Ken and Conni and various other things. At one point, I asked Arnold if he was satisfied with his life.

Of course he wasn’t. He wasn’t flying his own plane anymore. He wasn’t winning golf tournaments. He had enjoyed a great run, but he was winding things down. He wasn’t ready to wind things down.

For reasons I don’t understand, a recording of that October 2012 interview is on my iTunes playlist and sometimes when I go jogging it suddenly comes on, on the heels of Al Green or Joan Armatrading or somebody else. Courtesy of shuffle, Arnold’s foghorn voice slowly describing Al Besselink’s backseat grinding will suddenly be in my ear again. Arnold has left us, yes. But he’s not going anywhere. The broad forehead, the flop of hair on it, the bull neck: the man’s on our Mount Rushmore. Not as a king. The King. He half-hated that whole thing. He earned his way there. He never forgot Latrobe, a workingman’s town if ever there was one.

With his end nearing, of course Arnold was unsatisfied. Of course. I mean, who would want to close the book on that life?

The best we can do—you, me, Tiger, Brendan Steele—is take an example from it.

On Saturday at the Masters last year, Mickelson wore a pink shirt in Arnold’s honor. He had been with him on the previous Tuesday night, at the champions dinner. He told some people that he feared that that champions dinner might be Arnold’s last.

“It’s not my color, it doesn’t look good on me, but I had a premonition after spending time with Arnold,” Mickelson said on that Saturday. “He liked wearing this color.”