‘The Squeeze’ Makes Its Television Debut Tonight on Golf Channel

Shooter McGavin of “Happy Gilmore”, played by Christopher McDonald, is one of the most memorable characters in the history of golf films. Tonight is your chance to see McDonald, who happens to own a pretty decent golf swing, in a slightly more serious golf role.

McDonald stars in “The Squeeze”, a movie directed by former ABC Sports golf producer Terry Jastrow that tells the story of the relationship between a young, aspiring golfer and a savvy gambler. Based on a true story from Jastrow’s experience in the golf industry, “The Squeeze” airs at 8 p.m. and 10 p.m. EDT tonight on Golf Channel.

Straight from the press release, here’s a more detailed synopsis of the movie: 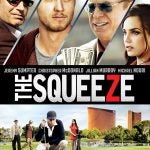 “The movie is based on a true story and was written and directed by Jastrow, who produced or directed coverage of 62 major championships (U.S. Open, Open Championship, PGA Championship), and was a seven-time Emmy winner over the course of his 22-year career. For the movie, Jastrow made it a prerequisite to cast a lead character with a legitimate golf acumen in order to ensure an authentic storyline that golf-enthused viewers would take seriously. The cast features Christopher McDonald – known among golf circles for his memorable role playing Shooter McGavin in “Happy Gilmore” — who plays the cunning gambler, starring alongside Jeremy Sumpter — a scratch golfer — who plays the young golf prodigy.”

And here’s a look at the trailer.