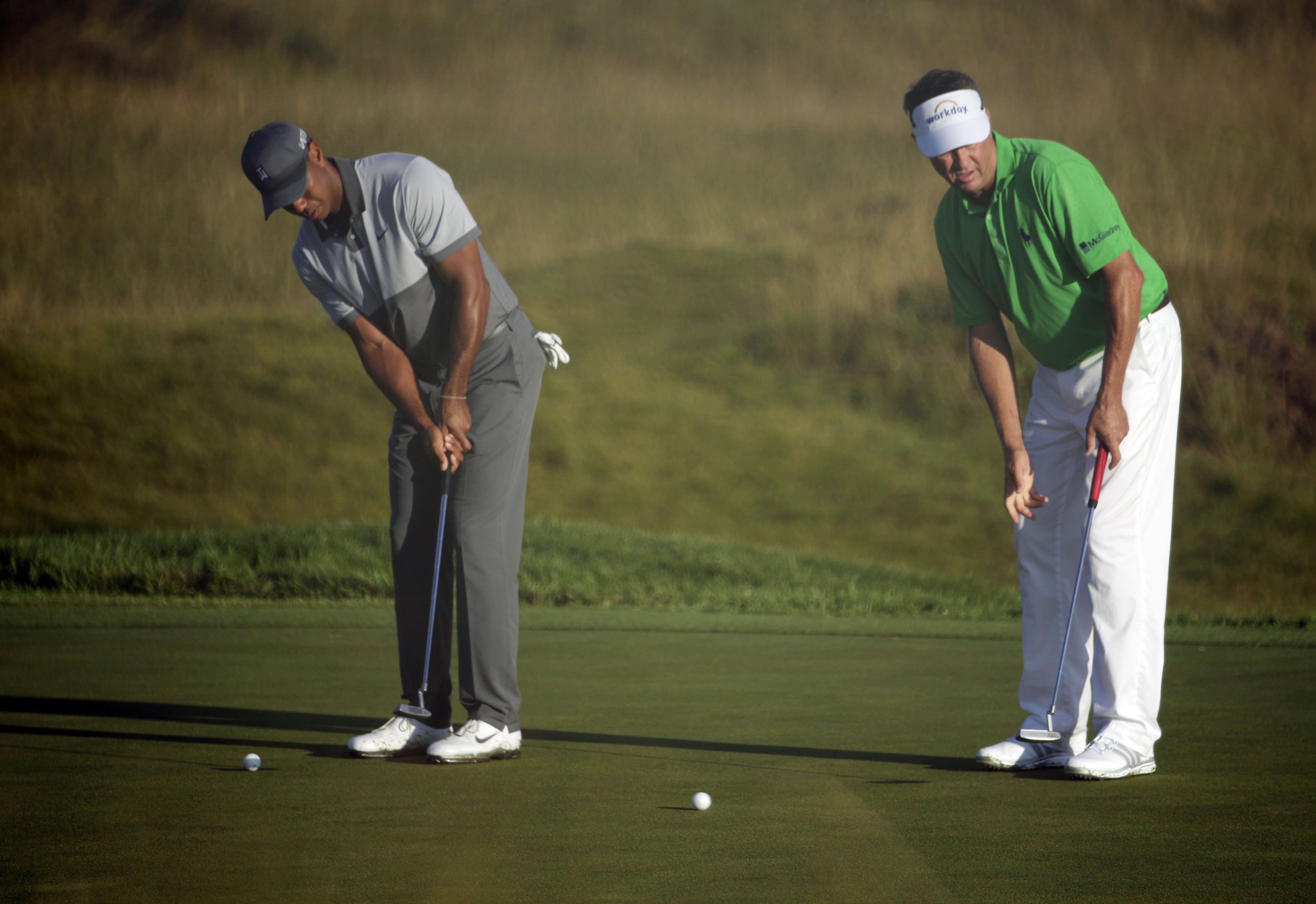 Love and Woods warmed up side by side at Wyndham.
Chris Carlson / AP

The next year or so will be a wild ride for Davis Love, and not just because he leads a more-interesting-than-you-might-guess life as a hog-riding, church-going, book-reading 51-year-old grandfather.

By winning the old Greensboro stop last week, he earned himself a place in the first two tournaments in the FedEx Cup non-playoffs. Come April, courtesy of his win, he’ll try to make his first cut at Augusta since (this may surprise you) 2007. Five months after he returns to Augusta, Love will be at the epicenter of the golfing world as the captain of the U.S. Ryder Cup team. Sometime in the fall of 2016 he most likely will be announced as a member of the World Golf Hall of Fame’s class of ’17. Twenty-one PGA Tour wins, with a PGA Championship and two Players titles and two stints as Ryder Cup captain? PF — Post-Fred — that’s a no-brainer.

And all the while he will have to contend with the exact question that flummoxed Tom Watson when he was assembling the 2014 Ryder Cup team: What do I do about Tiger? As the philosopher Yogi Berra (or was it John Daly)?) used to say, The more things change, the more they stay the same.

Love and Woods have a history. In 1996, when Tiger was in the final months of his vaunted amateur career and Davis was at the height of his powers as an uber-long professional and persimmon holdout, Love told me something about Woods you could not possibly forget: “He’s already better than me.” I was struck by the comment, for any number of reasons, one of which was, Woods hadn’t done much of note in his amateur visits to the professional game. But Love, who has shown me that he has a discerning eye as a golf scout, could see way beyond a few internship results. He saw early what we all saw later: Woods was so superior in every facet of the game that to win he didn’t have to do anything special. At least, not special by his standards.

A few months after Davis made that comment, Tiger won his first Tour event, beating Love in a playoff in Las Vegas. I was with Davis a few days later on Sea Island, the insulated coastal Georgia golf enclave where he lives. An old-man country-clubber there was on the verge of saying something racist about the Las Vegas victor. Davis cut the man off at the pass. (You can call Love an underachiever if you like, but he has spent his career saying and doing the right thing.) Later, Davis told me that Tiger had hit a smarter tee shot in the one-hole playoff, a 3-wood to his driver. That allowed Woods to play first to the green, and in match play, being on the green first can be a big advantage.

The Ryder Cup is match play. Along with Walter Hagen and Bobby Jones, Woods is the greatest match-play golfer ever. In 2012, when the U.S. had yet another Ryder Cup loss, Love was the captain and Woods was the team’s No. 1 player. Woods went 0-3-1 in his matches and was heading home shortly after his odd (to me) concession of a missable putt for a halve to Francesco Molinari. That Ryder Cup had extra importance to Woods because he was attempting to claw his way back to respectability after the hydrant scandal. The day after the defeat at Medinah, Davis said to me, speaking of Team USA, “I hope he knows how much we like him.” Woods never wanted to be part of the club when he was the undisputed heavyweight champion of the world, but his view was different by 2012. The political advisers, after any raging controversy, always tell their clients the same thing: Win back your constituency first. That’s what Woods was trying to do at that Ryder Cup, and Davis was there to greet him.

Right about now, you most likely are thinking that this is crazy-talk, that Tiger Woods, ranked south of nowhere and yipping simple chip shots and driving it crazily offline, couldn’t possibly be part of a Ryder Cup discussion for a team that will be announced a year from now. But that’s the point here. He will be. He will be because of Woods and Love and their shared history. Because Woods is still Woods, and his place on the team will be beyond meaningful to both the PGA of America and NBC Sports. Woods moves the needle. That’s been true for the past 20 years, and it will remain true for the next decade. All Woods has to do is show occasional flashes of his old self, as he did last week, and that will be more than enough to justify his place in the discussion. And once he’s in the discussion, anything Woods-related takes on a life of its own.

In victory, Davis’s beautiful play at the Wyndham Championship and the enduring quality of his swing were both appropriately lauded. But in the end his return to the winner’s circle could not be separated from (first) Woods’s appearance in that same tournament and the nine-hole practice round they shared, and (second) Woods’s surprising position two strokes out of the lead through 54 holes.

There was commentary about how Davis had helped Tiger in that practice round, but Love made the point that it was a two-way street. On Sunday, on the driving range before the final round, Davis and Tiger talked about how one of them should go out and win himself a golf tournament for the first time in forever. That generous attitude is part of Davis’s nature, and part of the manners-first culture in which he was raised. It doesn’t come as naturally to Tiger, but Tiger Woods, as his dismal 2015 season shuts down, is not Tiger Woods 2005 or Tiger Woods 1995. He played in Greensboro for the first time because he has discovered that he needs golf as much as golf needs him. That’s why he has a real chance of becoming a solid top-20 player, right alongside Matt Kuchar and Justin Rose and Brandt Snedeker.

Davis is going to be talking about Tiger’s chances of being a captain’s pick for the Ryder Cup team until the day he announces his selections. He knows what Woods’s place on the team will mean for Woods and for the Ryder Cup and possibly for the team’s chances of winning. World ranking will mean almost nothing to Captain Love at the end of the day. Why? Because he and Tiger have intertwined personal histories — as we all do — and those histories cannot be ignored. They are part of us, and make us do the things we do.