The Other Player of the Year: U.S. Senior Open Champion Gene Sauers 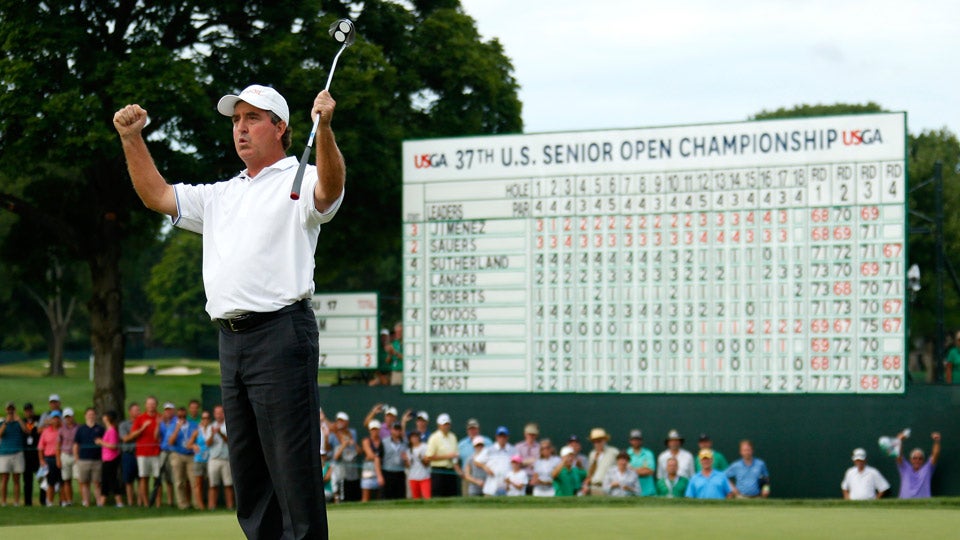 Gene Sauers reacts after making a par putt on the 18th green to win the 2016 US Senior Open at Scioto Country Club on August 15, 2016 in Columbus, Ohio.
Getty Images

By the dog days of 2005, Gene Sauers—an old-school, wet-a-line Georgia-boy touring pro with a country-club mullet and a near-perfect homemade swing—had had enough.

He was a 21-year-old kid when he joined the Tour in 1984, and for a long time he led the life. Dinners with his buddies on Saturday nights. Looking up his payday in USA Today on Monday mornings. Good times. But did he really appreciate his good fortune? He’ll tell you: Probably not.

Sauers won workingman’s tournaments in 1986, ’89 and ’90. He contended at the 1992 PGA Championship. Ten years later, he won the Tour stop in Calgary. But then came 2005. The year, for him, was short and dismal. His game was bad and his attitude worse. He missed the cut in Reno in August, and he was gone. He was not yet 43.

Sauers didn’t hit a single shot for the rest of the year, and then he kept going. The years rolled on by, and before he knew it, 2006 had turned into 2010. He didn’t watch or play or even talk about golf. His clubs rested peacefully in stacked, horizontal bins, like dead bodies in a morgue, untouched. He didn’t keep up with his old on-the-road buddies. Done and done.

Tammy—who had married Gene (to borrow a phrase) for better or worse but not for lunch—was worried. Gene didn’t much care. He was home, home for the duration. Their three boys were as drawn to the open sea and the fish in it as he was. Could he go on like this forever? Hell, yes.

Then came April 6, 2011. In February and March, no matter how many blankets Tammy put on her husband, he could not keep warm. Something was wrong. But on that Wednesday morning, he was burning up. On his arms and legs, he was alarmed to see rough black spots growing before his eyes. “It was my skin burning from the inside out,” Sauers told me recently. After several frantic calls, Tammy drove him 350 miles at breakneck speed to the Duke Medical Center in Durham. A dozen doctors there poked and gawked at him. Nobody ever definitively identified the issue. A doctor told Tammy, “I give him a 25 percent chance of survival.”

Sauers spent most of the next two months at a hospital near his home in Savannah, enduring a complicated and painful series of skin grafts, the large, charred-black swatches “shaved off with a cheese grater, through all seven layers of skin, ’till there was nothing but red, raw flesh,” in Gene’s description. The photos on his phone are gruesome. He couldn’t get out of his hospital bed. His legs atrophied, and he lost 30 pounds. He tried to take a photo of the thousand bugs congregating in the corner of his hospital room. You’re hallucinating, Gene.

But he also had a dream—a vision!— about playing tournament golf again. The recovering golfer could close his eyes and imagine himself making an even better swing—rounder and flatter—posting good scores, cashing good checks. Maybe it was drug-induced delirium. Maybe it was desperation; he had been hemorrhaging money. Whatever, after a seven-year sabbatical, he suddenly wanted to play again.

In October 2011, he entered three Web.com events and missed three cuts. He had no clubhead speed, but his game still showed life. “I still had my eye-hand coordination,” he told me. “I still had my talent.” You couldn’t get him off the range.

Sauers turned 50 on August 22, 2012, played in five senior events before the year was out, and finished 72nd on the money list. Players he barely knew hugged him tight. He made $893K in 2013, $992K in “14 and $650K in “15. He lost the 2014 U.S. Senior Open to Colin Montgomerie in a playoff. This August, at the U.S. Senior Open at Scioto Country Club in Columbus, Gene buried a five-foot par putt on the last to win by a shot. Arnold Palmer wrote him immediately afterward and said, “You deserve a lot of credit for getting back in the game and playing so well after all the health problems you went through.” Seven weeks later, Arnold was dead. He had won the Senior Open, too.

I asked Tammy to compare Gene the young Tour player with Gene the young Champions Tour player. Turns out, you can’t. “He takes nothing for granted now,” she said. Why is gratitude life’s hardest lesson to learn?

Earlier this year, Tammy and Gene were driving from Biloxi, Miss., to Savannah. They had reached Tallahassee around midnight when the Fray’s 2005 hit, “How to Save a Life,” came on. They both love the song. They heard the familiar refrain, and Gene said, “Turn it off.” He was sucking for air, and tears were streaming down his face. It was early April, and in that car, anyway, Gene Sauers was already the golfer of the year.