The Internationals Might Have Boycotted Presidents Cup Without New Format 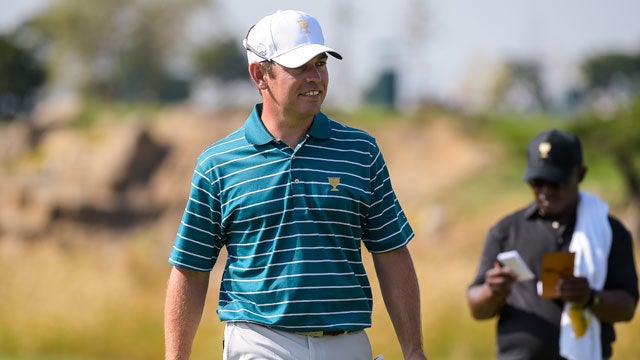 Oosthuizen on the new Presidents Cup format: "Had it stayed at 34 points, it would have been a massive decision as a team, but I don't think that we would have played."
Getty

Earlier this year, Bubba was telling people he had no desire to fly 8,000 miles to Incheon, South Korea, for the Presidents Cup. His elders were able to talk him off the ledge. Still, you couldn’t really blame him. To play in another road-trip no-juice golf exhibition after four grueling majors, followed by the FedEx Cup non-playoffs, at the end of a season that has no end? Gerry Lester had better things to do.

Anyway, B. Watson was talking about the old Presidents Cup, the one that existed before the PGA Tour commissioner, Tim Finchem, made the unilateral 12th-hour decision to lop four matches off the competition, reducing the total points in play from 34 to 30.

Finchem, true to form, never stated his actual purpose. He didn’t need to. The matches have been wildly lopsided—USA! USA!—and the event was in danger of succumbing to a fatal case of indifference. Playing for fewer points would give the less-deep International team more opportunity to bench its weaker players. The Internationals and their captain, Nick Price, wanted the point change. NBC Sports and Golf Channel, broadcasters of the matches, would, of course, welcome a more competitive event. But Finchem’s point-shaving move, announced just six weeks before the opening bell, was wildly unpopular among the American players and their captain, Jay Haas. Finchem despises controversy. So why did he do it?

The Cup will be decided on the course in South Korea, not on a spreadsheet, however. And while history records the past, it does not forecast the future.

MORE: Every First-Round Match and Tee Time at the Presidents Cup

Some of the American players and caddies had a theory: The Internationals had threatened to boycott the matches unless the terms were changed. The loudest voice for change, from what I heard, belonged to Louis Oosthuizen. To try to solve this modest golfing mystery, over Labor Day weekend I drove from my home in Philadelphia to Norton, Mass., to see sweet-swinging Louie O. at the Deutsche Bank Championship.

As it happened, I broke a tooth on the way up, on a well-done thin-crust Margherita pie in Westport, Conn. I Krazy-Glued back the missing piece (not recommended), found affable Lou in the cart barn of TPC Boston and asked if there was any truth to the report of a threatened strike. He half-smiled and said, “We had a proper conversation.” He was referring to a meeting in Akron, Ohio, on August 5, at the Bridgestone WGC event. On that day, Finchem met with Price, Oosthuizen, Jason Day and other International players.

Oosthuizen and the others told Finchem that the event was dying, that benching players was a basic part of all team sports, and that having 12 golfers playing for 28 points was the fundamental formula that made the Ryder Cup so competitive. “We told him to copy something that works,” the South African golfer said.

I asked Oosthuizen if his fellow South African, the industrialist Johann Rupert, a man embedded in international golf and in the lives of many South African golfers, had given him any good advice. For years, Rupert’s message to Finchem has been that the commish has been effective for the PGA Tour but at the expense of global golf. Following the 1977 Ryder Cup, after the Americans trounced the Great Britain and Ireland team once again, Jack Nicklaus met with Lord Derby, the president of the British PGA, and suggested that the GB&I team expand its reach to include players from the Continent. In 1979, that meant Seve. In time it meant Langer, Olazábal, Sergio, et al. Jack’s magnanimous gesture gave birth to the modern Ryder Cup.

“Johann said, “If you really believe in it, stick to your guns,”?” Oosthuizen said.

And then came Louis’s moment of truth: “Had it stayed at 34 points, it would have been a massive decision as a team, but I don’t think that we would have played.”

A couple of days later, while sitting in a fully reclined chair, I asked my dentist to put on Golf Channel so I could listen to Jay Haas make his two picks. Phil Mickelson was his 11th man and Jay’s son Bill was No. 12. Dr. Bookman, a recovering golfer and an avid sports fan, asked, “What is the Presidents Cup?”

The 2017 edition is at Liberty National, a short ferry ride from Wall Street and where Mickelson is a member. My guess is that Phil will captain the home squad there, and that the Presidents Cup will finally come into its own. Especially if the Americans never get to 15 points this year.