The haves and the have mores: The Tour’s elite players make big money and aren’t afraid to spend it

This is the fifth installment in our seven-part The Modern Pro series, in which GOLF.com is breaking down what it means to be an elite professional golfer in 2018. In previous editions, we broke down players’ swings, bodies, brands and lives. This week we examine their money.

It was a typical day for Dustin Johnson and Brooks Koepka, similar to many they’ve shared together in the past few years. DJ cruised over to his buddy’s house in Jupiter, Fla., driving a murdered-out Range Rover that glides on 22-inch rims. In the back of the Rover was a $10,000 road bike so light it could be picked up with one finger. The last two U.S. Open champs were going for a ride with the trainer they share, Joey Diovisalvi. Johnson was in a bit of a hurry because he had a lunch meeting with two financial advisors who had flown in from Dallas for the occasion. No, they were not pushing wheelbarrows full of gold coins.

Koepka’s house backs up to the Intracoastal Waterway, and his garage was a riot of stand-up paddleboards and other toys, including a Mercedes AMG G 63 SUV. (The BMW sedan was parked in the driveway.) Inside, the house was redolent of lemon and new money. Koepka purchased the house from another major championship winner, Keegan Bradley, then hired Graeme McDowell’s wife Kristin to remodel the interior. (She has her own design firm and first met McDowell when he hired her to work on one of his houses.) Koepka’s bachelor pad has a sleek look, with stone, metal and modern furnishings. Adjacent to the kitchen, Koepka installed a wine room big enough to house hundreds of bottles and an inviting seating area. Sitting on the table was the ultimate in accessories: the U.S. Open trophy. 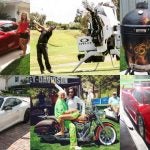 You may also like Tour pros and their toys: How pro golfers live the high life
​

Standing on the pier in the backyard, Koepka offered a guided tour of the Tour pros clustered along the water: Rickie Fowler’s old house, Steve Marino’s place, Davis Love’s spread. Directly across the water was the house Johnson paid $4.5 million for years ago, but has since outgrown; a few bends down the Intracoastal he and fiancée Paulina Gretzky are now building from the ground up their own Xanadu, a project that has been ongoing for more than a year and still has a ways to go. Dustin, how many square feet will it be?

Johnson said he was most intimately involved in the design of the closets.

Koepka is a clotheshorse, too. The discussion of his favorite designers was interrupted by the doorbell. A woman brought in dozens of cardboard take-out containers, each containing a different entrée to be sampled. Koepka was testing out meal-delivery services, searching for the right one to cater to his strict diet. The swordfish was excellent.

This is the rarified, lemon-scented air where the top pros dwell. Johnson, 33, is the number one player in the world and an average year for him is now $20 million in on- and off-course earnings. Phil Mickelson hasn’t won a tournament since 2013 but his annual haul is roughly twice Johnson’s. Meanwhile, Tiger Woods is approaching $1.5 billion in lifetime earnings. Rory McIlroy is not yet 30 but is already worth hundreds of millions of dollars, and in a moment of candor once said the $10 million bonus paid to the FedEx Cup champ no longer piques his interest.

From a competitive standpoint, the money may be a good thing; with no earthly concerns, the top players are freed up to chase history. And many of the game’s biggest earners are committed to a redistribution of wealth: Woods, Mickelson, McIlroy and Jordan Spieth, among others, have their own foundations dedicated to large-scale philanthropy. Between concerts, events, charity outings, scholarships and appearances, the humanitarian dollars pile up, too.

It was the TV contracts signed during Woods’s peak that took golf from a niche sport into a big business; Mickelson was cagey enough to understand this and once personally thanked Woods for “jacking up the purses.” He discussed it on Feherty last year, noting how in his first victory — the 1991 Northern Telecom Open — the entire tournament purse was $1 million, divvied up among 73 non-amateurs. The winner’s haul at last week’s Waste Management Phoenix Open: a cool $1.24 million.

As Woods lost his way, more than a few observers assumed a market correction would follow, but that has not materialized: Tour purses continue to rise and eight-figure endorsement deals remain commonplace for the game’s top players. McIlroy signed an extension with Nike just before the 2017 Masters, a long-term deal that pays him a reported $20 million annually.

Clearly the brands that invest so heavily in the top players — equipment manufacturers, financial companies, automakers — also enjoy a payoff. Viewers who watch golf tend to have disposable income and a weakness for cars, watches, liquor and the latest, greatest golf equipment. For luxury advertisers, the golf audience is a coveted one. 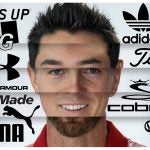 You may also like Marketing the Modern Pro: How social media and self-promotion has changed the branding game

And so Johnson and Koepka and other athletic, telegenic stars remain in high demand. As the money flows they invest not only in jets and houses and cars but also in specialists (like Joey D. and the food-delivery lady and ShotLink number-crunchers and osteopaths and short-game gurus) who help them optimize their performance, thus allowing them to win more, which makes them even more coveted by advertisers.

It has become the perfect, recurrent storm for golfers who want to cash in on their talents.