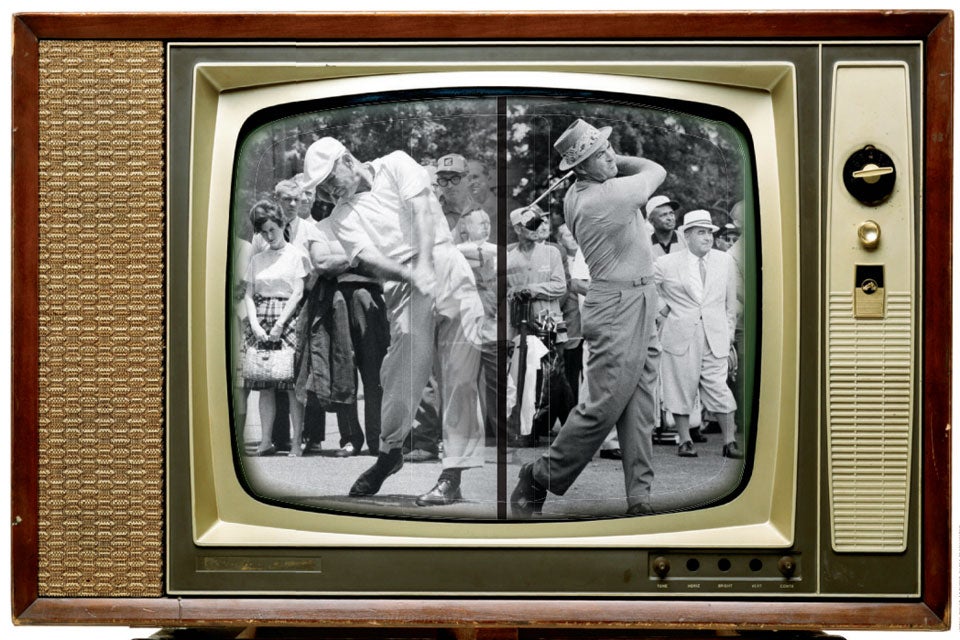 Hogan and Snead, both 51, tee off in their historic final face-off, at Houston Country Club.
Golf Magazine

It was, in a sense, the Match of the Century. Two of the greatest players in golf’s long history faced off in an 18-hole stroke-play competition. Appropriately, it would be seen by one of the largest TV audiences recorded at the time for a golf event: 3.47 million viewers, according to Nielsen. Who wouldn’t want to watch Ben Hogan go mano a mano with Sam Snead?

In 1961, the first Shell’s Wonderful World of Golf challenge match aired. The series, which ran for nine years and was later revived for another decade, from 1994 to 2003, pitted notable players of the day against one another on courses around the globe. Not all of the showdowns had the firepower and appeal of Hogan/Snead, who combined to win 16 majors and 146 PGA Tour events. The series’ second and third installments featured dust-ups between Ted Kroll and Chen Ching-Po and Jay Hebert and Flory Van Donck. But some—like the Gene Littler/ Byron Nelson battle at Pine Valley, in 1962—were indelible television. The Hogan/Snead match was effectively an exhibition, an entertainment. And there wasn’t much money or glory involved: $3,000 to the winner, $2,000 to the loser; no green jackets or glittering trophies; only a few column inches in the sports pages. That took nothing away from its significance, symbolic or otherwise. Given their larger-than-life personas and competitive records—against the pros of their generation and between each other—Hogan and Snead could have played for marbles on a muni in Muncie, Ind., and they’d have commanded the attention of even the most indifferent golf fans.

It was a given that these two proud and fierce competitors would play the match as though it were a major championship, and they did. Contested at the Houston Country Club in May 1964 and airing the following year, it marked the last time these Goliaths of the game would meet in competition. And unbeknownst to them and to everyone else at the time, the clash would have momentous consequences for the future of the game.

A bit of transparency. I was a young writer on Shell’s Wonderful World of Golf, having been hired only two weeks earlier for my first job in what would become my lifetime profession. It was a baptism by fire.

The show was the brainchild of Monroe Spaght, then president of Shell USA and an ardent golfer. Spaght was spinning off the first such made-for-television, one-on-one links series, All-Star Golf, which was produced by Chicago’s renowned public-course operator Joe Jemsek and his partner, Pete DeMet. From 1957 through 1963, they aired a series of 18-hole matches between the game’s best pros (including Snead, Gene Littler, Cary Middlecoff, Julius Boros and Tommy Bolt), with most of the battles played on Jemsek-owned tracks. The production values of the black-and-white show were primitive. Hole diagrams looked as though they’d been pulled from a pre-teen’s coloring book, and only a scant few camera shots of flighted balls were captured. Jemsek himself said of those pioneering but crude shows, “We were making home movies.” Despite that, All-Star Golf had attracted a substantial viewership. Spaght noted the success and decided to take it a step—in fact, a few giant steps—further. The Shell show matches would be played in every corner of the world, on famous courses, whenever possible, and filmed in vibrant color. The distinguished golf writer Herbert Warren Wind was brought in to consult. He came up with the basic format, suggested which courses to play, and was instrumental in recruiting the storied player of the 1920s and ′30s, Gene Sarazen, as host. The Squire appeared on camera in tailored knickers, a smart sport coat, shirt and tie, and a panama hat. Spaght burnished Jemsek’s concept, and it worked. Landing the elusive Hogan only heightened the show’s luster.

Bantam Ben, who won his nine major championships between 1946 and 1953, had become increasingly reclusive in the ′60s. At most he was playing four tournaments a year, and he showed little interest in the perks that come with legend status: designing courses, commenting for TV, or promoting a tournament in his name. I once asked Hogan if, as a Tour player, he ever considered himself an entertainer. His response was a curt, unequivocal “No.” So it came as a surprise that he would deign to participate in a glitzy exhibition. Shell had a coup, and, as was often the case with the stone-faced but mesmerizing Texan, Hogan became the story.

He wasn’t doing anyone a favor, mind you. Quite the opposite. To prop up a struggling line of golf equipment he had launched in 1955, Hogan had a pressing need for publicity. He also needed cash, and he got it. A $25,000 appearance fee he pocketed on the side was kept secret for years. Maybe he had a payroll to make. In any case, Spaght was willing to break precedent. Everyone else played only for prize money, plus expenses.

Sam Snead wasn’t as exclusive or expensive as Hogan. Around the time of the made-for-TV match, the ageless Slammin’ Sam was still playing the Tour—and still playing it at a high level—and he would win his 82nd and final Tour title at the 1965 Greater Greensboro Open, just two months shy of his 53rd birthday. Snead just loved to play, especially against the Hawk, “because he never says anything to you, except now and then, “You’re away,”” Snead once explained. Indeed, Hogan stayed true to form. During the Houston match, they conversed little. Play got under way at 9 a.m. on a gray day with a forecast of heavy rain. A downpour started in the middle of the second hole, which the warriors played out. Tee shots were hit on the third, but thunder and lightning then arrived with a particular Texas violence. The course was evacuated. A few of us, including Hogan and Snead, took refuge in a room just off the pro shop. Hogan sat quietly with a towel wrapped around his shoulders. Snead, on the other hand, was rarely quiet—the Virginia mountain boy was a colorful storyteller, whose yarns rapidly escalated from raunchy to filthy. With us in the room was our script person, Edna Forde, a proper Irish woman, and Maureen Orcutt, a champion amateur golfer who, four decades earlier, had become one of the first women in the country to write about sports, when she covered golf for the New York Times. Orcutt had an air of early-twentieth-century propriety, but never mind that—Snead got hold of a banana and waved it around as a lewd prop. Not surprisingly, his suggestive groaners left the ladies limp. Hogan managed only a strained smile, then exited the room.

The rain delay lasted about four hours. When play resumed on the par-5 third, Hogan hit first. He roped a 4-wood onto the green to within 25 feet of the hole. Heads shook in amazement—after such an interminable wait, how could he deliver such an explosive strike? For the rest of the day (they could only squeeze in 11 holes before dark), and on the final seven holes played the following day, Hogan striped each shot, hitting every fairway and green in regulation. Not a single approach finished more than 25 feet from the pin, and many were well inside that. It was a vintage display of precision ballstriking and flight control, and from a man of 51. Hogan summoned his famous fade only a couple of times. The peerless golf strategist had decided that the layout mainly required a draw.

At the outset, Hogan was restless with the wait between shots—generally about 10 minutes, which was the time it took to reposition the production’s seven cameras used in the shoot. Eventually, he took it well enough in stride to almost make a joke. One of my jobs was to ascertain which club each player was using for a given shot, information that I then phoned to Sarazen and our play-by-play announcer, George Rogers. On the par-5 12th, I figured Hogan would be hitting a wedge. I said to him, “Wedge?” “Equalizer,” he replied, with a barely perceptible smile. It was the name he’d given to his Hogan-brand pitching wedges. I thought, Well, now—Ben Hogan making a joke while playing competitive golf. Different. He got what he was after. On the air, Rogers noted that Hogan would be hitting “his Equalizer.” There it was: publicity for his company.

Hogan’s astounding display of shot-making was marred only by his putting, which tormented him late in his career. Here was a man who stepped up to every full swing with the utmost confidence, yet stood over his putts for so long and with such stillness that it appeared as though he’d fallen asleep. The somnolence stirred Texas-style encouragement from the gallery: “C’maun, Ben, take the dern thing back.” And, “Poor sucker cain’t get it storted.”

Snead also played well, his superbly graceful, balletic swing in good form. He always liked to remind everyone that he defeated Hogan the three times they met in playoffs—once at the 1954 Masters. In Houston, the Slammer was a stroke up through four holes, and he was tied with Hogan at 1-under through nine. But Snead felt the vibes of the entire gallery—about 2,000, the largest for any of the 91 original Shell matches—rooting for its native son. He responded with cavalier golf. At the short par-4 seventh he tried to drive it over tall trees that cornered a dogleg-left. He didn’t make it and barely managed to save par. Although unshaken by Hogan’s ballstriking, which he had seen many times before, Snead was simply outplayed over the two days it took to film and finish the match. With a birdie at the 12th, Hogan snatched the lead by a stroke, and ended up winning with a 69 to Snead’s 72.

On its face, the match seemed like a mere sideshow, albeit a high-end one. Yet it became the prelude to something new and lasting. When Shell shelved the series in 1970, Fred Raphael, its producer, began to mull new ventures. Nearly a decade later he established an event for Tour pros age 50 and over who’d retired from competition. Sports nostalgia was in the air. Major League Baseball had begun fielding old-timers games, which fans loved. Raphael thought about staging something for aging stars like Jimmy Demaret, Julius Boros, Don January, and, of course, Slammin’ Sam. He remembered how Hogan and Snead, both 51 at the time of their showdown in Houston, played so well, and figured that other veteran players still had enough game to put on a show. The idea crystalized at the 1976 Masters, as Raphael sat with his old pal Sarazen. “Well, time for the legends to hit,” Sarazen said, pushing up out of his chair to join Snead and Byron Nelson for ceremonial drives off the first tee. Eureka!

In 1978, Raphael aired the first Legends of Golf tournament, a two-man best-ball competition that in its first year saw Snead birdie the last three holes to propel him and his partner, Gardner Dickinson, to a victory over Australians Peter Thomson and Kel Nagle. It would become a ratings hit, leading in 1980 to the maiden event that evolved into the Senior PGA Tour, which we now know as the Champions Tour. Raphael’s flash of genius may have struck at Augusta National, but it was the throwback play of Hogan and Snead at Houston Country Club that eventually begat the tour now regarded as golf’s ultimate mulligan.