Branden Grace made history during Round 3 of the 2017 Open Championship at Royal Birkdale by becoming the first male player to shoot 62 in a major championship. Naturally, players, fans and media alike flocked to praise Grace…but another figure couldn’t help but get caught up in the melodrama over Twitter.

That’s right — when a giant goes down, the world can’t help but notice; and unfortunately for him, Johnny Miller was that giant. With Grace’s 62, his long-standing record of lowest score at a major (the 1973 U.S. Open at Oakmont Country Club) no longer holds court.

What’s more is Miller was calling the action on Saturday, and so had to both witness the collapse of his feat firsthand, and attempt measured coverage of it. Enter the tweets.

“It’s no gimmie two I’ll tell you that.” – Johnny Miller grasping at straws

Sergio on Grace’s 62: “Probably everybody is happy in the world other than one guy, Johnny Miller.”

Johnny Miller about to go full Buffalo Wild Wings commercial on @BrandenGrace on 18. If you’ve seen the commercial, you get it #62watch

“It was about time, but this is no guarantee,” says Johnny Miller as he sticks another pin in his Branden Grace voodoo doll.

Scoring conditions at the Open. Johnny Miller will be sweating and making excuses all day. Easy set up, Only par 70, etc. #TheOpen #62 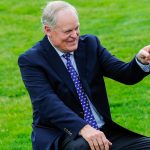 You may also like Johnny Miller on Grace’s 62: ‘It was set up really, really easy’

Of course, the story was about Grace’s incredible play Saturday at Royal Birkdale: a bogey-free round with eight birdies to make history. His peers made sure he knew how big of a deal that was.

Hate when people say, well conditions r easy right now. Plenty of times in the past conditions have been easy too, hats off to u Brandon #62

Somebody had to do it! Congrats to @BrandenGrace on the impressive round. #62

Awesome round of golf @BrandenGrace, HISTORY! Got to sit back and watch the entire thing. Now that’s how you move on moving day!

Unreal 62 by Gracie with Johnny Miller on the call. Perfect. #theopen