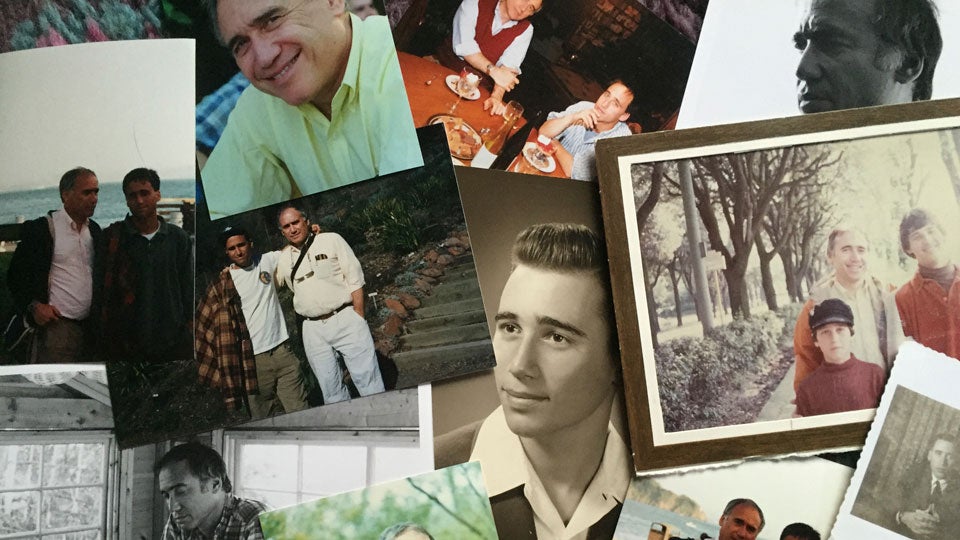 The author's father, Richard, did not share his son's liking for the game.
Courtesy of Josh Sens

A year ago this week, I was putting out on 18 at a sleepy course in Scottsdale when a call came from my childhood home in Massachusetts, informing me of bleak news about my father. He’d been hospitalized with kidney failure.

I was still wearing my golf cap and collared shirt when I showed up the next morning, off a redeye, at his bedside. The room smelled of sickness. My father’s arms were bruised from needle pokes and prodding, and his face was puffy, like a beaten boxer’s.

When his eyes flickered, I leaned in and he looked up.

“How’d you play?” he whispered.

Five days later, he was dead.

At this point, narrative convention suggests that I digress into gauzy recollections of boyhood summers spent at my father’s side, smacking range balls under his firm but kind instruction, or hustling down a fairway, struggling to keep pace with him and his friends. But I have no memories like that.

The up-from-nothing son of immigrants, my father lived his 80 years without ever setting foot on a golf course. The only time I saw him swing a club was when he took aim at a clown’s nose on a putt-putt track in a cheesy southern New England beach town.

Raised in the post-Depression-era Bronx, he was a rabid sports fan and an omnivorous athlete, feeding his free time with outdoor urban staples such as sandlot baseball, stoop-ball and pick-up hoops. His heroes were Lou Gehrig, Joe Louis, Jackie Robinson. Golf lay beyond his interests and his understanding. His image of the game was reduced to caricature: He saw it as an emblem of unearned privilege, and a polite excuse for segregation. Never mind that Van Cortland Park was a quick skip from the low-rent apartment where his family lived. It might as well have been Augusta National. I’m pretty sure my father also thought that golf was boring. Mostly, though, the game repelled him: It ran against his idea of America as melting pot.

I didn’t learn about those feelings until my early teens, and my father only let me in on them indirectly. Though he and I connected over sports, we never spoke of golf. There was no reason. I didn’t play or watch it. I barely knew of anyone who did.

One afternoon, though, I overheard my father talking to a neighbor about a private golf club not far from us, a stiff-lipped enclave that didn’t admit blacks or Jews. Normally reserved, my dad was getting worked up about the subject. Who could play a game that embraced such customs? The longer he went on, the more I found myself growing indignant, too.

At school the next day, I relayed to a black friend what I’d heard about the club, and we decided, in our juvenile quest for justice, that the best way to rectify a wrong was to sneak onto the property and play a round. Not long after, clutching a quiver of borrowed irons, we hopped a fence and tossed down balls on the first fairway we found.

Looking back, I realize, it must have been a Monday. The course was empty, which helped us not get caught but also had a downside: My buddy and I could have used some swing tips. We whiffed and chopped and topped. On edge and inept, we finished three holes, maybe. Our self-appointed higher purpose notwithstanding, it wasn’t any fun, until, by quirk of fate or random muscle movement, I caught one flush.

If this were a movie, the footage would slow, the soundtrack would soar and the camera would focus on a teen boy, mouth agape, watching as his shot traced an impressive arc, flying over water and settling a few feet from the pin.

You can see the plot twist coming: I was hooked.

Over the years, as I fell ever-deeper for the world’s most delightfully infuriating game, my father did what any loving parent would have done: He met me where I was. Though he held on to his fundamental gripes, we found ways to connect over the game through conversation. For him, the mental side of golf became a source of fascination. In what other sport could psychic fault lines so completely ruin a player in his prime? The fevered tribalism of the Ryder Cup bemused him. The Tiger Woods sex scandal underscored in his mind the double standards of a moralizing public that embraced other philanderers as old-school bon-vivants.

That I shared some of his views didn’t stop me from teeing it up every chance I could. My father never judged me for it, just as I never rubbed it in by reminding him that he’d unwittingly delivered me into the game.

Last week, as we prepared to mark the anniversary of my father’s death, my family celebrated my son’s 11th birthday. Like his older sister and his late grandfather, Leo is a dabbler of an athlete. He has tried golf, but its main appeal for him is the chance to steer a golf cart.

The day before his party, though, Leo surprised me by asking if we could hit the links. We drove into the Northern California foothills to a nine-hole, par-3 whose rainbow coalition of regulars contrasts sharply with my father’s image of those who play the game. Leo played like all beginners. He whiffed and chopped and topped. But on the 7th hole, by quirk of fate or random muscle movement, he drained a snaking putt, the kind of shot that can lead to a lifetime of addiction. He laughed. We high-fived.

Later, over ice cream, I asked Leo about the round and his SportsCenter highlight.

I suppressed my urge to lecture. Among the things that parenthood teaches is the limit of our influence over our children.

Besides, I figured, he’s young. He’ll come around.