Ousted PGA of America Ted Bishop said he had not been drinking before calling Ian Poulter a “lil girl” and that people at the PGA used the incident to get him fired.

In an interview with Jeff Ritter in the February issue of Golf Magazine, Bishop said his punishment — removal from office– was an extreme reaction to his tweet, which was a response to Poulter criticizing Nick Faldo on Twitter.

Bishop also said that his comments were not nearly as bad as Patrick Reed using a gay slur at the HSBC Champions in Shanghai. (Reed, who admonished himself with the slur following a missed putt, later apologized.)

“Take Patrick Reed as an example. Patrick’s remarks were far more inflammatory than my remarks,” Bishop said. “My youngest daughter Googled ‘Patrick Reed’ and ‘insensitive gay remarks,’ and she said there were 145,000 results. She Googled ‘Ted Bishop’s Twitter remarks’ and 10,600,000 popped up. When I talk to people with the PGA Tour about how they would handle players who had tweeted far worse things than I did, this was really an extreme reaction.”

The United States’ poor showing in the Ryder Cup and the criticism of Bishop’s hand-picked captain Tom Watson were still in the news on Oct. 23, when Bishop sent his fateful “lil girl” tweet. In the interview, the 60-year-old Bishop, who co-owns the Legends Golf Club, a 45-hole complex near Indianapolis, talks at length about the fallout from his social media misstep.

That night, you also wrote on your Facebook page, “Really? Sounds like a little school girl squealing during recess. C’MON MAN!” Did you have any beef with Poulter prior to this?

Our paths had crossed. I congratulated him as we were standing on the 18th green watching the final match unfold at the Ryder Cup [at Gleneagles]. I had no animosity. But based on Poulter’s social media history, I felt like [my tweet and Facebook post] were in line with some of the barbs he would send out.

Are people too sensitive about what’s said on social media?

I think political correctness has reached an interesting level in this country. This makes me sound like an old man, but when I was growing up in the ′60s in Indiana, women had no opportunities to compete in athletics. Back then, people talked about throwing like a girl, running like a girl, and these weren’t meant to be derogatory comments toward women in any shape or form. It was just a societal term. That’s all changed, and I realize that. 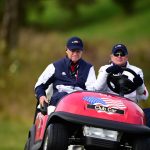 You may also like Tom Watson Has Ryder Cup Regrets, Says Ted Bishop

Do you think people at the PGA wanted you out and saw this as an opportunity?

Yeah, I do. As the events unfolded, I might have been naïve about some of what was going on around me. The PGA of America gave me a lot of flexibility and freedom to say whatever I wanted. I knew there were times when I got close to the line, but I felt I never crossed it. This is just my nature. That’s who I am and what I do.

Had you ever been previously warned or disciplined for controversial remarks, on social media or elsewhere?

Bishop received more than 1,000 letters of support following his firing, and also got some encouragement from Phil Mickelson.

What players reached out to you?

Phil Mickelson did. He basically said, “Hey, as someone who has said a lot of things over the years that I would like to take back, I know how this stuff goes.” He also said that it’s no reflection on who I am and what I did in my time with the PGA of America. Davis Love and Steve Stricker said the same type of stuff. [Tom] Watson calls me almost every week just to see how I’m doing.

You can read the full interview here.

Was the PGA of America right or wrong to fire Bishop over his “lil girl” tweet? Join the debate in the comments section below.