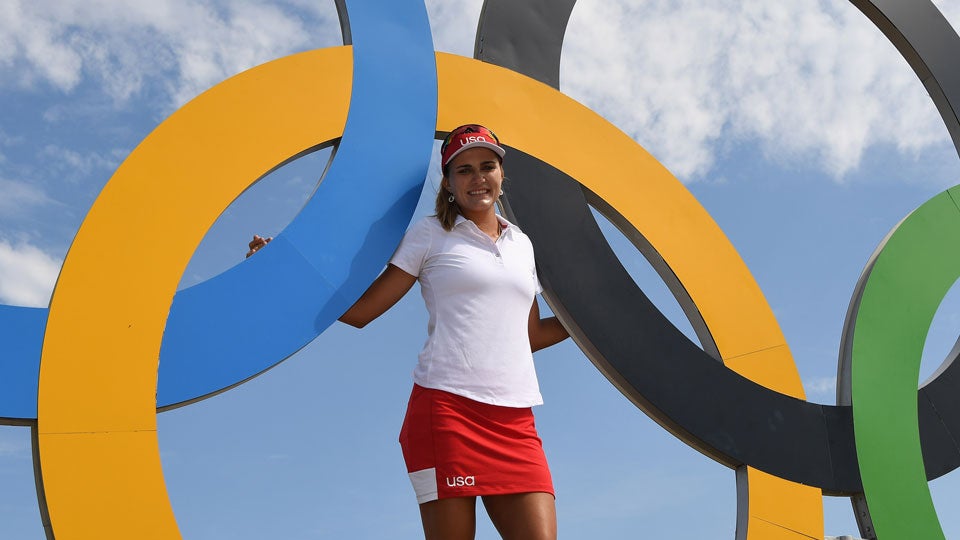 Lexi Thompson cruised to victory in the Kraft Nabisco Championship on Sunday, firing a 4-under 68 to put three strokes between her and second place finisher Michelle Wie.
Getty Images

She already has a major win and monster length. Now, Lexi Thompson, 21, hopes to add a gold medal to her résumé as she takes on the world in Rio. Let the Games begin!

Some top pros elected to skip this year’s Olympics in Brazil. Not Lexi Thompson. She’ll be in Rio, no two ways about it. America’s golf sweetheart explains what winning gold would mean, and why she can’t wait to play for her country—mosquitoes be damned.

I’ve never been to Brazil. I’m looking forward to it. I heard it’s a beautiful place, and the course is brand new. There’s been a lot of stuff in the media about Zika, but I think the Olympics will be well prepared for it, and I’m absolutely not missing this opportunity.

My caddie, Benji Thompson, [no relation] is excited to be going as well. I’ve worked with him for two or three years. My parents will be down there, too. I don’t think my brothers will come, but my parents would simply not miss it for the world. On the LPGA Tour, we also have the Solheim Cup and the International Crown, which is the U.S. against seven other countries. The Olympics will be less of a team event, though, and more individual, so it’ll be a bit different. Still, there’s nothing like wearing the red, white and blue.

Whoever plays for the U.S., I’m sure we’ll be hanging out when we’re not on the course. We’ll be together, bonding with all the other athletes. I’m not sure where we’ll be staying. As of now I have a place in the Olympic Village and a place off-site, too.

I know Rickie Fowler pretty well, with the Cobra-Puma and Red Bull connection. We’ve done a few photo shoots and commercials together. We’re friends. We played at Medalist [Golf Club, in Hobe Sound, Fla.], and I played all the way back with Rickie and a few other people. It wasn’t exactly the fairest tee placement. [Laughs]

My favorite memory of watching the Olympics is Michael Phelps winning all those gold medals. It’s so cool to watch the athletes from other sports. If I get some off time in Rio, I’ll watch swimming or gymnastics.

Winning gold would be bigger than anything I’ve done in my life. That’s what I’m going for. Would I cry on the medal stand? Yeah, most likely. I’m pretty passionate when it comes to representing my country.

I don’t speak other languages, but I’ve been to at least 15 countries. I’ve won in seven of them: Dubai, Japan, Mexico, Thailand, Malaysia, Korea and the United States. I wouldn’t mind winning in one more country, in Brazil. I like my chances.