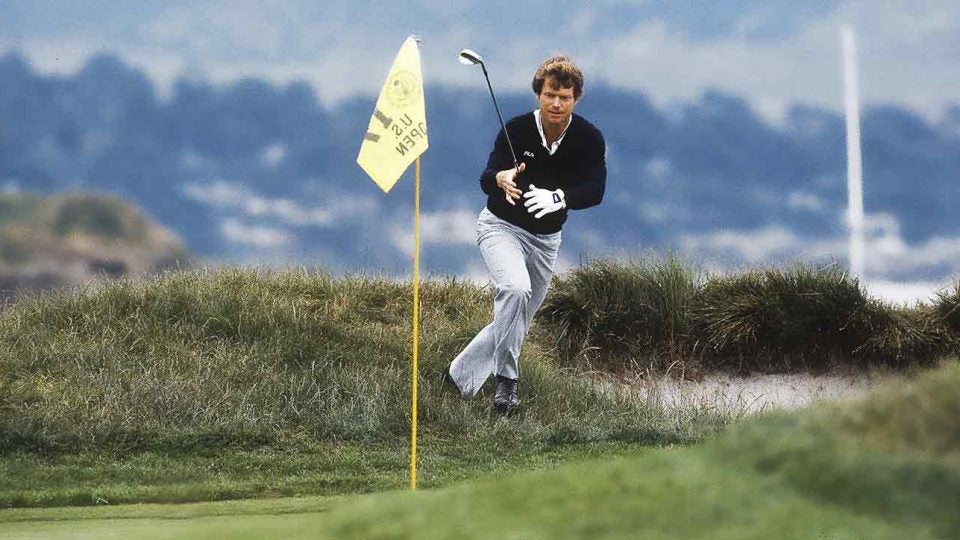 Remember the one played under a death threat? Or the really windy one won by Tom Kite? At GOLF, we love a good anniversary, and with its storied history the U.S. Open offers up all sorts of them. But this year is different. Scan the record books and you’ll find that, dating back every five or 10 years from 2017, golf’s national championship has produced something magical.

As routinely brutal as Opens at Oakmont tend to be, this was the quintessential Open of attrition. Second-round leader Cabrera’s chances took a brutal hit when he carded a 76 on Saturday, ceding his lead to Aussie-American Aaron Baddeley. Sitting between them on the 54-hole leaderboard was some guy named Woods, who’d already won three times that year. Instead of playing for survival, Cabrera went on the attack, making five birdies against four bogeys on Sunday and becoming one of only two players to break par that day. It was enough for his first major victory.

From round one, this was Woods’s to win. Then just 26, Tiger was flat-out crushing his Tour competition. He’d just defended his title at the Masters (for his seventh major) and opened the Open with a first-round 67. Eighteen holes later, Woods was three clear of the field. After 54 holes, the lead was four. On Sunday, without much difficulty, Woods worked his way through the beast that is Bethpage. Though he shot over par (72) for the first time that week, the result was never really in question. Woods captured his second U.S. Open in three years and become the first player in three decades to win the first two legs of the Grand Slam.

Kite himself can’t believe a quarter of a century has passed since he hoisted the trophy at Pebble Beach. Spend time with him and he’ll prove it. To this day, the Texas native remembers every detail from his final-round 72 at a fiercely windswept Pebble: “I had one foot in and one foot out of the sand.” “Fourteen was playing straight downwind.” “On 16, my tee ball just chased through to the rough.” “The gallery reacted like I hit it to two feet.” Kite remembers it better than anyone—but you may not recall how that wild Open began.

In round one, journeyman Andy Dillard, who’d competed in just two Tour events in the previous 24 months, blitzed the first six holes, making birdie at each. It’s a feat still unrepeated in the history of the Open, and for Dillard it was a savior.

“I needed that start because I knew Titleist paid a bunch of money if you got on TV,” Dillard recalls. “When I got home I asked Willie Wood if I got on TV. ‘Get on TV,’ he said. ‘You were TV!'”

Ultimately, Dillard faded, but Gil Morgan took off. Early in the third round, he became the first player ever to reach double-digits under par in a U.S. Open. Hanging back on the leaderboard, Kite was playing trouble-free golf—even in the gusty final round, when many people thought the wind made Pebble unplayable. But Kite pushed on with a chip-in at 7, a bomb for birdie on 12 and another bird on 14. “After that, I felt the tournament was mine,” he says. And it was—a two-stroke win for the 42-year-old grinder.

“The round was so difficult,” Kite remembers, “so mentally, physically and emotionally exhausting.

It’s like, ‘WHOOO!’ After I signed my scorecard, everybody was out on the green, congratulating me, and only then it was, like, ‘Wow, I’ve finally won a major championship.'”

Everyone knows The Shot. What some might not know is that Watson’s epic chip-in for birdie on the 17th at Pebble Beach didn’t just vault him to his U.S. Open win; it robbed Jack Nicklaus of his chance at a record fifth U.S. Open title. The Golden Bear began the final round three shots back (and three groups ahead) of Watson, but with five consecutive birdies on the front nine he surged into contention. Nicklaus eventually signed for a 69—and waited. That’s when he heard the roar. Sports Illustrated’s Dan Jenkins wrote that the only thing keeping Watson’s ball—chipped from an impossible lie long and left of the 17th green—”from running all the way to the Lodge” was the flagstick, and that the odds of him pulling it off were “1000 to 1.” The win gave Watson his first U.S. Open and sixth major. A month later, he’d follow it up in style with a victory at the British.

On paper, Green’s 1-shot victory suggests an implicit kind of pressure. This was, after all, the U.S. Open, and the 31-year-old had yet to win a major. But that’s just paper. Green’s win may have, in fact, been earned under the greatest pressure in golf history. Heading to the 15th hole on Sunday, Green was approached by USGA officials and given the stunning news that, minutes before, the FBI had received a threat on his life. Three men, the FBI was told by a female caller, were waiting for Green on 15, with plans to open fire on him. Nursing a one-stroke lead over Lou Graham, Green, remarkably, chose to play on. Accompanied by a phalanx of armed officers, he hooked his tee shot on the 15th hole, but scrambled for par; birdied the 16th and parred 17. After an understandably yippy bogey on 18, Green was rushed to the scorer’s tent—with a win, a to-this-day-unsolved mystery and the title of Biggest Badass in the Game.

Sense a trend here? Pebble Beach was, and still is, the site of some of the Open’s most incredible theatrics. In ’72, it showcased a push-and-pull back-nine battle between Nicklaus and some of the game’s legends. Jack finished each of the first three rounds with a slim one-stroke lead—the definition of “hanging on.” But a final-round double bogey on six moved him closer to a group of chasers that included Arnold Palmer, Lee Trevino and Johnny Miller. Once again, Pebble’s par-3 17th was the scene of the tournament-clinching shot. Nicklaus launched a perfect 1-iron toward the bunker-protected green, where the ball bounced hard once, smacked the flagstick and came to rest inches from the hole. The tap-in secured his third career U.S. Open.

Jack having already won the ’72 Masters, the whispers began: Could he pull off the calendar-year Grand Slam? Despite a final-round 66, he lost the British—and his Grand Slam dream—to Trevino by one stroke.