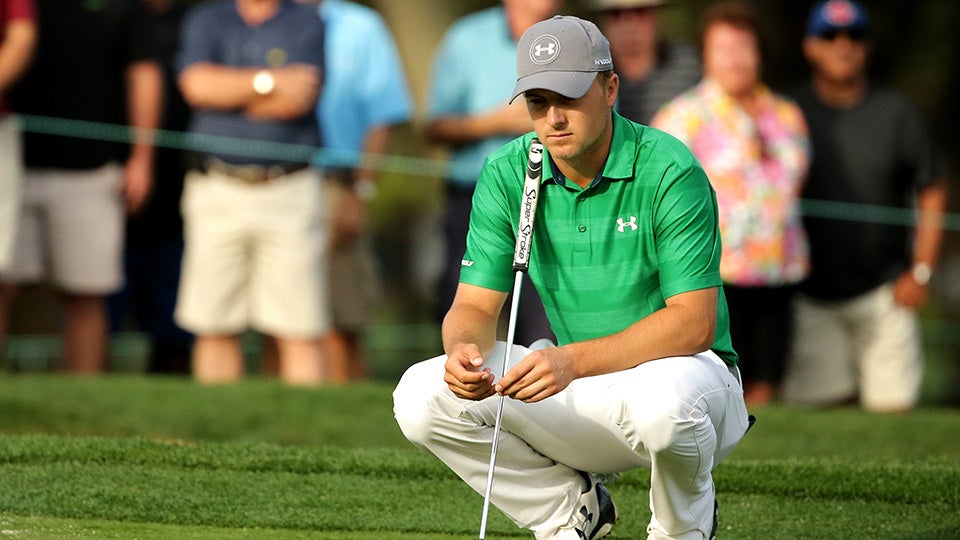 Jordan Spieth prepares to putt on the tenth green during the first round of the Valspar Championship at Innisbrook Resort Copperhead Course on March 10, 2016 in Palm Harbor, Florida.
Mike Lawrie

Golf is hard, even if you’re number one in the world.

Jordan Spieth shot an opening round 76 at Innisbrook on Thursday to kick off defending his title at the Valspar Championship. The 22-year-old struggled two weeks ago at the Northern Trust Open at Riviera, carding a first round 79. Those performances have prompted criticism from the media, who have anointed Spieth with a ‘hangover year’ that followed a spectacular 2015 early in the season.

Not so fast, says Spieth. In an interview after his subpar round, Spieth defended his shaky play, chalking it up to “one of those days.”

“It’s so tough on some of these putts down the hill to hit them as hard as we have to hit them,” Spieth explained. “… You don’t see it. It’s an adjustment. It’s something you got to trust. It’s one thing to practice on the greens and get used to it, it’s another to actually do it.

“What good is kicking the door other than hurting my foot and (having to) withdraw? I’m kidding. No, I’ll be fine.”

That last quote was what the PGA Tour led with on Twitter, and Spieth was not impressed.

“@PGATOUR seriously?” Spieth tweeted. “That’s the quote you’re going to use out of that article?”

The tweets have since been deleted, but not before numerous outlets grabbed screenshots of the exchange.

He didn’t stop there. Later, when an Instagram user called Spieth out on having a garbage game when his putting is off, Spieth chimed in himself.

“Couldn’t be farther from the truth troll…go do research before hating,” said Spieth.

It’s the kind of emotion and presence we haven’t seen from Spieth in awhile, who has said previously he’s trying to cut back on his social media use.

Even if he does decide to go cold turkey after this episode, it’s nice to know other pros have his back — especially when that pro is World No. 3, Rory McIlroy.