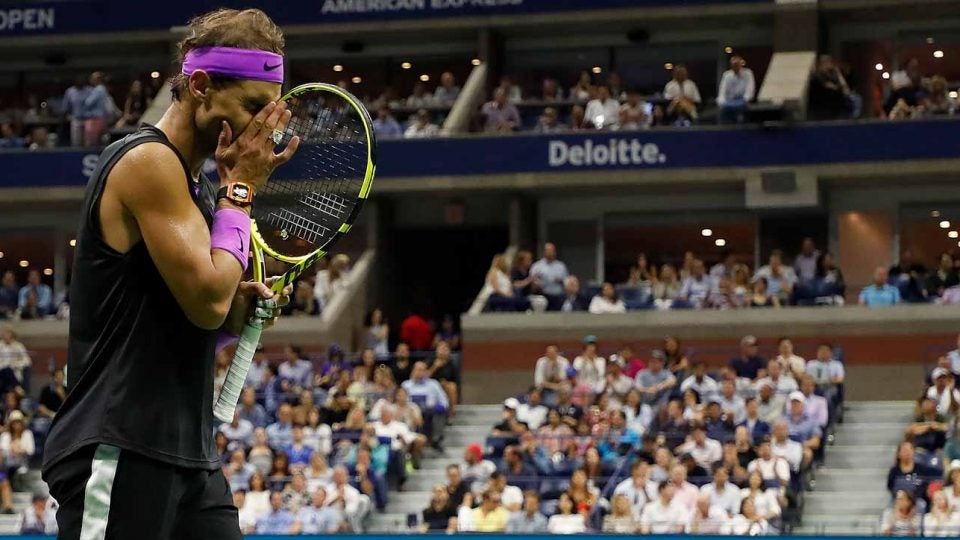 Rafael Nadal was hit with a time code violation during the final of the 2019 U.S. Open tennis tournament.
Geoff Burke-USA TODAY Sports

With the brief PGA Tour offseason in effect last weekend, many golf fans (and Tour pros) instead tuned into the men’s final of the U.S. Open tennis tournament to see Rafael Nadal survive a five-set thriller with Daniil Medvedev to win his 19th grand slam title. The win moves Nadal one short of Roger Federer’s grand slam record, but it was a bizarre occurrence in the very first game of the match that had golfers talking.

Down 40-30, and fighting to hold his serve, Nadal was hit with a time violation by the chair umpire. In U.S. Open tennis, players are limited to 25 seconds between serves. Shot clocks on the courts keep players informed about their pace, but Nadal, who is known for taking his time between serves, went over the limit.

News
This easy fix would solve pro golf’s slow-play problem in a week, according to Darren Clarke

The result was a loss of serve. Though Nadal fought back to win the point and the game (and eventually the match), the violation could easily have cost him the game.

Nadal was not thrilled with the decision, and it drew some criticism from former pros, but it exemplified a major difference between tennis and golf.

In this incident, the umpire penalized one of the greatest players of all time in the final match of one of the biggest tournaments in the game. And all for what golfers would call “slow play.”

As many people pointed out, it’s highly unlikely that such a penalty would be dished out on the PGA Tour, especially to such a high-profile player in a high-stakes situation.

PGA Tour pro Roberto Castro agreed, writing in a tweet, “If you don’t think you can enforce pace of play penalties in the BIGGEST of moments tune into the US Open tennis. Wow!”

If you don’t think you can enforce pace of play penalties in the BIGGEST of moments tune into the US Open tennis. Wow!

Time delays just cost Nadal a game when serving for the US Open. Remember that when you hear that we can’t issue stroke penalties in golf because it might happen at a crucial moment.

I follow a lot of golf people on this here website and I think 98.7 percent of them made the “a time penalty? Can this happen in golf” joke at the exact same time.

There is one recent example of a slow penalty at one of golf’s majors, an equivalent stand-in for the U.S. Open in tennis, which is one of tennis’ four grand slam events. It occurred at the Masters in 2013, the biggest stage in the game. But it was given to 14-year-old Tianlang Guan. The penalty nearly ended Guan’s tournament, as it occurred on his 36th hole, and he eventually made the cut right on the number.

That move drew widespread criticism, with many arguing that a high-profile player would never have received the same treatment.

And that brings up the most commonly argued point about slow play in professional golf. The rules aren’t the problem, because common-sense rules governing slow play already exist. The problem is inconsistent and selective enforcement. Until all players legitimately fear the consequences of slow play, they will never speed up their pace.