Shots of the year (and how to hit them!): A Spieth splash buries Berger

Over the course of 10 days on GOLF.com we’re rolling out the 10 best shots from the 2016-17 PGA Tour season — plus, with the help of our Top 100 Teachers, what pearls of game-improvement wisdom you can glean from these sweet swings. Here’s today’s installment; scroll to the bottom of this article for more outrageous shots.

As he did en route to his first Tour victory (the 2013 John Deere Classic), Jordan Spieth holed out from a bunker on the last hole to win his 10th (the 2017 Travelers), this time during a playoff with Daniel Berger. It was a shot in the arm for a slumping Spieth, who, a month later, would claim his third major at the British Open.

HOW YOU CAN HIT IT:

Spieth’s winning blast from the greenside bunker on the 18th at TPC River Highlands did what all perfectly struck sand shots do: It flew high, checked once, then released to the hole. To make yours do likewise, use a longer backswing and try to “slap” the clubhead into the sand just behind the ball. I said “slap,” not “smack”— stay smooth. For extra shot height, add a bit of recoil; drop the clubhead into the sand then immediately pull it back. Dig your toes in for support, and stand far enough away to feel like you’re “reaching” for the ball. Give your arms the room they need to do their thing. — Top 100 Teacher Scott Munroe

THE OTHER GREATEST SHOTS: 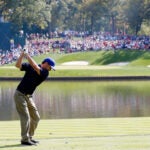 You may also like Shots of the year (and how to hit them!): Justin Thomas’s 3-wood blast puts him into the record books