CHARLOTTE — I couldn’t muster 99 observations on Day 1 of the 99th PGA Championship, but I did scribble down seven. To the notebook!

1. A few months ago Grayson Murray was looking like the antihero that golf desperately needs. With his reckless tweets and hotheaded antics between the ropes, Murray seemed happy to play the heel, even as the negative attention threatened to overshadow his considerable talent. But the 23-year-old rookie has been enjoying a belated growth spurt, which has coincided with a much lower profile on Twitter. Last month Murray won the Barbasol Championship, capping an impressive year-and-a-half rise from conditional status on the Web.com tour.

Murray’s victory punched his ticket to Quail Hollow, which is about 150 miles west of his hometown of Raleigh. Murray had never played the course until this week but he looked exceedingly comfortable during an opening 68 in front of dozens of supporters. “It’s good motivation for me,” he said of all the friends and family in the gallery. His reflective interview session featured no controversial proclamations and nary a bit of ego. “I played about as good as I could,” Murray said. “All the world-class players are here, so I’ll have to play my A+ game probably right now to win where some guys may be able to play B+ and win. Hopefully I’ll be at that stage of my career soon.”

Quail Hollow is a bomber’s paradise and Murray is currently 12th on Tour in driving distance (308.0 yards), but he credits his mid-season surge to getting more rest and working with a new short-game coach, former SMU coach Josh Gregory. If Murray can keep his head on straight he figures to be a regular presence on the leaderboard over the next three days, and beyond. 2. If golf ever dies out completely on this planet, the 1:15 p.m. starting time from the first round of the 99th PGA Championship will surely be to blame. Billy Horschel, S.W. Kim and Matthew Fitzpatrick somehow combined to make zero birdies against 16 bogies and a double. The PGA of America did not offer their gallery a refund, but should have.

3. Quail Hollow has always been a favorite stop on the PGA Tour schedule amongst the players, and many have a warm relationship with tournament patriarch Jonny Harris. So throughout the practice rounds there were a lot of polite, carefully-worded answers when the competitors were asked for their thoughts on the many tweaks to the course. Now that the gun has gone off, their feelings are coming out. The revamped par-3 4th — with a brick-hard, severely undulating green — was playing “dicey” according to Tony Finau and “a little absurd” per Murray. Walking to the scoring area following a 77, Will McGirt muttered to himself a candid assessment: “They f—ing ruined the golf course. They f—ing ruined the golf course. They fu…” 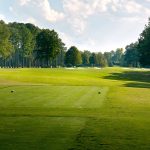 4. On a steamy day in Charlotte the best place to watch golf was deep within the air-conditioned comfort of the locker room, where Butch Harmon and Sean Foley were holding court in front of a TV, cutting up. Harmon does strong work as an analyst for Sky Sports but he would own the medium if he could cut loose on-air with the bawdy, profane, hilarious commentary he offered behind closed doors.

5. John Daly, the beloved ’91 PGA champ, was having a grand old time when he arrived on the tee at the par-3 17th at one under par, thick in the hunt for the Wanamaker Trophy. Diet Pepsi and Marlboro in hand, J.D. yukked it up with a marshal as his group waited for the green to clear. (“Willie, you going to outlive us all, baby!”) Then came a flared tee shot that led to a bogey followed by a flared approach shot at 18 that led to a nasty lie in the rough right of the green. From there, Daly required five shots (two chips, three putts) to hole out. Triple. Donezo.

6. The latest forecast shows a 50% chance of thunderstorms in Charlotte on Friday afternoon, and that may be a good thing. Quail Hollow has tried hard to replicate the playing conditions of Augusta National but the greens are already very close to the edge. “These greens are the fastest greens I’ve ever played,” said Brooks Koepka following his opening 68. “And the things is, they are only going to get faster and firmer.” After a year of rain-softened major championship setups, a fiery setup that pushes players to the breaking point is an intoxicating thought. But it’s a very slippery slope on the way to getting Shinnecock’d. “You never really quite felt like the ball was ever going to stop,” said Koepka, which should sound an alarm with the man in charge of the setup, Kerry Haigh.

7. Is it too soon to say Phil Mickelson has made a colossal mistake in parting ways with his career-long bagman, Jim (Bones) Mackay? At his first major championship with brother Tim on the bag, last month’s British Open, Mickelson shot a birdieless 73 and then a 77 to miss the cut. On Thursday at the PGA Championship, Phil looked utterly lost, blowing short putts, leaving his ball in a bunker and with the longer clubs visiting parts of Quail Hollow that are rarely explored. His woeful 79, his worst score at this event in 25 appearances, left him in a distant 131st place. Worse than his ragged play was his hangdog countenance — Mickelson seemed to have little fight. On Thursday evening I texted Bones (now a Golf Channel analyst) for his thoughts on his former boss’s play. He is always plugged in but this time did not respond. The silence spoke volumes.