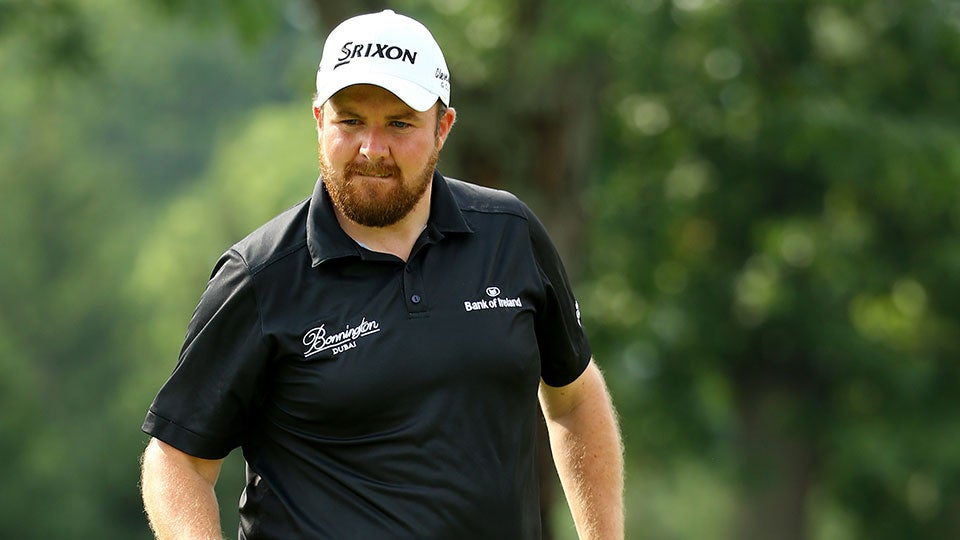 Shane Lowry carded four birdies in his final round to win the WGC-Bridgestone.
Getty Images

AKRON, Ohio (AP) — With no mistakes and two great escapes from the trees, Shane Lowry of Ireland introduced himself on a world stage Sunday by winning the Bridgestone Invitational.

He locked up victory in this World Golf Championship with a shot through the trees from left of the 18th fairway that descended over a bunker and settled just over 10 feet away for one final birdie and a 4-under 66.

“I was trying to get it to the front right of the green, but I pulled it a little bit,” Lowry said. “Obviously, it went through the tree, and the rest is history. I couldn’t believe I was seeing the ball coming down from there, coming down on the green.”

He won by two shots over Bubba Watson, who also shot 66.

Lowry won the Irish Open as an amateur in 2009, and he picked up his first European Tour victory in 2012 in Portugal.

In a final round at Firestone against a trio of major champions, Lowry produced a flawless card of no bogeys and plenty of emotional fist pumps to celebrate the biggest win of his career. He is the first non-PGA Tour member to win a WGC since Martin Kaymer at the 2011 HSBC Champions.

“I can’t believe it,” Lowry said. “I’ve played well most of the year, but these last four days are very special.”

Shane Lowry, that shot is supposed to be impossible. #QuickHits http://t.co/QUc5o7GQv3

Jim Furyk and Justin Rose, who shared the 54-hole lead, couldn’t keep up. Both closed with a 72 to tie for third, four shots behind.

Lowry had a one-shot lead when Furyk made his second bogey on the front nine, but the 28-year-old Irishman appeared to be in trouble with a wild hook off the 10th tee. Instead, he powered a wedge as high as he could, over a tree and listened for the gallery’s roar to hear the results. It plopped down and rolled to within tap-in range for a birdie that gave him control, and he never let up.

Just as important as his birdies were two pars on the back nine when he was trying to steady his nerves.

Lowry found a deep bunker left of the 14th fairway, came up short of the green and faced an 18-foot par putt that he buried to stay two shots ahead. Watson was up to his old theatrics with a shot out of the trees to 6 feet for birdie on the 17th to get within one shot. Lowry, playing two groups behind him, pulled his approach on the 17th and faced a tough chip from behind the green and he could only get within 6 feet. He holed that for another big par to keep his cushion.

“I was just trying to make two pars coming in after I saw Bubba make his birdie on 17,” Lowry said. “The up-and-down on 17 was probably the biggest up-and-down of the week considering the circumstances.”

The finish was a bonus and meant he could celebrate early, for it gave Lowry a three-shot margin over Furyk and Rose, the only players still on the course. Graeme McDowell, his close friend, waited around to congratulate him outside the scoring area.

Lowry had qualified eight previous times for the WGCs, and he famously took out Rory McIlroy in the first round of the Match Play in 2013. Furyk played with him Saturday and liked what he saw.

“What I had been told a couple years ago was that he had a beautiful short game, kind of a scrappy player,” Furyk said Saturday. “I don’t think that did it justice. I thought he hit the ball pretty well. I liked his game.”

Lowry finished at 11-under 269 and earned $1.57 million, along with a PGA Tour card for the next three years. He had been a special temporary member.

Watson was stunned that two wedges down the stretch bounced so hard on the greens and took away reasonable birdie chances – one on the par-5 16th and on the closing hole after a drive that rolled out nearly 380 yards.

“I nipped it, took paint off the ball and cut it with a 63-degree lob wedge and it just bounced,” Watson said. “Now knowing that if I had hit the tree, it spins more on 18. That’s what I should have done. Tell Lowry that was unbelievable.”

Masters and U.S. Open champion Jordan Spieth closed with a 66 and tied for 10th, his fifth straight top 10 during a stretch in which he has won four times.