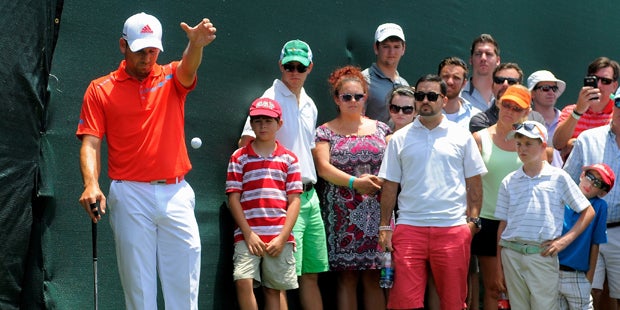 AUGUSTA, Ga. — Another apparent Rules quandary had the golf world befuddled on Friday at the Masters, but it was for naught.

Sergio Garcia grabbed a brief Masters lead on the back nine on Friday, but his bogey on the par-4 10th was later changed to a triple-bogey 7, which changed his overall score from three under to one under.

But no one knew what to believe.

The Augusta Chronicle first tweeted, “We’re told there will be an announcement about a possible penalty Sergio took at No. 10. Developing.”

The change to Garcia’s score came shortly after he parred the 11th hole. His score was changed on Masters.com and on the press center leaderboards, but no announcement was made. The Shot Tracker on Masters.com erased Garcia’s 10th hole score for nearly an hour.

The confusion stemmed from Garcia’s tee shot. He pulled his initial tee ball hard left, then followed that with a provisional. But he when he strolled off the tee box, he discovered that his first ball had ricocheted off a tree and into the middle of the fairway, about 200 yards off the tee. He missed the green right with his fairway-wood approach shot, chipped on and two-putted for a bogey.

An announcement was made in the media center at 2:28 p.m. that clarified the scoring error, saying Garcia made a 5.

I was on 10 tee. Serge tugged his first into woods then pured his provo. His first ball hit tree and kicked into f’way. Played that. Made 5.

Garcia is two under after 14 holes Friday. Check out live scores here.