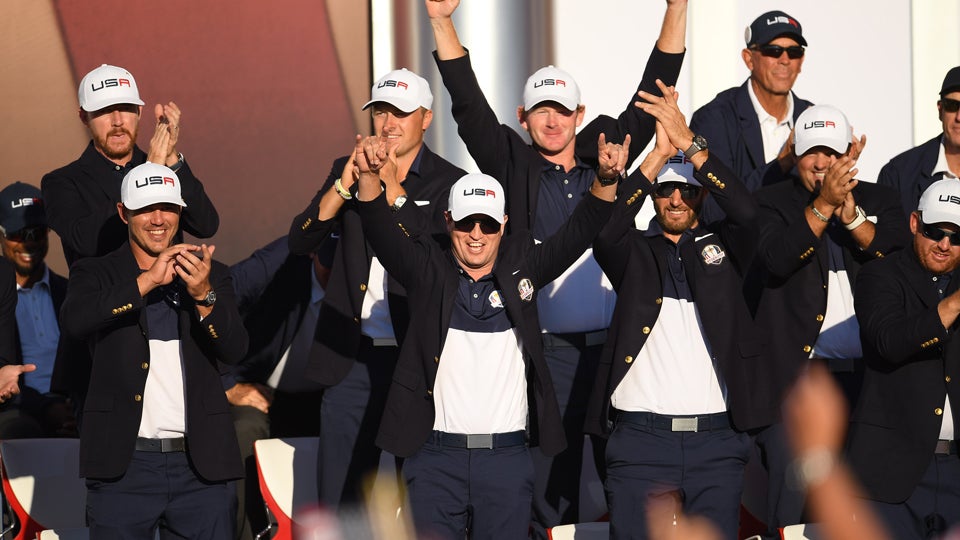 Maybe he was wrong; maybe he was right. Maybe it was just inspirational fodder, but Love’s team was definitely the best team assembled at Hazeltine this week. They were the deeper roster, and that paid off Sunday, to the tune of the biggest American victory in 25 years.

To say the skill level of the American team was substantially greater, from top to bottom, than their European opponents would be shortsighted, but it was no secret the Europeans entered the event as underdogs. They arrived in Minnesota with a team half-green, six rookies and six veterans, and only a smattering of PGA Tour members in the group. Then, as top-heavy underdogs in a 3-point deficit through four sessions of play, Darren Clarke’s hand was forced.

“We knew they were going to load the boat,” Love said.

Clarke did “load the boat,” with the likes of Rory McIlroy, Henrik Stenson, Justin Rose and Sergio Garcia sprinkled throughout the first six matches of the day. He wanted early victories, points on the board, and to force pressure upon the late matches. Love could have done the same, but he didn’t have to. In using Patrick Reed, Jordan Spieth and Phil Mickelson, Love tossed out a few of his big guns to fend off the European ringers. It was a defense of sorts, and it held its own, earning 2.5 points out of a possible six.

When Clarke unleashed his bullets early, Love had more in the chamber, in the form of Dustin Johnson, Brooks Koepka and Brandt Snedeker, ranked 2nd, 22nd and 23rd in the world. Playing the 8th, 9th, and 10th matches of the day, Snedeker, Johnson and Koepka each led at the turn, and suffocated any budding hope for the Europeans in the latter half of matches. Koepka, playing the 10th match of the day, closed out Danny Willett 5 and 4 long before the sixth match even finished on 18.

Koepka’s drubbing, the kind that starts late and ends early, was the type of result that keeps the momentum narrative from ever existing. It helped maintain a lead when the Americans were fending off prospects of Medinah 2.0 and helped them win the singles session 7.5-4.5. That American depth is the reason they are considered favorites at most Ryder Cups, past and present. Again, this year was no different, with 10 of the top 23 players in the world on the squad. Joined by nos. 28 and 31, no pieces seemed out of place. No wild cards were picked on their previous (and irrelevant performances) instead of their recent form. Each American member scored a point for the first time in more than 40 years.

Were they the best golf team ever assembled? We’ll never know, but the selection process proved to everyone just how deep this team could be. With more Top 30 players than he knew what to do with, Love chose the best American available, and sat down the no. 7 player in the World, Bubba Watson.

That selection was Ryan Moore, one of the hottest golfers on the planet, who had won five times on the PGA Tour and essentially every important amateur event in America. Sunday night, Snedeker offered that the American team was only as good as Moore, their 12th player, and he was probably right. It was Moore who clinched the Ryder Cup.