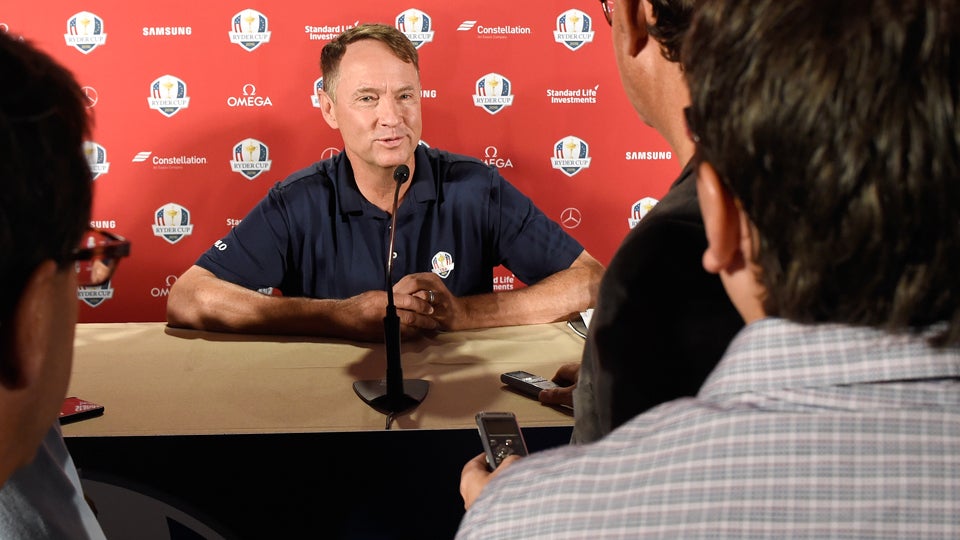 Davis Love III named three of his Ryder Cup captain's picks on Monday at Hazeltine, and all were familiar faces.
Getty Images

We waited 21 months for this?!

In the first big test of the Task Force Era, U.S. captain Davis Love went straight chalk with his picks, selecting Rickie Fowler, J.B. Holmes and Matt Kuchar. Love will add the 12th and final man to his team on Sept. 25, at the conclusion of the Tour Championship. Expect that pick to be safe and defensible, too. Fowler, Holmes and Kuchar are Ryder Cup veterans who have all played well this year. They have “intangibles,” to use a word Love has trotted out frequently in recent weeks. As players they have a decent chance to help the U.S. win the Ryder Cup for only the second time this century. But they fail badly as symbols.

After the Americans’ finger-pointing, back-stabbing implosion at Gleneagles two years ago, the hastily-assembled task force was supposed to herald a new era. It met for the first time in December 2014, a gathering of three generations of heavyweights who were to bring fresh thinking and new perspectives to try to solve two decades of failure. Ever since, Love has talked extensively about increased continuity and communication among the team leadership, a greater emphasis on analytics and more of a buy-in among his top players. Love’s picks represented the first referendum on this fresh new approach and yet he went with the most boring choices. Love could have taken a flier on a cocky gunslinger unscarred by previous Ryder Cup failures; unlike his three picks, Daniel Berger has actually won a PGA Tour event this year. Love could have put his trust in one of the hottest players on Tour, Ryan Moore. He could have gone for a quirky mega-talent in Bryson DeChambeau, who won Sunday at the pressure-packed Web.com Tour Finals. Love could have rolled the dice on Kevin Na, one of the game’s most consistent players and an on-course presence so unorthodox it surely would flummox the Europeans. None of these would-be picks are foolproof but they are different. Any of these players could have been a disruptor, a break from the anodyne choices of Love’s predecessors. Instead, the American captain fell back on the insidious e-word.

“Experience is good, we know what to expect, we know how to handle it,” Love said from his press conference at Hazeltine Golf Club, in Chaska, Minn. “Like Rickie said [during the press conference], like Matt said, we’ve been there, we’re going to learn from our mistakes. You heard Phil [Mickelson] say it a bunch yesterday [at the BMW Championship], we have a plan we’ve been working on for a year and a half and that’s part of it. I think our experience is going to really help us.”

TOUR CONFIDENTIAL: What Are Expectations for Tiger’s Return?

Love, the 2012 Ryder Cup captain, was a founding member of the task force. Remember when Dick Cheney was put in charge of selecting a vice president for George W. Bush and he wound up recommending himself? Love being named this year’s captain by the task force felt a bit like that. Fowler is on the force, too, thanks to two previous appearances in the Cup, during which he went 0-3-5. His various breakthroughs in 2015 seemed to assure him a spot on this team but Fowler has regressed badly this year, as he was a non-factor at all four majors, missing two cuts. Still, at the Barclays — the final tournament where points were up for grab in the automatic qualifying process — Fowler was comfortably on the team playing the final nine holes but stumbled badly at the finish, falling out of the top eight in points.

In his last chance to audition for Love, he opened with a 75 at the BMW and played his way out of the Tour Championship. Yet in explaining his pick, Love said, “He’s really confident on the big stage, as we’ve seen in the Olympics.” In fact, Fowler finished 37th in Rio, in a field that only had about two dozen really good players. But as always he brought a lot of good energy to the event. Fowler is one of the most popular players on Tour among his colleagues, and he’s a regular in the Tuesday games at the major championships overseen by Mickelson, another task force member. Indeed, Fowler is the only American who would be excited to be paired with Bubba Watson, the highly idiosyncratic personality who is currently 7th in the World Ranking. Whether or not to burn his final pick on Watson is now Love’s thorniest decision. Bubba would bring a ton of firepower to a 7,700-yard course but he hasn’t had a top-10 finish on Tour since early March.

The strongest argument for taking Fowler is that his stats are good; he’s eighth on Tour in overall strokes gained. But Love chose to emphasize Rickie’s cult of personality: “He’s such a good teammate, he brings a lot of intangibles.” For all the players who get left off this year’s Ryder Cup team it will be hard not to feel the fix was in, and that Fowler was going to be picked no matter how he played this year.

Kuchar can also boast solid stats: 7th in overall strokes gained and 4-5-2 record in three previous Ryder Cups, respectable by American standards. Last month he produced one of the rounds of the year, a career-low 63 to nab the bronze medal. Yet in explaining the Kuchar pick, Love again chose to highlight affability: “I’ve been on a lot of teams with Matt, he’s got a great attitude for match play, he’s a great partner… he’s easy to pair.”

Holmes offers a series of vexing contradictions. His awesome driving are leavened by shaky numbers in his approach shots and putting. Starting at last month’s PGA Championship he missed three straight cuts, not exactly the rousing rally Love wanted. But earlier in the year Holmes was third at British Open and tied for fourth at Masters. Ultimately, the x-factor was probably Holmes’s macho performance in his only previous Cup, in 2008, when he went 2-0-1 to help lead the U.S. to victory.

There are a dozen Americans at the Tour Championship who are not yet on the Ryder Cup team, including Berger, Moore, and Na, all would-be rookies. Love is well-positioned to take a first-timer because his team already enjoys a massive advantage when it comes to experience: The European side will feature six rookies while the Americans have only one in Brooks Koepka, a well-traveled 26-year-old who has won tournaments on three continents. Of course, given his first three captain’s picks, it’s easy to imagine Love going with one of his cronies in Jim Furyk. The 46-year-old is the biggest loser in Ryder Cup history, with a record of 8-20-4, but that might not matter. You see, Furyk is also a member of the task force, which was supposed to transform the U.S. Ryder Cup effort but so far appears to be more about defending the status quo.