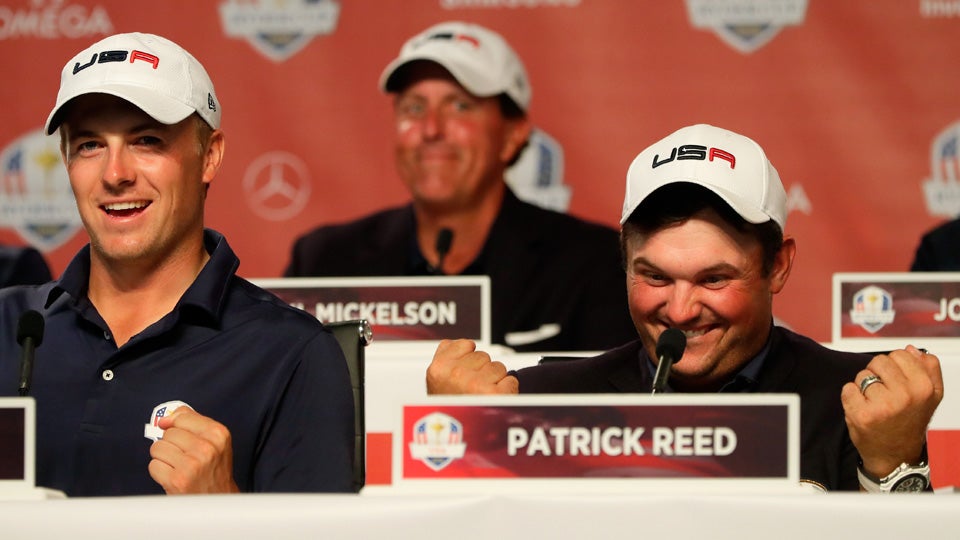 Patrick Reed and Jordan Spieth shared a laugh after their win.
Getty Images

The Ryder Cup, after all, is an exhibition. Players want to win, but they also want to have fun. (Oh, and the winning team gets to start drinking early to celebrate its victory.) Here are the eight funniest moments from Sunday night’s press conferences with the American and European teams.

1. “Fore! Fore left!” — Dustin Johnson, after popping a champagne bottle and watching the cork fly into the air, interrupting a Davis Love III answer to a question.

2. “Not with (America’s) pissy beer. No, I think they will be all right.” — Rory McIlroy, when asked if drinking was the main reason for the rowdy crowds and if drinking rules should be changed for the event.

3. The Europeans were asked if the Americans have found the Ryder Cup recipe for success, which a reporter called the Europeans’ “secret sauce.”

McIlroy: “Come on, Poults.”
Ian Poulter: “I guess I’m taking this one.”
McIlroy: “What’s the recipe of that secret sauce?”
Poulter: I think I just looked at a Tweet right now, which —”
Sergio Garcia: “You weren’t checking Twitter (now), really!?” 4. “S—. Being honest. Sorry, would you like me to elaborate? Really s—.” — Masters champ Danny Willett, when asked how he would describe his first Ryder Cup experience, which started with controversy regarding a piece his brother wrote and ended with Willett finishing 0-3-0 and the Euros losing.

5. “Well, when I try to dunk a basketball, I try to jump pretty high. I can touch the net. My arms are pretty long.” — Phil Mickelson, when asked of other examples of when he jumps *high* in the air, like he did after sinking his birdie putt on 18 on Sunday and when he won the Masters.

6. “The pressure started when some dumbass opened his mouth two years ago in the media center.” — Mickelson, referring to his press conference after the 2014 Ryder Cup at Gleneagles in which he was critical of captain Tom Watson, when asked where the pressure to win came from this year.

7. “Why are you asking me a question? Are you sure it’s not for Tiger?” — Dustin Johnson, after he wasn’t asked a question the entire press conference until the end.

8. “And I have Tiger’s cell phone number now. Yes! I’m going to text you all the time!” — Bubba Watson