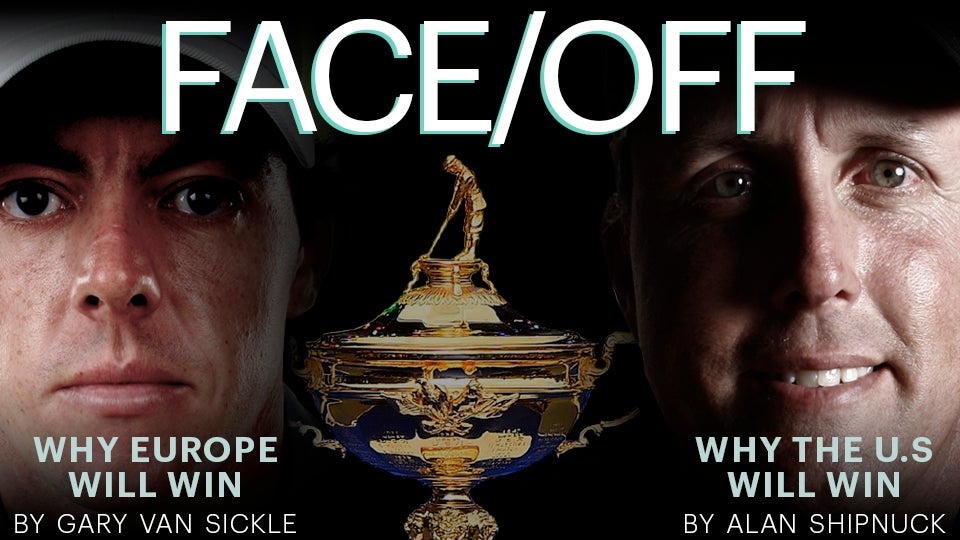 Sports Illustrated’s Alan Shipnuck and Gary Van Sickle make opposing cases for who will win the Ryder Cup at Hazeltine National on Sunday: The Americans or Europeans.

Why the U.S. Will Win the Ryder Cup

I have become so accustomed to picking Europe to win the Ryder Cup I thought I would try to convince you, the reader, and me, the skeptic, that the U.S. can actually get it done this time. For starters, the law of averages is on the Americans’ side — having lost 8 of the last 10 Ryder Cup, the Yanks are overdue for a few breaks to go their way. The Ryder Cup is a three-day experiment in momentum, and one shot, one putt, one well-timed fist-pump can have a cascading effect on the results. For the better part of two decades, Europe has managed to make exactly the right play at precisely the right time. That can’t go on forever. Right? Okay, it’s not the strongest argument, but I do believe it has merit.

The U.S. also has a significant advantage because two stalwarts won’t be playing: Ian Poulter and Jim Furyk. Poults has been the heart and soul of the European side for the last decade, but injuries have turned him into a glorified chauffeur this time around. That’s a big loss for a team that doesn’t have a dominant personality. For the U.S., Furyk not making the team is a massive case of addition by subtraction. His 10-20-4 record has been a proverbial anvil around the ankle of numerous American teams. Talent is more important than experience but having six Ryder rookies is a big red flag for Europe. No event in golf has a pucker factor that’s anywhere near the Cup, and playing in front of a rabidly partisan Midwestern crowd will be an added challenge for the callow Euros. You gotta figure (at least) a couple of the rooks will be in over their head. The U.S. has only two rookies, one being well-traveled Brooks Koepka, who has won tournaments on three continents, and the other in Ryan Moore, who at 34 is older than two-thirds of the European team.

An underrated factor for the U.S. is that Davis Love might in fact be a great captain. He certainly has more experience than his counterpart, Darren Clarke. As the boss man in 2012, Love pushed pretty much all the right buttons in leading his team to a 10-6 lead after two days of team play. Yes, the Americans threw up all over themselves in singles, but at that point there’s not much a captain can do. Put it this way: if Justin Rose doesn’t rattle in a big-breaking 40-footer on the 17th hole of his singles match against Phil Mickelson, Love would very likely have been only the second winning American captain this century.

There’s also this: the U.S. has Tiger Woods in its team room. When it comes to breaking down a course and plotting the most efficient way around, Woods is the greatest tactician this side of Jack Nicklaus. No one has ever read greens better. And if Tiger tells the likes of Patrick Reed what shot to hit, you better believe Reed is going to be fired up to execute it for his hero. You think Thomas Bjorn — or any of the other European in a leadership position — has anything close to that kind of galvanizing presence?

As much as I’ve enjoyed making fun of the Task Force, it’s very existence denotes a new holistic approach to ending two decades of futility. The American side has never had better communication between the Ryder Cup leadership and the players, or more of a total buy-in from everyone involved. In the end, a bureaucratic committee is not going to be the reason the U.S. wins, but this more organized, more coherent approach has to pay dividends. With two very evenly matched teams this Ryder Cup should be hard-fought and closely contested. For all the reasons outlined here, the Americans will squeak out their first win since 2008.

Why Europe Will Win the Ryder Cup

The Europeans will win the Ryder Cup because they always do. Can you say “dynasty?” That’s what we have here.

American sports haven’t had a long-running dominant force like this since, oh, Tiger Woods. Team USA has won one Ryder Cup in the 21st century and only two in the last 21 years.

The Euros aren’t afraid to lose another Ryder Cup, like the hard-pressed Americans are, because most of them don’t remember what losing a Ryder Cup is like.

Not to go full-bore Dr. Phil here, but the joy of winning trumps the fear of losing in the performance department and, yes, I regret using the word “trumps” in this sentence. Conscious thought can sabotage play in a white-knuckle event like the Ryder Cup, but the free-wheeling Euros are enjoying the party too much to white-knuckle anything except a post-round beverage.

If that’s too esoteric for you, let’s look at the actual teams. The best players in the world in July and August were Sweden’s Henrik Stenson and England’s Justin Rose. The former won the British Open in stunning fashion, shooting a closing 63. The latter won the Olympic gold medal against a small and admittedly weak field, but still, he played some outstanding golf.

Let’s toss Rory McIlroy in the mix. He once looked like the true long-term successor to Tiger as the world’s No. 1 player, and while he got side-tracked, he recently bounced back to get his first PGA Tour victory of the season. More importantly, he started to look like the Rory we’re familiar with, the one who won four major championships — three of them pretty easily.

That’s a fearsome foursome at the top of the European lineup. How do the Americans stack up? Dustin Johnson has emerged as America’s best player this year and he’s a force. You’d categorically say he’s the one guy you wouldn’t want to be matched up against, but his putting can be spotty. Since putting is such a big part of match play, that takes the edge off his intimidation factor.

Spieth hasn’t been on his game all year. He kept saying during the FedEx Cup events that he was close, but he wasn’t a factor in the year’s last three majors or the FedEx Cup’s first three events. America’s next best player is, uh, well, it’s hard to tell.

Patrick Reed had a nice late summer surge and he’s already a Ryder Cup villain to Euros for shushing the crowd after draining a putt at Gleneagles two years ago. Rickie Fowler had a lackluster year and had to be a captain’s pick.

Phil Mickelson had another near-miss in a major, while Matt Kuchar didn’t win but had three thirds plus an Olympic bronze. Brandt Snedeker won a tournament back in January. Jimmy Walker ended a quiet spell by winning the PGA Championship, so that’s a plus.

America’s top four, whoever they are, don’t appear to stack up to Europe’s top four, assuming everyone is playing with their A games. Of course, everyone doesn’t play their best in the Ryder Cup, but the Euros are much better at accomplishing that.

Behind their Fab Four, the Euros have warhorses Sergio Garcia and Lee Westwood, who have been permanent thorns in the Americans’ sides, plus Germany’s Martin Kaymer. Westwood quietly had a pretty good year. Remember, he was in the final pairing at Oakmont with Dustin Johnson in the U.S. Open. Kaymer has won two majors, been ranked No. 1 in the world and sank the clinching putt to cap Europe’s stunning rally at Medinah in 2012.

It’s true that Europe has six rookies. Willett hardly counts, because if you’ve won a Masters, a Ryder Cup shouldn’t awe you. Among the others, Matthew Fitzpatrick stands out. He is a rising young star overseas, sort of Europe’s version of Spieth. He won a U.S. Amateur a few years ago and qualified for the Cup on points.

Andy Sullivan’s game cooled off this summer but he won three times last year. There’s also Rafa Cabrera-Bello, a steady Spaniard; Chris Wood, who won the BMW PGA, a big-deal event; and Thomas Pieters, a Belgian who shot blistering 62 in Denmark to win an event and impress captain Darren Clarke enough to earn a surprise captain’s pick over Russell Knox.

The players on both sides are well-accomplished, and you can make a case for either team. And there’s potential trouble for the Euros in that Stenson is playing with a slight tear in his knee and Rose hasn’t been 100 percent physically most of the summer.

There is no home course advantage because the Americans aren’t any more familiar with Hazeltine National than the Europeans. It last hosted the 2009 PGA Championship won by Y.E. Yang and it’s a long, challenging ball-striker’s type of course that probably suits the Europeans, who have fairways-and-greens guys like Willett and Stenson and Rose and Westwood, better than the Americans, who have bomb-and-gougers like Johnson and Mickelson and Holmes. Spieth hasn’t excelled at hitting fairways this season, either.

Twist the numbers any way you like. The team that makes putts is the team that wins the Ryder Cup. Who putts better under pressure? Lately, it’s Europe. There is no reason to think they won’t do it again in Minnesota. After all, that’s what dynasties do.