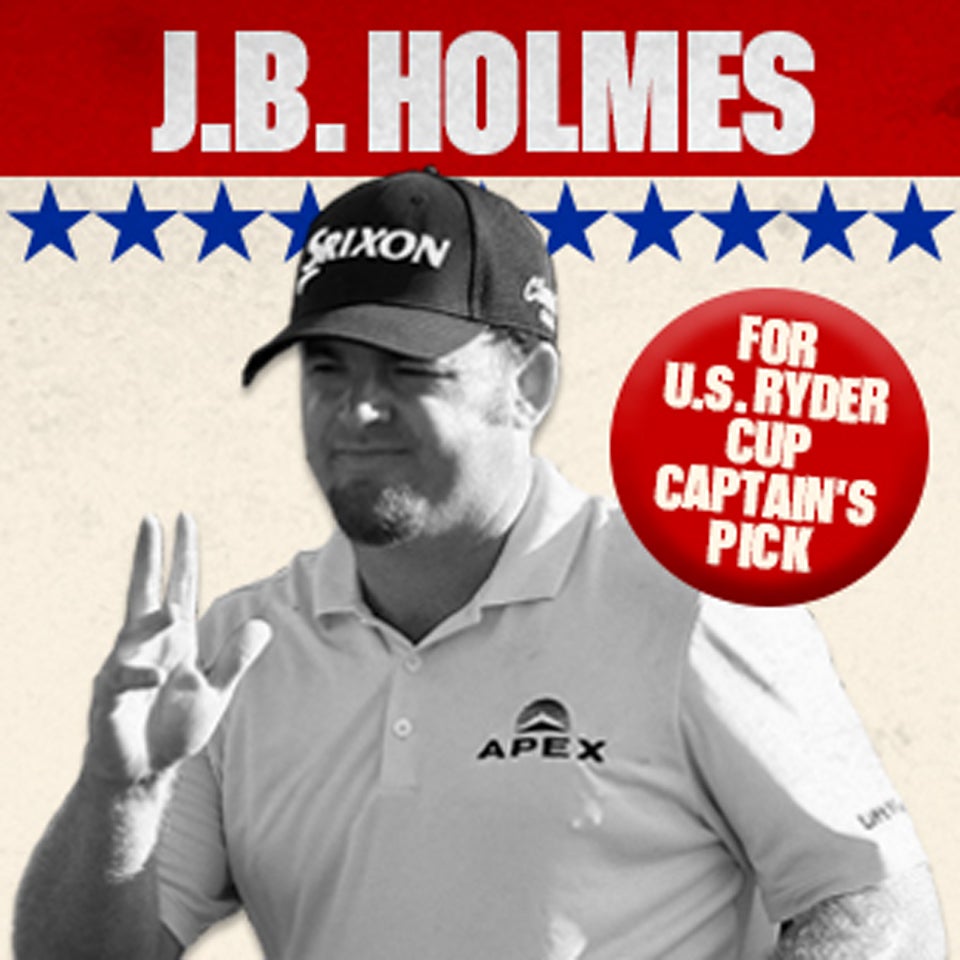 U.S. Ryder Cup captain Davis Love III has a daunting job ahead of him: filling the four spots on his squad reserved for wildcard picks. Who’s on DLIII’s short list? Presumably he already has his favorites — and we have ours. Each day in the run-up to Sept. 12, when Love will announce three of his picks (he won’t name his final pick until Sept. 26, the Monday after the Tour Championship), a GOLF.com staffer will make the case for a player who deserves the nod, beginning with long bomber J.B. Holmes. Who do you think belongs on the team? Let us know here.

The Barclays has come and gone, and J.B. Holmes didn’t quite do enough, his 41st-place finish left him 10th on the final Ryder Cup points list, between the flashier Bubba Watson (No. 9) and Rickie Fowler (11).

“That’s what I keep telling everybody!” Holmes says. “I’ve always enjoyed those situations and played well when I’ve had the opportunity.”

He would have needed another captain’s pick to play for Corey Pavin in 2010. “He hadn’t called me all year, but apparently the PGA had the wrong number,” Holmes says, “and he didn’t get ahold of me until like the BMW. I told him all that stuff [about playing on winning teams].”

VAN SICKLE: Is the European Ryder Cup Team an Underdog? No Way!

Holmes, now 34 and ranked 21st in the world, was mostly sidelined for the next few years, enduring brain surgery, tennis elbow and a broken ankle. But last year he was back, winning the Shell Houston Open only to finish 12th in the final Presidents Cup points standings. (Honestly, the guy has made a career out of barely missing these things.) Again, he needed a wildcard pick. Again, he didn’t get it, punching his ticket to Korea only when Jay Haas drafted him to replace injured Jim Furyk. Again, Holmes excelled, going 2-1-1 with partner Bubba Watson before losing his singles match to Hideki Matsuyama. And again, the U.S. won, but this time by the slimmest of margins: 15.5-14.5.

“It’s a neat thing,” the four-time Tour winner Holmes says of his success, “but obviously I’ve had good players around me, good teams.”

“That’s a long hitter’s course,” Holmes says. “It could have some tall rough. At that time of year it could be cold, so distance is an advantage.”

If that’s the case, Love should go back to the Holmes-Watson pairing that worked so well in Korea. (Which will require him to pick both players.)

“We thought best-ball format was going to be our thing,” Holmes says, “but we liked the alternate-shot, as well. Swinging that hard you’re going to hit some shots in the rough, but we weren’t worried about that because each of us knew the other one has been there before.”

The U.S. loses Ryder Cups in part because it keeps trying to reinvent the wheel every two years. Captains don’t seem to know or care what has and hasn’t worked. Here’s something that works: J.B. Holmes. He is long, he grooves to the team vibe and he’s undefeated. As Crash Davis might say: Respect the streak. Because even Holmes can’t help a team he isn’t on.