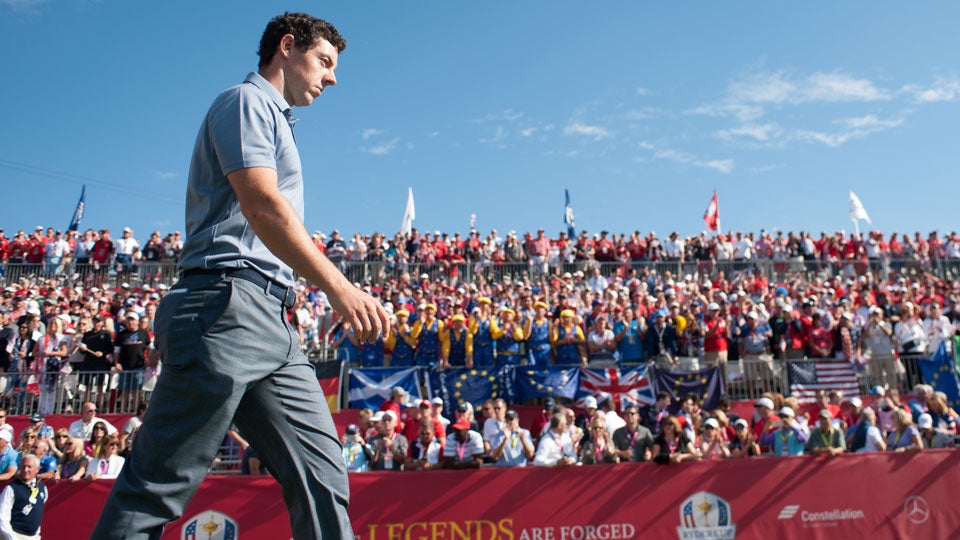 Thursday After a strong finish at the Korea Open and a win over Tiger Woods in an exhibition match at Mission Hills, Rory McIlroy continued down the comeback trail Thursday, taking a 2-shot lead after one round at the HSBC Champions.
Getty Images

CHASKA, Minn – It was the match of all matches, and images of finger-wags and fist-pumps will be replayed on loop long after they tear down the red metal bleachers here at Hazeltine.

Yes, it was personal. But not between the players on the course.

The opening match of the final session of this 41st Ryder Cup pitted Patrick Reed against Rory McIlroy, and it was everything golf fans could’ve wanted. Reed made an eagle and five birdies, and won it the 18th hole by canning a bloodless 6-footer as McIlroy lined up a putt that could’ve tied it and earned a half-point for both teams.

McIlroy had played four hours of angry golf, but his fury was not directed at Reed. Despite the histrionics, Rory’s real ire was aimed at the raucous Hazeltine fans, particularly those scattered chuckleheads who whooped and hollered as he stood over tee shots, lashed irons and stroked putts.

Let’s start with the 6th green, where Rory dropped a birdie, unleashed a maniacal scream and stalked away. Reed matched the putt, bowed to the crowd — mocking Rory’s similar gesture from Friday afternoon —  and wagged a finger at McIlroy, who had his back turned and never saw it. They birdied on top of each other again on 7, and Reed revved the crowd after his putt, and Rory reacted to his own by “shushing” fans in a nod to Reed’s famous move two years ago at Gleaneagles. On the par-3 8th, McIlroy dropped a third straight birdie, this time from more than 50 feet and Reed matched it yet again with a 20-footer, this time giving Rory a finger-wag in full view of the fans, straight at McIlroy’s mug.

In that moment, the fans around the green lost their collective mind. It felt like there were 11 matches on the course to determine the Ryder Cup, and this bout to decide something bigger. At stake, perhaps, was the identity of the baddest match-play golfer in the world.

But as the players walked off the green, they slapped each other on the back. Both desperately wanted to win, but there was a mutual respect. Maybe even friendship. Heck, on the 9th hole they gave each other 3-foot putts. (Later, McIlroy told Golf Channel, “We were congratulating each other after great shots. It was all played in the right spirit. No problems with Patrick Reed at all.”)

That’s when it became clear. Rory wasn’t angry at Reed. He was ticked at the rowdy crowds, which had been giving him, and his teammates, the business all week.

On Sunday, I didn’t hear anything as vulgar as some of the things TV cameras picked up on Saturday – no references to livestock or human anatomy or some sophomoric combination of the two —  but Rory still got an earful. A sampling:

On 11, after blowing a lag putt five feet past the hole: “Go away!”

On 12, while approaching the green: “Rory, I hope we don’t offend you!”

On 14, immediately after striking his approach shot: “Fore left!”

On 16, while preparing to lay up: “You better make something happen!”

As he prepared to hit his approach on 16, 1 down and needing a clutch shot, one fan finally crossed the line in a way that couldn’t be brushed aside. McIlroy had driven into the left rough, and laid up to the right side of the fairway. As he stood over a 50-yard pitch shot, one fan screamed, “Woo!” Rory backed off, Reed turned toward the sound and raised his arms in a gesture that said, “Come on, man.” Rory dug in again and hit the shot heavy, onto the green but about 25 feet short of the cup. A poor shot from that distance. Reed got up and down from the sand for birdie, McIlroy missed his putt, and Reed took a 2-up lead.

On 18, after Reed hit the final putt, McIlroy was boiling. He had hit a brilliant approach, but never got to take the putt after Reed drained the clincher. After shaking hands, McIlroy chucked his putter against a small Go Pro camera that was planted into the fringe of the green. Then he walked over and kicked it the camera over for good measure. I’m told that camera was recording, so look for a viral video coming to a website near you.

The match will take its rightful place in Ryder Cup lore. Amid all the first pumps and finger wags, I’ll always remember how Rory channeled his wrath for 18 holes of brilliant golf. He was angry before, during and after. You really couldn’t blame him.