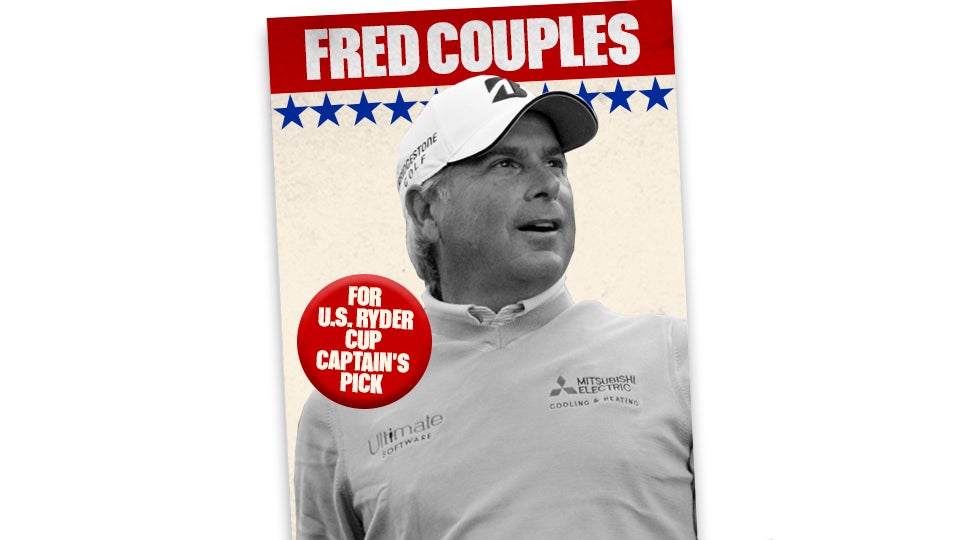 Fred Couples as a Ryder Cup captain's pick? It's not as crazy as you might think.
Kaitlin Santanna Graphic

U.S. Ryder Cup captain Davis Love III has a daunting job ahead of him: filling the four spots on his squad reserved for wildcard picks. Who’s on DLIII’s short list? Presumably he already has his favorites — and we have ours. Each day in the run-up to Sept. 12, when Love will announce three of his picks (he won’t name his final pick until Sept. 26, the Monday after the Tour Championship), a GOLF.com staffer will make the case for a player who deserves the nod. Up next, Fred Couples. (Seriously!) Who do you think belongs on the team? Let us know here.

The 12th man on a Ryder Cup team should be picked with no nod to science, which is why I am suggesting to my close personal friend Davis M. Love III that he pick his close personal friend Fred Couples with his final selection. Yes, it’s true that Fred has barely played this year. Allegedly, it’s his back. I say it’s boredom with stroke-play events that is keeping him at home. It’s true that Fred is 56 with a balky putting stroke on the short ones. I say he still hits it as flush as anybody and that he’s not going to have to make too many meaningful short putts, if you use him right. You say, “Fred? Really?” I say, yes, really. He’s tanned, rested and ready. First of all, you don’t have to play him that much, which means your other players, more ready for prime-time, get more chances to play. I’m thinking alternate-shot with Brooks Koepka on Friday. If they win, bring them back out on Saturday. If they tie or lose, give Fred the day off and let him work his Presidents Cup magic on Saturday, in the team room and on the first tee. (Message by Fred: Don’t stress it — it’s just golf; you’re good at golf, right?) On Sunday, send him off second or third. He will have a roughly 45-55 chance of getting a point or half a point. There’s no guarantee that — name your pick — is going to enjoy odds any better than that.

Then there are all the ephemeral things he brings to the team. He loosens up Tiger, who can be the most meaningful assistant captain in the history of assistant captaincy, if he feels comfortable, if he can dig deep and share and inspire. Fred gives Davis another trusted person to talk to. Fred can size up talent and personalities like a detective — he’s a keen observer of people (a gift he hides well through his practiced nonchalance). Also, he’s never going to be a Ryder Cup captain, not with Phil and Tiger and Furyk all waiting for their turns. (I could see Davis coming back for a third turn if this one goes well.) Fred deserves this send-off.

Fred Couples was on seven Presidents Cup team, as either a player or captain. The U.S. lost only once. If anybody understands how to take P.C. mojo and apply it to the U.S. Ryder Cup doldrums, it’s Fred.

He was a player on five Ryder Cup teams: two wins, two losses and a tie. He will help at Hazeltine in all sorts of ways, beyond his great ability to figure out how to use the TV remote. He’ll keep things cool. He’ll help your team, Davis, and he won’t hurt it, even if he finishes 0-2. Even if he goes 1-1-1, he helps. He will only help. Isn’t that what you want in your 12th man?