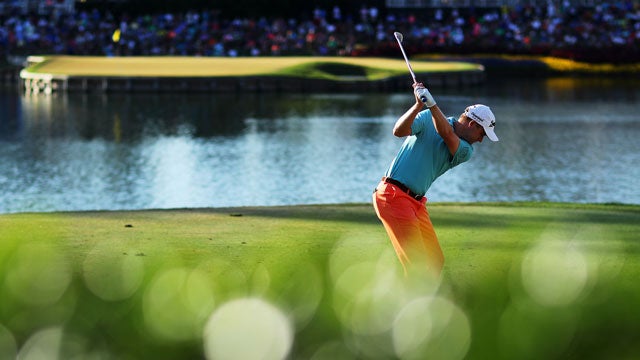 Russell Knox tees off on the eighth hole during the third round of the FedEx St. Jude Classic.
Sam Greenwood / Getty Images

GULLANE, Scotland (AP) — Russell Knox was playing the 12th hole in the pro-am at the Scottish Open when he checked his phone and saw he’d received a text from his wife.

It was the message Knox had been waiting for: He’ll be playing in the British Open for the first time.

The 30-year-old Scot was given a place in the field for golf’s oldest major tournament after top-ranked Rory McIlroy withdrew Wednesday because of a left ankle injury sustained while playing soccer with friends at the weekend.

“What Scot doesn’t want to play an Open, let alone an Open at St. Andrews? It’ll be a true thrill.”

Knox, who was born in Inverness in northern Scotland but is based in Florida and plays on the PGA Tour, has never played at the Old Course as a professional. He played one round there as an amateur, and went to watch one British Open at St. Andrews purely as a fan.

He said getting the call is a weight off his shoulders, sparing him an agonizing wait over the next week.

“Everyone is gutted for Rory. He is in the prime of his career and would have had a great chance to win there,” Knox said of the defending champion.

“I was thinking about it (the British Open). You always think, `First reserve, yeah you’ll probably get in,’ but sometimes you don’t … It’s nice to know now, so I can plan.”

Knox’s best memory of the Open at St. Andrews is Tiger Woods romping to a five-shot victory in 2005.