Rory on Tiger: It Looks Like a Long Road to Recovery 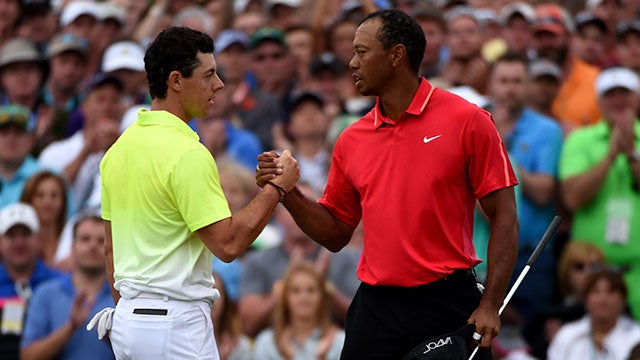 Rory McIlroy and Tiger Woods shake hands on the 18th green during the final round of the 2015 Masters at Augusta National Golf Club on April 12, 2015
Getty Images

Rory McIlroy believes Tiger Woods is in for a “long road to recovery” after golf’s biggest star underwent a second back procedure in two months.

“I think any time you touch your back it is tough,” McIlroy said. “It looks like it is a long road to recovery for him and I just hope he gets better, not just to play golf but just for everyday life and being able to do everyday things more than anything else.”

McIlroy is doing what Woods used to do in the off-season, competing and roaming around the top of leaderboards in European Tour events in far corners of the world. This week, McIlroy is tied for third entering the final round of the Turkish Airlines Open in Antalya, Turkey.

“That’s his third back surgery in just over a year and like someone once said, ‘The best way to avoid your fifth back surgery is not to do the first one.'” McIlroy said. “But it’s a procedure he needed. I just hope he gets better.”

In the release, Woods said it “was one of those things that had to be done” and that he was on bed rest following the procedure. The 14-time major champ famously has not won a major since 2008 and has not won on Tour since 2013.

“He is missed by the game of golf in general,” McIlroy said. “I am not sure the players miss being beaten by him every week. The game of golf, we were so lucky and so privileged to have him spearheading our sport for so long.”

The need for this procedure so quickly after his microdiscectomy in September is a red flag (and his former coach Hank Haney wonders if this is it for his old student), but Woods gave an air of confidence in his quotes, saying “I’ll be back, and I’ll be ready to compete.”