Rory McIlroy will have friend Harry Diamond as his caddie throughout the FedEx Cup Playoffs, McIlroy said during a media event on Tuesday at Yankee Stadium in the Bronx.

McIlroy, who split with longtime caddie J.P. Fitzgerald after the British Open, had Diamond, who was also the best man in his wedding, caddie for him at the WGC-Bridgestone Invitational and the PGA Championship. He finished T5 at the Bridgestone and was T22 at the PGA. 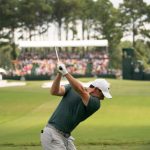 You may also like David Duval on Rory McIlroy: ‘I am watching his swing deteriorate’

After his final round at Quail Hollow, McIlroy said he was unsure when he would compete next, and who would be his caddie going forward, as he’s still bothered by a rib injury. But the defending FedEx Cup champion isn’t resting yet, as he’s in the field for this week’s Northern Trust, the first of four playoff events.

Rory McIlroy says Harry Diamond will caddie throughout playoffs. Wants to “spend some time” with possible future caddies before deciding.