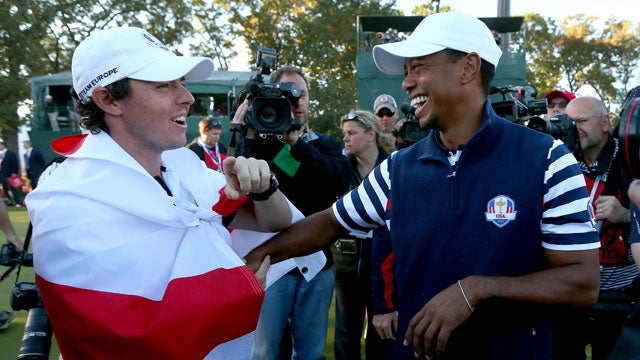 Rory McIlroy of Europe (L) and Tiger Woods of the USA greet each other on the 18th green after Europe defeated the USA 14.5 to 13.5 to retain the Ryder Cup during the Singles Matches for The 39th Ryder Cup at Medinah Country Club on September 30, 2012 in
Getty Images

Tiger Woods was announced as a Ryder Cup vice captain on Wednesday in a surprising move by Team USA captain Davis Love III.

The first and most obvious question: Does that mean we’ve seen Tiger’s last appearance as a player in the event? Is he accepting – even embracing – his transition to elder statesman of the Tour? Golf fans weren’t the only ones to raise an eyebrow at the news. When Rory McIlroy found out about the announcement after his first round at the DP World Tour Championship in Dubai, he was “visibly surprised,” according to a Belfast Telegraph report.

“I don’t know what to think about that, I really don’t,” McIlroy said. “It’s great that he wants to help the U.S. team in any way that he can, and if that’s not in a playing capacity, then as a vice captain. Just sort of makes me think what really his health is like and how he feels like he’s going to come back from that.”

This was lost in the flag-waving at Wednesday’s press conference with Love III saying how badly Woods wanted to be a player and a captain in 2016. But Woods turns 40 in December, has had multiple back surgeries and does not know when he will back to swinging a golf club – he had a follow-up back procedure a few weeks ago – much less when he’ll be able to compete in tournaments again. Even if Woods wants to qualify and make the team on merit, how realistic is that goal? Is Tiger worth more in the team room than on the course? “I think Jordan (Spieth) and Tiger have become quite close and if you look at the likes of Justin Thomas or Daniel Berger, some of the guys that are similar age to me or a little bit younger that grew up idolizing Tiger, to have someone like him to be a part of the team will be great for them,” McIlroy said.

Fellow European Ryder Cup stalwart Ian Poulter agrees. Woods’ main asset is his years of competing in the drama-packed event. But Woods’ experience is not going to magically tip the scales toward the United States.

“He’s bringing a lot of experience, and guys would respect what he’s done in the game of golf,” Poulter told the Telegraph. “Tiger’s Tiger. He creates a buzz whether he’s playing or not playing, so just his presence there would be a good thing for the team.”

And we know the United States squad needs all the help it can get. After losing eight of the last 10 events, they formed a widely-mocked Ryder Cup Task Force in order to grab momentum back from the Europeans. Even if Woods doesn’t compete, having a 14-time major champ in your team room isn’t a bad thing.

“I’d rather see him on the course at Hazeltine but if not, at least he’ll be there and it will be a good addition for them,” McIlroy said.