Rory McIlroy told Jack Nicklaus in a letter that he would not be playing in this year's Memorial tournament.
Getty Images/David Cannon

For a 26-year-old, Rory McIlroy sure is an old soul.

The world No. 1 penned a letter to Jack Nicklaus to inform the Golden Bear that he would not be competing in his tournament, the Memorial at Muirfield Village, according to Reuters.

The Memorial is two weeks before the U.S. Open at Chambers Bay, and McIlroy will defend his title at the BMW PGA Championship next week before heading to the Irish Open the following week. That will be five straight weeks of tournament golf, following the WGC-Cadillac Match Play, the Players and this week’s Wells Fargo Championship.

McIlroy reportedly ran into Nicklaus Monday at the Bears Club, at which point Nicklaus thanked him for the letter. 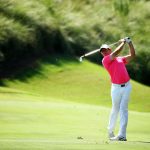 “The first thing he said to me was that he’d received my letter and I said to him I wanted to write rather than phone or just advise the Tour,” McIlroy told reporters Wednesday. “He seemed pretty taken back to get my letter and that made me feel good.”

Maybe the week off will give Rory a chance to swing by Chambers Bay. Early reports from players aren’t great, and USGA executive director Mike Davis suggested that a Chambers Bay victory would require plenty of studying ahead of time. Perhaps Rory got the memo.