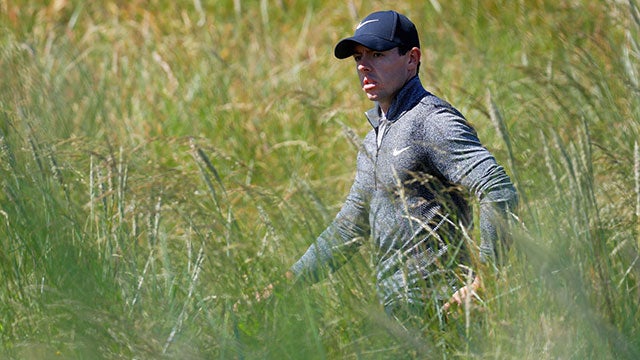 Rory McIlroy finished with a first-round 69, good enough for a T14 spot at the conclusion of his round.
Getty

In his pre-tournament press conference, Rory McIlroy created some backlash with his comments about golf in the Olympics, drug testing on the PGA Tour and his duties as a golfer to “grow the game.” After his opening round at the British Open, McIlroy was asked again about his comments and took a moment to expand on his earlier statements.

When asked if he was happy with everything said in his press conference, McIlroy replied, “Yeah, I think I would have elaborated a little bit on the grow-the-game comment. Obviously I feel like I do my bit to grow the game. It’s not as if I’m uninterested. I don’t want to force golf on anyone, but I feel like golf is a great vehicle to instill values in kids. I’m an ambassador for the PGA Junior League, I do some stuff for the First Tee in the States, and I feel like I’ve used my success in golf in a very positive way in the community. “Look, again, the next generation can play golf if they want or they don’t,” McIlroy continued. “It won’t make me any less happy. But if I can somehow make a positive change in the world by what I do on the golf course, so whether that means raise money for charity or give kids more of a chance in life growing up, I’ve been very fortunate to do what I’ve done in golf, and I feel like I’ve used that success in a positive way. So I have no regrets about where I stand on certain things, but I wish I maybe would have just elaborated a little bit more on what I said.”

After McIlroy’s press conference Tuesday, Golf Channel analyst Brandel Chamblee said he believed McIlroy would regret those words for the rest of his life.

“Look, it’s my opinion,” McIlroy said. “I think my opinion’s shared by a few people, but some people may think it’s wrong and that’s fine. But I’ve spent seven years trying to please everyone, and I figured out that I can’t really do that, so I may as well be true to myself.”

The world’s No. 4-ranked player opened his British Open at Troon with a two-under 69. At the end of his round, that mark was good enough for 14th place.