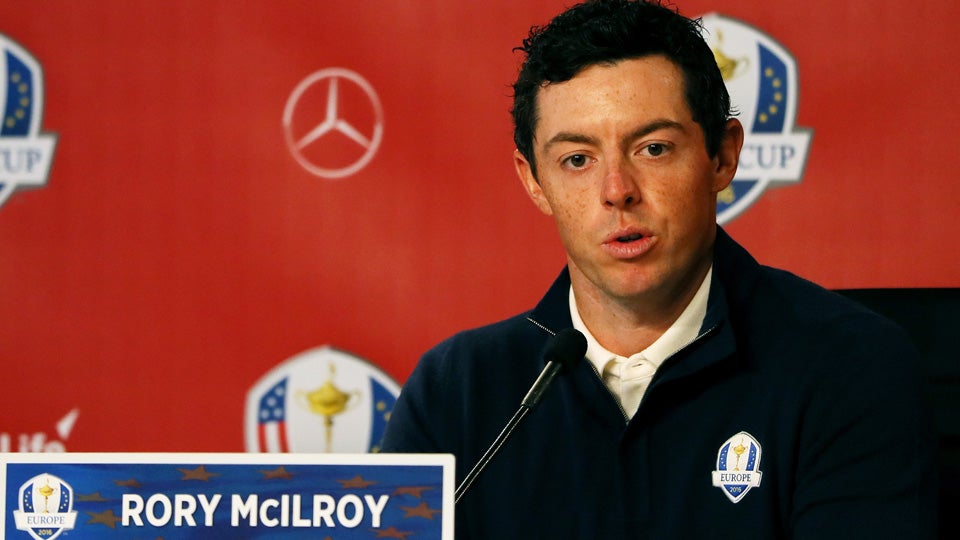 Rory McIlroy speaks to the media during his press conference on Tuesday at Hazeltine.
Getty Images

CHASKA, Minn. — On the day Rory McIlroy turned 10 years old, his father’s gift to him was a trip to the Valley Links at Royal Portrush. That’s when he met Darren Clarke for the first time.

“I was just in awe of him,” McIlroy said. “My 10th birthday wasn’t getting any better anyway, and all of a sudden I meet Darren Clarke.”

On Friday, just five days removed from winning the FedEx Cup and a cool $10 million bonus, the Europeans’ most dangerous man and rejuvenated leader (two wins in four weeks) will tee off playing under captain Clarke. Both are looking for yet another victory in the biennial event dominated by Europe over the last two decades.

“My relationship goes back a long way with Darren and it’s very special for me this week,” McIlroy said during his Tuesday press conference. “I think it’s special for both of us, that he is now a Ryder Cup captain and I’m a player under him.

“I always wanted to win for the captain, but probably even more so this year just because of Darren and the relationship that we have.”

Among the veterans, McIlroy and Martin Kaymer are Europe’s only players to never be a part of a losing Ryder Cup team. Both are 3-0 after being on winning teams in 2010, 2012 and 2014. (Twice during his presser McIlroy slyly mentioned that he’s yet to lose.) J.B. Holmes is the only undefeated American, as he’s played only on the winning 2008 squad.

But despite the lopsided record of late, the Europeans shouldn’t lack motivation. They are the away team, hearty underdogs, and have had to listen to endless U.S. Ryder Cup storylines about potential captain’s picks, the impact of Tiger Woods and more for the past month. Additionally, Johnny Miller recently said this might be the worst European team in years. (“At the end of the day, you don’t win Ryder Cups with your mouth,” Sergio Garcia said Tuesday.) McIlroy, who is 2-0-1 all-time in Ryder Cup singles play, referenced “the greatest (U.S.) team ever assembled” twice during his press conference, referring to Davis Love’s comments about this year’s squad, which he first took a jab at during the Tour Championship. He admitted that he likes to have fun with the Ryder Cup task force. But he also knows it won’t be easy for Europe to win for the ninth time in 11 Cups.

As for his captain, McIlroy said that initial meeting with Clarke 17 years ago still sticks with him.

“All those memories come sort of rushing back of the times that we’ve spent together from Portrush down to Portmarnock, where he held his foundation weekend every year,” he said. “Here we are, in the biggest stage of the game, and I’m able to play under him as a Ryder Cup captain — and I’m very much looking forward to that.”