The Distance Report’s most important issue, according to Rory McIlroy

LOS ANGELES — When Rory McIlroy was asked Wednesday for his thoughts on the Distance Report put out by the USGA/R&A, he took a deep breath. “How long have you got?”

When it’s McIlroy talking, members of the golf media have all the time in the world — especially when he’s breaking down a defining issue of golf’s modern era. The 30-year-old is sharp, thoughtful and honest, a combination that lends itself to compelling analysis.

McIlroy’s first takeaway, he said, was that the report was really only made to address problems created by the elite men’s game — “.1 percent of golfers out there,” he said. McIlroy finished last season second on Tour in driving distance. He’s the .1 percent of the .1 percent.

“So look, if they want to try to contain what we do as touring professionals, I’m all for that,” he added. It was a casual line, but with potentially significant implications — was this a suggestion of bifurcation from the No. 1 player in the world? Of rolling back equipment standards? He didn’t say, specifically. But McIlroy was clear that the report hits on one topic that’s far more important — and clear-cut: sustainability. 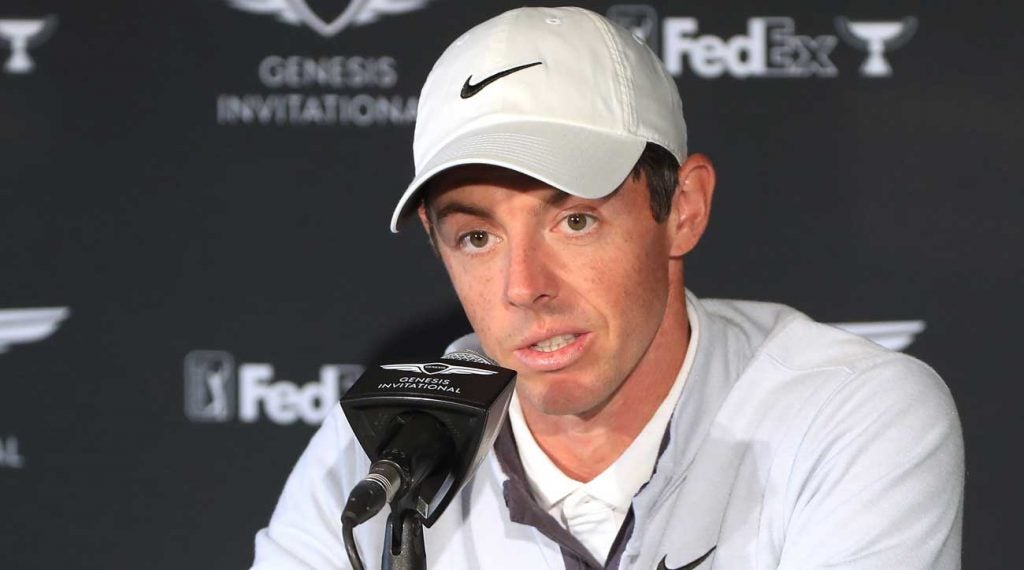 When it comes to the distance debate, Rory McIlroy is focused on golf's sustainability.
Getty Images

“The people that are giving the architects the money to build these golf courses have this grand ambition of maybe having a Tour event one day,” McIlroy said. “Building these golf courses on these massive pieces of land means having to use so much water, so much fertilizer, pesticides, all the stuff that we really shouldn’t be doing nowadays, especially in the climate we live in and everything that’s happening in our world.

“You look at what happened in Australia, you look at what happens in this state every August, September, October time with fires and global warming — I think golf has a responsibility to minimize its footprint as much as it possibly can. For me, I think the sustainability aspect of what they’re trying to do is very important and that’s the one thing I would definitely stand behind.”

News
How Tiger and Phil (yes, Phil!) could help the rulesmakers shape the distance debate

Among the report’s key findings was the idea that increased hitting distance has fueled bigger, longer footprints for golf courses, but the game’s longest hitters can still overwhelm those bigger courses. Between 1900 and 1930, the 90th percentile for longest courses was around 6,100 yards. This decade, that number is 7,200. With distance still on the rise, that trend is expected to continue.

There are signs of the distance creep even at ageless Riviera this week, where firm fairways mean extra roll and particularly short irons into greens. And there’s not much room left to expand. “There have been some holes that they’re able to extend, but for the most part the confines are what they are here,” Tiger Woods said a day earlier. “There’s really nowhere to go.”