Rory McIlroy and Paul Casey could not finish their match through 21 holes.
Getty Images

SAN FRANCISCO (AP) — Rory McIlroy advanced to the semifinals of the Match Play Championship in a match against Paul Casey that went 22 holes in two days.

Returning in the morning chill Sunday, McIlroy hit a beautiful lag from 60 feet that set up a birdie on the par-5 first hole. Casey hit a 3-wood onto the green, except that it went just over the back into a sticky lie in the rough.

His first chip didn’t reach the green. His next chip was short. He had McIlroy putt from just over 2 feet for the No. 1 player to advance. Casey became ill overnight and said it affected him only when looking down at his ball in the rough.

McIlroy advanced to play Jim Furyk, who reached his first semifinal with a 4-and-2 victory over Louis Oosthuizen Saturday.

On Saturday, Gary Woodland got up big early against John Senden and coasted to a 5-and-3 victory, fueled by memories of a bad loss last year that the powerful Kansan is determined to not let happen again. He will face Danny Willett of England, who beat his third straight countryman with a 4-and-3 win over Tommy Fleetwood.

The quarterfinals began late so that it could end in prime time on the East Coast, a move that backfired when McIlroy and Casey went overtime.

“I had a couple of opportunities to close it out and couldn’t quite convert,” McIlroy said Saturday. “Come back in the morning and try again.”

This for a spot in the semifinals … #MatchPlay pic.twitter.com/0CMQQIpShB

Casey said they weren’t sure they could even play the final hole, but they gave it a try. Casey blew his tee shot well to the right on the reachable 16th, leaving a flop shot to a tight pin that was impossible to get close. He was saved by McIlroy’s miss.

“I dodged a couple of bullets,” Casey said. “But I gave him one two. I’m glad we’re teeing off tomorrow. Standing on this green, I thought I was done for the day, done for the week. The beautiful thing is we hit the reset button.”

McIlroy never had a chance to get to the big fight in Las Vegas. It would have been close even if he had won his match quickly, as he did Saturday morning in a 6-and-5 victory over Hideki Matsuyama. It was going to be a race just to get in front of a TV in San Francisco to watch Manny Pacquiao and Floyd Mayweather Jr.

McIlroy must have felt the fatigue from his own bout. 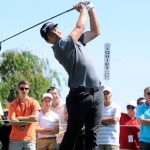 Furyk and Willett have played the fewest holes (84) in their five matches.

Woodland has had the easiest time.

He was 1 down to Jimmy Walker through 15 holes in his opening match Wednesday, and that was the last time Woodland has trailed this week. He got off to his best start yet against Senden by starting with five birdies in seven holes to go 5 up and the Australian couldn’t catch up.

“It’s nice to be up early. It’s nice have some par 5s early,” Woodland said. “There are a lot of long holes early, and that’s to my advantage when I’m driving it well.”

Woodland also is fueled by memories of last year when he was 3 up on Graeme McDowell with three holes to play and wound up losing in the opening round. Woodland brought a different attitude this year. 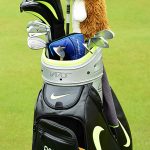 “I’m pedal to the metal every round up here, every hole,” he said. “Never giving anybody any hope is the key. And fortunately, I’ve done that.”

Next up is Willett, the 27-year-old from England who had to get through three of his countrymen to reach the semifinals in his Match Play debut. Willett beat Andy Sullivan to win his group Friday, and then had little trouble with Lee Westwood in the round of 16 on Saturday morning.

The last hurdle was Fleetwood, and while Willett never trailed, he was 1 up through 10 when he won three of the next four holes. The only downside for Willett was that he had a ticket to the fight in Las Vegas. That went to Westwood.

“If all would have gone terribly wrong today, I would have been going,” Willett said. “A shame to miss it. But for me, it’s obviously good being here.”

No one was helped by the new round-robin format than Furyk, the only semifinalist with a loss this week.

Furyk could only watch as Thongchai Jaidee, who had beaten him earlier in the week, had an 8-foot par putt in extra holes that would have knocked him out. Thongchai missed, Furyk advanced and he’s two matches away from a shot at his first World Golf Championship.