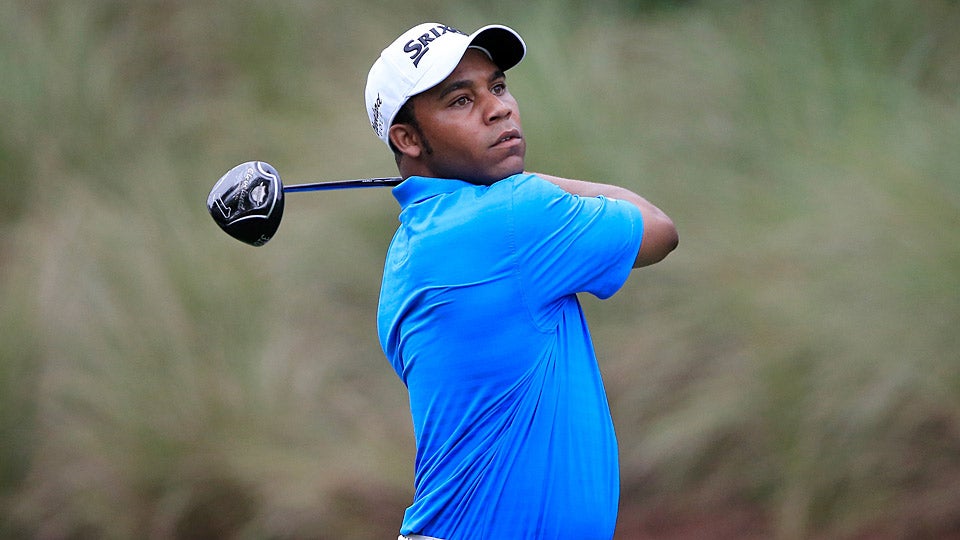 NAPA, Calif. — He is No. 437 in the world rankings, for those of you keeping score at home.

After Thursday morning’s first half of the Frys.com Open, Harold Varner III was No. 3 — his opening 65 left him in third place with half of the field finished behind Brendan Steele’s 63 and Jhonny Vegas’ 64.

“You obviously want to start well and I did,” Varner said. “It gives me a good chance to play well the next three days.”

Varner was born in Akron, Ohio, got a set of golf clubs at age 2 and got hooked on golf as he grew up in Gastonia, N.C., just outside Charlotte. It sounds a little like the Tiger Woods story, except Varner’s family was considerably more economically challenged, and Varner didn’t have the physical gifts to be the world-beater that Tiger evolved into.

He spent the last two seasons on the Web.com Tour and played his way to the big stage for the 2015-16 season. He has arrived and, even better, he has arrived with big game and big personality.

Varner, 26, is not big. He is 5 feet 8 inches, a solid 170 pounds and is a big hitter. He ranked eighth in driving distance on the Web.com Tour last season. He is a consummate golf junkie, a true range rat in the most complimentary sense of the word.

Varner in one sentence: He’d rather be golfing.

His father was a car salesman who would drop Harold off at the golf course every morning before 8, then pick him up at 7 o’clock at night. Sometimes, his dad practiced with him late in the day but mostly, Harold hung out at the course, shagging his own golf balls — it was that kind of a range, old school and low rent.

“I didn’t feel like walking really far,” Harold said, “so I got really good inside of 150 yards.”

He improved from necessity, the ultimate teacher. He’d chip and putt around the practice green. Or play golf with some other kids who were there. He was all golf all the time. He played college golf at East Carolina and he’s quick to admit that golf was his focus, not academics. “They gave me a diploma,” he said with a laugh, “so I’m all right.”

Varner had perfect attendance on the Web.com Tour last season, playing in all 25 tour events. He is here to play golf and he’s off to a good start. Asked what his schedule was for the rest of the fall, Varner said he thought he’d get into two of the five fall series tournaments, but a media official corrected him and said he’d get into all five. Then I’m playing all five, Varner said.

You aren’t going to take some time off during that stretch, a reporter asked. Who’s the rookie in this picture? “What am I going to take time off for?” Varner asked, slightly puzzled.

He’s spent the main part of his adult life trying to get here. Now he’s here and he’s going to play. He’s got an everyman’s view of golf, which is refreshing in the pro world where a lot of players have won millions and were country-club silver-spooners growing up. That’s not Varner.

He struggled to answer a question about the best course he’s ever played. There are so many famous tracks out there and Varner, now that he’s a PGA Tour rookie, is going to have a chance to play some of them.

Reminded that he played the 2013 U.S. Open at Merion, he nodded. “That was pretty good, too,” Varner said. “It was just so hard. I can’t really say that was like a cool experience — I shot a thousand!”

The writers laughed, Varner laughed. Every golfer can relate to that. You play a great course but shoot a bad score, it’s just hard to enjoy it.

His opening round at Silverado Resort was impressive. He birdied the last two holes on the front nine to turn at three under par. He finished strong on the back, too, eagling the par-5 16th and adding birdies at 17 and 18. He was at a loss to describe his style of play. “I don’t know,” he said. “I hit it really wild and sometimes I get it up and down and sometimes I don’t.”

Thursday, he said he just stayed patient, gave himself a lot of birdie opportunities and waited for the putts to fall, which they did at the end.

“The greens here are way firmer than they were on the Web.com,” Varner said, “but it’s still golf. That’s all I’m doing. I’ve got 54 holes to play. I’m having fun.”

Varner is just the kind of guy you can root for. He’s pleasant, smiles a lot and has that genuine self-deprecating style of talking. He became a golfer, he said, because “I never got tall enough and never got big enough. I couldn’t really play basketball or football.”

Golf, he learned, he could get better on his own. He could practice on his own. His success didn’t depend on teammates, it was up to him. He loves basketball, he loves LeBron James (if you like basketball, who doesn’t) and he admits that if he was at least 6 foot 3, he’d be playing pro basketball somewhere in the world.

Varner is coached by Bruce Suddath, the pro emeritus at Gaston Country Club, a man he looks up to for helping get to this level. Now that Varner lives in the greater Jacksonville, Fla., area, he frequently sees former PGA Tour winner Morris Hatalsky. Together, they won the First Tee Open at Pebble Beach in 2007, and they stay in contact.

Varner is an underdog story. His game and his personality ensure that he’ll get his share of publicity. He has earned it. He will also get attention because he is only the second African American player to be a PGA Tour member since Tiger Woods broke onto the scene at the end of 1996.

He’s been getting those questions ever since he stepped into pro golf. He will continue to get them. No, he hasn’t met Tiger yet but he hopes to do so in 2016. Like Tiger did, he downplays the race issue. He wants to be a great golfer, not a great black golfer.

Asked the inevitable question why more black players haven’t succeeded in Tiger’s wake—Joseph Bramlett of Stanford is the other African-American who made it to the tour, then had back issues—Varner said, “It does surprise me. I don’t think Tiger really motivated me. I didn’t see Tiger as a black or white thing. I just knew he was the best player and he happened to be black.”

The inevitable follow-up media question is whether his success might inspire other young black golfers. “I hope to, I want to inspire all races,” Varner said. “If me playing golf brings more African Americans to the game, then the more, the merrier. But I want to bring all types of players to the game. That’s my goal.

“Everything is possible. If I put my mind to it, I think I can do it.”

The rookie’s career is a work in progress. One round down, one good round, another round coming up Friday. “I just need to keep doing what I’m supposed to be doing and that’s playing golf, seeing my target and trying to hit it,” he said. “I’m excited to be here, but I’m just playing golf.”