CHARLOTTE – After 36 holes on a golf course that’s dear to his heart, Rickie Fowler has returned to a familiar place: right in contention to win his first career major championship.

And playing alongside him, Rory McIlroy rallied late but will need two big rounds this weekend to win his third PGA and fifth major.

Fowler, who won his first PGA Tour title here in 2012, made two birdies on his opening eight holes, then reeled off 10 straight pars for a one-under 70 that left him five shots behind clubhouse leader Kevin Kisner.

While McIlroy hit driver at every opportunity, Fowler often dialed back off the tee with irons and fairway woods. Fowler’s round may have lacked fireworks, but his strategy of hitting fairways and greens has paid off.

“Pars are good. The biggest thing is not giving shots back,” Fowler said. “The biggest thing for me, I’m trying to get the ball in the fairway and take trouble out of play and minimize the mistakes. You play aggressive when the time is right.”

Fowler also seemed to enjoy himself. On his walk from 18 to 1, Fowler crossed the putting green and bumped into his buddy Jordan Spieth, who was warming up for his afternoon tee time. After a quick conversation, Rickie high-fived Spieth’s caddie, Michael Greller, on his way back out to the course. Fowler also spent long parts of the round chatting with McIlroy, and on the 7th tee he sidled over to NBA star-turned-TNT commentator Andre Iguodala.

The 28-year-old is on anyone’s short list of golf’s greatest players today without one of the big ones, and he has seven career top-10 major finishes, including a T3 at the 2014 PGA at Valhalla, which McIlroy won. Fowler would love to erase his name from that list, but he isn’t dwelling on it now.

“With the way I’ve been playing, how I’m swinging this week and last week going into it, I know I can win this week. That’s already set,” he said. “It’s more in between the ears, making sure I make the right decisions and not get ahead of myself.

“This week I’m going to have a good chance. I have got to manage that properly.” 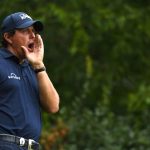 McIlroy is a two-time winner at Quail Hollow and, as one of the games best drivers, he entered as a pre-tournament favorite. But he was unable to take advantage of many of his booming tee shots, and mixed in loose irons with spotty putting while posting one-over 72. He’s 2-over for the tournament, but safely inside the cutline, which was projected to be 4-over with the afternoon tee times on the course.

“I probably didn’t quite hit it as well off the tee as I did yesterday, and wasn’t putting myself in positions where I could go at a lot of pins,” McIlroy said. “But greens are firm. Some of the pin positions are really tricky. Anything under par today is a really good score.”

McIlroy started his day by blasting an approach to the par-5 10th that caught the cart path and bounded away. McIlroy took a free drop away from the concrete and threaded a punch shot that caromed off the path, through a bunker and onto the green to set up an improbable par. “That could have been a six or a seven quite easily. So to actually get away with a five, I actually felt pretty good about myself going to the next tee,” McIlroy said. 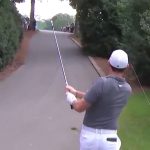 You may also like Watch Rory McIlroy pull off the most remarkable shot, and par, of the PGA Championship

He kicked in a birdie on the par-5 15th and appeared to be on his way. But midway through the round, McIlroy lost the plot. As he strolled up the fairway on 2, a fan hollered, “Let’s go Big Mac! Ball out baby!” But McIlroy drove into the right rough and took a ribeye-sized divot while excavating it. Bogey. On 3 he blew a 4-footer for par, and after two more bogeys on 5 and 6, McIlroy was suddenly four over and in danger of being chopped by the cut.

But on 7 and 8 he busted drives that measured 314 and 321 yards to help set up key birdies that got him into the weekend, and into the tournament.

“Had a little bit of a mini-rally at the end, which I needed,” McIlroy said. “I feel a lot better about myself being two over for the tournament instead of four over. I think it’s quite a big difference. Get out tomorrow, get off to hopefully a better start. I feel like I’ll still be right in this tournament.”

In seven career events at Quail Hollow, McIlroy has six career top 10s, including two titles. He also holds the course record, a 61 he shot en route to winning by seven shots in 2015. With that kind of firepower, he can’t be counted out yet. But don’t count on another 61.