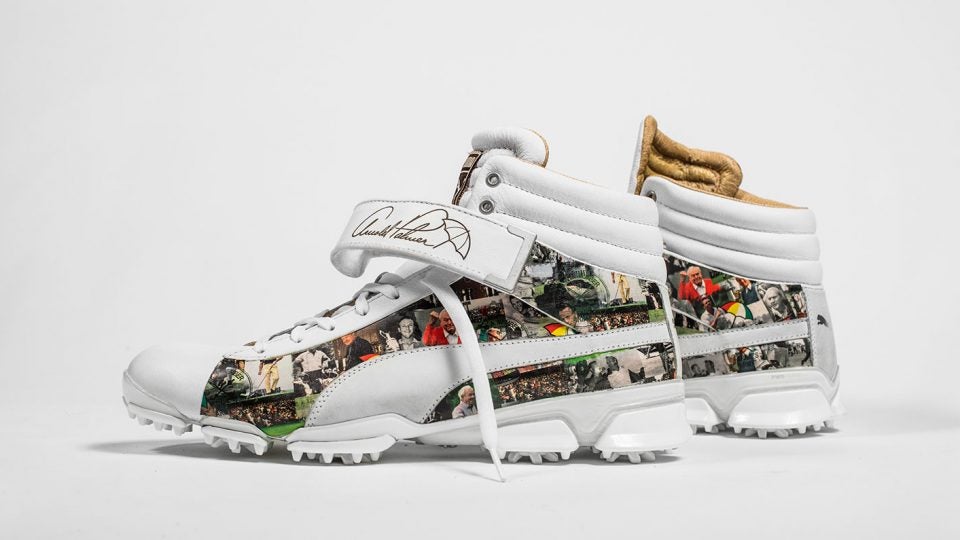 A look at the high-tops that Fowler will wear this week at Bay Hill.
Puma

Rickie Fowler’s high-tops are getting a personal touch this week.

Fowler will wear Arnold Palmer-themed high-top golf shoes at Bay Hill in honor of the legend who passed away last September. Fowler attended Palmer’s funeral and closely associated with Palmer throughout his young career.

“I feel privileged to have known Arnie and be able to call him a friend,” Fowler said in a release. “I wanted to do something to celebrate what he did on the course and more importantly how he used his platform to benefit others through his Foundation. He is the King after all!!”

The shoes were commissioned by Puma Golf and designed and created by Dominic Chambrone. He used a “high-grade infused graphic” that was printed onto the leather, so the images look crisp. Then he hand-cut each piece used on the shoe. Lucky for him, there are only two pairs being made. One will be the pair Fowler wears all week at Bay Hill. The second will be signed by Fowler and auctioned off for charity after the tournament with the proceeds benefiting Arnie’s Army Charitable Foundation.

On the tongue of the right shoe, a quote from Fowler is engraved: “Legends never die. You will live on forever Arnie. I will never forget the bear hug in front of the clubhouse at Augusta, watching you hit your final tee shot there, and to spending time with you in the locker room at Bay Hill. Thank you for being you and giving me the opportunity to do what I get to do everyday! I love you as did everyone! RIP The King.”