Rickie Fowler, Jimmy Walker in Second Through 54 Holes at World Cup of Golf 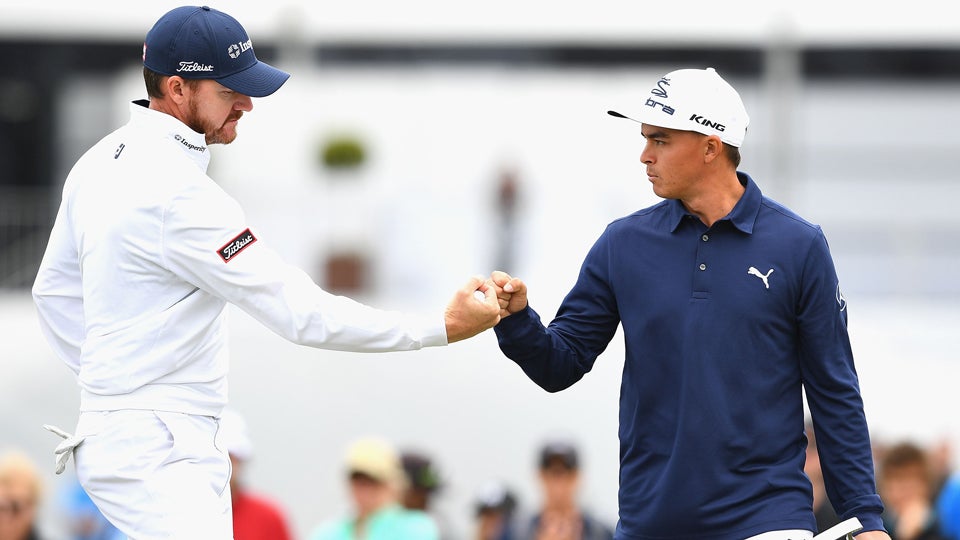 The American pair of Jimmy Walker (left) and Rickie Fowler (right) will be in the final pairing Sunday at the World Cup of Golf.
Getty Images // Quinn Rooney

MELBOURNE, Australia — Denmark has vowed to go on the offensive in the final round of the World Cup, believing that to be the best strategy to protect a four-shot lead earned in Saturday’s third round.

The title is tantalizingly within reach for Soren Kjeldsen and Thorbjorn Olesen after a two-under 70 in the third round foursomes propelled them to 14-under at Kingston Heath.

“Attack for sure. We try to take shots on and more so in the fourball. A lot of birdies are going to be made tomorrow, so we have to make birdies too,” Kjeldsen said.

Only American duo Rickie Fowler and Jimmy Walker made ground on the Danes. The United States was one of only two teams to break 70, shooting a three-under 69 to advance to second place at 10-under and, importantly, into the last pairing for the last round.

RELATED: 7 Things to Know About the World Cup of Golf

On whether the Danes will feel extra pressure playing alongside the Players champion and US PGA champion, Kjeldsen quipped: “They’re not going to play my Srixon or Thorbjorn’s Titleist.”

Olesen cautioned everyone not to get ahead of themselves to predict a Danish victory. “I had a seven-shot lead in Turkey and it got down to one. So, I know how easy it can slip away. A four-shot lead is nice, but it’s not going to be easy,” he said.

The Americans are ready for the fight as Walker agreed the last group was the best vantage point to launch an assault on the lead.

“That’s a good place to be going into the last day,” Walker said. “I’m excited, I know Rickie’s excited and we’re looking forward to a good day.”

Fowler said: “It would be nice to be out front or a little closer, but with where we were coming into today, just putting up a solid round of golf was what we wanted to do. We did that and we gave ourselves a chance going into tomorrow. It’s going to take some good golf and some birdies, obviously, but it will be nice being in that final group to know exactly where we stand.”

China couldn’t apply any heat playing alongside the Danes as Ashun Wu and Haotong Li stood still on the scoreboard after a 72 left them at nine-under, five back in third place.

No team that’s midfield or better was prepared to concede defeat. Very low scores are possible, as evidenced by Denmark’s sizzling 12-under 60 in Friday’s fourball competition.

New Zealand, nine shots off the pace, reflected the optimism when Ryan Fox revealed the game-plan to be employed by he and partner Danny Lee.

“Danny’s the one that hits them straight, so he hits first and then I can just lash at everything pretty much. Hopefully, I can chip in on a few holes like I did on Friday and get some putts to go in. There’s a good score out here, especially if the conditions are like today,” Fox said.

Even host nation Australia is preparing a bullish strategy, despite a seemingly impossible task a whopping 10 shots behind the leaders.

“It’s definitely a lot easier to be aggressive in the fourball when you know you’ve got your partner on the green or in the fairway already. But you don’t want to be too aggressive and finish up short-sided in a bunker and then you’ve only got one putt at it (birdie). That’s what we’ll be concentrating more on tomorrow is trying to get two birdie putts on every hole and, hopefully, one of us will make it and go to the next and do it again,” Marc Leishman said.

“The ball striking has been good and neither of us have putted bad, they just haven’t gone in. We’ve hit a lot of good putts that have looked like going in and burning the edges (of the cup). Hopefully, they’ll drop tomorrow and we can try and beat Denmark’s score (60) yesterday. I think we’ll have to.”

England, which started the day five shots behind, blew its chances with a horrendous back nine, leaking six shots in the last eight holes for a 77 to fall back into the pack at two-under.

Chris Wood and Andy Sullivan, playing alongside the Americans, were in joint third place after a birdie at the 10th before shedding shots at 11, 13, 16 and 17 and then a crushing double-bogey finish.

Wales and Thailand certainly didn’t get anything going. Amazingly, neither team could find a single birdie playing together in the middle of the field.

Welsh pair Bradley Dredge and Stuart Manley ran up two double bogeys and four more dropped shots in an eight-over 80, while Thai duo Thongchai Jaidee and Kiradech Aphibarnrat had a triple bogey at the par-four 16th to sign for 77 to fall back to even par for the tournament.