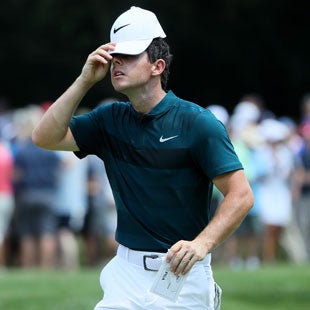 Rory McIlroy and Rickie Fowler on the 2nd green during the Singles Matches of the 2014 Ryder Cup.
Harry How

It looks like Rickie Fowler is not getting complacent about his chances to become a captain’s pick for the U.S. Ryder Cup team.

After carding a 71 at the Olympics this morning (he shot a 75 yesterday and is currently in 50th place), Fowler said that he planned to play the Wyndham Championship next week to pick up more points before the cut-off.

“I would want Davis to pick me because he thinks I deserve a pick,” Fowler said after his round. “I want to go there and play well and earn some points. I don’t want him to think I’m just assuming I’m getting a pick.”

Fowler has struggled to break through this season, especially at the majors. He missed the cut at the Masters and the U.S. Open. As of this week, he is in 12th place in the Ryder Cup standings, behind his Olympic teammates Matt Kuchar and Bubba Watson.

Fowler has until September 25th to impress Captain Davis Love III enough to become one of his four extra selections and until the end of August to accumulate points to get an automatic selection.