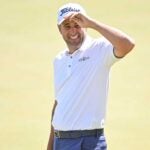 Richard Bland has advanced at the WGC-Match Play

He was supposed to just be a one-day story.

It was a nice story, to be fair. Last summer at Torrey Pines, there was Bland, 48 years young, playing in the U.S. Open, the fourth major championship of his career. He’d earned a berth on the back of a playoff victory at the British Masters, his first win on a major professional tour, a win that had come in his 562nd career start (he turned pro in 1996).

The man from Staffordshire, England had lost and reclaimed status on the European Tour (now the DP World Tour) five times, most recently in 2018, when he’d plummeted to No. 700 in the world by year’s end. He’d wept after that British Masters win. But somehow, at the U.S. Open’s halfway point, he was the co-leader.

“It’s nice to give these gym-goers a run for their money,” he said after his second round.

There are often feel-good stories at major championships; unlikely characters temporarily appear on leaderboards before inevitably fading as the lights get brighter and the herd thins on the weekend. Wrack your brain for memories of 22-year-old amateur Paul Dunne contending at the 2015 Open Championship. Of 17-year-old Beau Hossler leading the 2012 U.S. Open. Of 818th-ranked Jason Gore in the final group at the 2005 U.S. Open. Seventy-two holes is long enough for most feel-good stories to go up in flames.

Bland obliged; he shot 77-78 on the weekend to fade to T50. As expected. He’d had his moment in the sun, but it was time to move on. He’d stretched a one-day underdog story into two. That was plenty.

Need I go on? A steady drumbeat of top-five finishes on the DP World Tour meant this late bloomer kept climbing in the world rankings. He’d cracked the top 80 by the end of 2021 and just kept churning; he finished solo second at the Slync.io Dubai Desert Classic to climb to No. 53.

Those ranking numbers mean increasingly more as they get smaller. Top 64 means you get into the WGC-Match Play. Top 50? That means a late-stage invitation to the Masters. Bland entered this week in Austin at No. 60 in the world, and he’s desperately hoping that by the time he leaves he’ll be top 50 instead.

In his first pool play match, Bland took on 28-year-old protein refrigerator Bryson DeChambeau and played him to a draw. On Day 2 he took down Talor Gooch.

“There’s a lot to play for, certainly for me,” he said post-round.

And on Day 3 he defeated Lee Westwood, a fellow forty-something Brit who he’s known for more than three decades. On he goes, through to the round of 16, world ranking points accumulating. After the round he was asked, at age 49, what he thinks of his story. His answer showed that he knows we’ve been watching and marveling.

“The messages that I get from people all over the globe over the last 12 months have been incredible,” he said. “People that you never will ever meet and they tell me their story, that what I’ve done has inspired them to carry on their journey. They were losing a little bit of hope, and [wondering] ‘Am I going down the right path?’, and it’s given them that extra sort of belief that they are on the right path.

“Reading them is quite emotional. I will always keep them,” he added. “Whenever this phone gets upgraded or whatever, all those messages will stay forever. That’s something that I will cherish very deeply.”

Bland’s likely opponent in the round of 16? Longtime World No. 1 Dustin Johnson. He shrugged off the matchup.

Life is good for Bland. He thinks ahead, looking to Roger Federer and Rafa Nadal and 64-year-old Bernhard Langer for inspiration, mulling over a run on the PGA Tour Champions. His wife is coming in Saturday. The couple had to change plans; they were supposed to go to New York to celebrate her birthday but will reroute to San Antonio, where Bland has been given a sponsor’s exemption into the Valero Texas Open. A potential last chance to win and get in.

It’s only fitting that such a late bloomer is extending his time in golf’s little spotlight. World ranking calculations are never simple, but if Bland wins one more match, he’ll likely make the jump into the top 50, guaranteeing himself a spot in the Masters field. After all these years, the game still surprises him.

“I think with the 12 months that I’ve had, that would be a pretty nice sort of cherry on the top,” he said.

The man named Bland remains anything but.