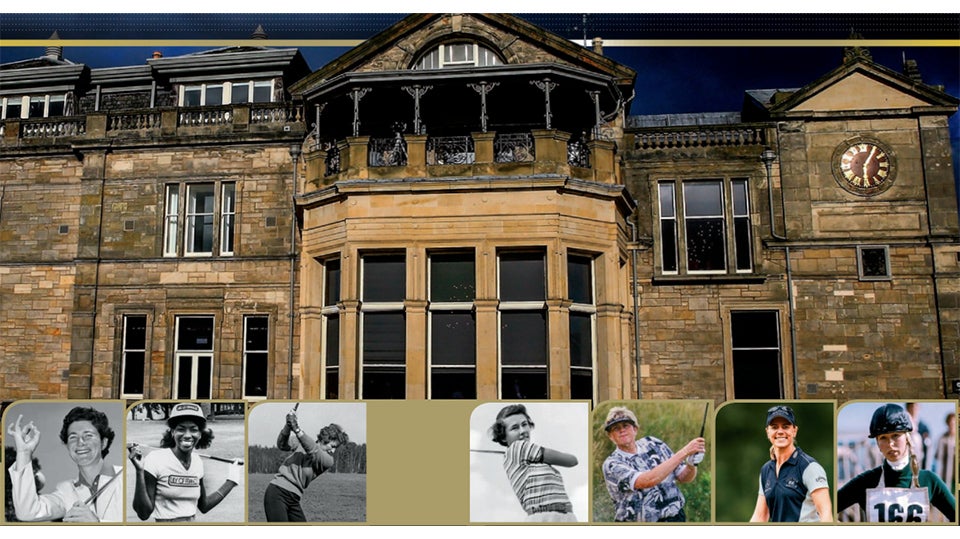 LPGA co-founder Louise Suggs was valedictorian of her high school in Austell, Georgia, but her family couldn’t afford to send two kids to college. Her brother went to Georgia Tech; Louise turned pro.

Bill Powell, a janitor and security guard, designed, built and ran the first integrated golf course in Ohio. His daughter, Renee, turned pro in 1967. As a rookie on the LPGA tour, Renee Powell received death threats for the offense of playing golf while being black—not to mention female.

Annika Sorenstam still remembers the sign warning her away from the men-only clubhouse. She was just a teenager, a junior star trying to fit into the world of golf outside her native Sweden. Too polite to ask why she wasn’t welcome at the Royal & Ancient Golf Club of St. Andrews, she detoured around the clubhouse on her way to the tee. “I wasn’t about to make a fuss,” she says.

Laura Davies was 15 when she irked the men of another UK club. Her crime: blocking the view from the members’ lounge. Davies and a friend got a scolding from the club secretary “because we walked in front of their window.” Looking back, she calls the incident silly. “But at the time, we were young girls, panic-stricken.”

You get the idea. Women have been playing uphill since Mary Queen of Scots began smacking wooden balls almost 500 years ago. The R&A, the most important entity in the sport’s thousand-year history, spent its first 260 years as an auld boys’ club—until February 2015, when it offered memberships to seven exceptional women: Suggs, Powell, Sorenstam, Davies, amateur stars Belle Robertson and Lally Segard, and golf booster Princess Anne, Queen Elizabeth’s sporty daughter.

“A game-changer,” Powell calls the move. “To be accepted, even welcomed into golf’s inner sanctum…wow!”

Sorenstam hails R&A membership as “a super honor.” She and Davies, two of the best female golfers ever, with 92 LPGA victories and 14 majors between them, were obvious choices. Davies, a straight-talking woman who became Dame Commander of the Order of the British Empire (the female version of knighthood) in 2014, sees the honor as “only right.” In her view, the R&A’s men-only policy was starting to look “a bit ridiculous in this day and age.”

Flashing back to her first trip to St. Andrews, Sorenstam says, “I loved it. I was 15 or 16, playing with Scottish caddies for the first time, trying to understand their dialect. One thing I understood clearly was “Trust me.” They’d point at a spot that looked 50 yards sideways. “Trust me!” And they were always right.”

Thirty years later, after club members decided in a landslide vote to admit women, she stepped into the R&A’s clubhouse as a member. If you go through the front door and turn right at the Claret Jug, you’ll find Sorenstam’s locker beside those of Davies, Powell and the other new arrivals. Last summer, sipping lemonade in the members’ lounge, Sorenstam watched Darren Clarke, Padraig Harrington and her countryman Jonas Blixt finish practice rounds before the 2015 Open. But membership has its drawbacks. “Now I get calls and texts from everybody I know: “When are we playing the Old Course?””

Sorenstam hopes to tee it up with some of her fellow barrier breakers. She often teamed with Davies as a leader of Europe’s Solheim Cup teams. Any day now, she might join a group featuring Belle Robertson, a farmer’s daughter who won seven Scottish Ladies’ Amateur titles. Now 79, Robertson still plays off a 2 handicap. She’s 15 years younger than France’s Segard, the 1950 British Ladies’ Amateur champ who’s also known as the Vicomtesse de Saint Sauveur. And while every one of the above could thump Princess Anne on the course, the Queen’s only daughter is no slouch as a sportswoman. At the 1971 European Equestrian Championships, she won the gold medal in eventing, the most grueling test in the sport. Her Royal Highness also competed in the 1976 Summer Olympics and has supported golf as a member of the International Olympic Committee. What’s more, she’s probably the toughest princess of our time. In 1974 she was heading to Buckingham Palace when a would-be kidnapper in a white Ford Escort forced her limousine to stop. The man jumped out, waving a pistol. He shot her bodyguard. He shot a bystander in the chest. Then he leveled his gun at the 23-year-old princess. “Get out,” he told her. To which Anne said, “Not bloody likely!” She slipped out the other side of her limo while police arrived and tackled her attacker.

Few golfers can match that sort of action, but R&A membership has special meaning for the Americans who made the game the focus of their lives.

Suggs—who died in 2015 at age 91—saw it as the capstone of a life in which co-founding the women’s tour was only one distinction. A peppery competitor who had a long rivalry with Babe Didrikson Zaharias, another LPGA co-founder, Suggs won 11 majors with a swing Ben Hogan admired. In 1961 she won a tournament at a par-3 course in Florida, beating a field of men featuring third-place finisher Sam Snead. When Snead grumbled about losing to a girl, Suggs said, “I don’t know what the hell you’re bitching about, Sam. You didn’t even come in second.” He stomped to his car and peeled out of town. “Sam burned a quarter-inch of rubber,” she recalled. Suggs went on to design MacGregor’s first clubs for women, a move that made millions when her woods and irons became the top choice for Japanese men. “Like Arnold Palmer, she loved grinding irons,” says Elaine Scott, her biographer and friend. “When Louise walked into the MacGregor factory, the workmen would shout, “Dame on the floor!” Then they cleaned up their language for her,” not knowing that Suggs could outcuss a sailor. The first woman inducted into the World Golf Hall of Fame, she lived near the Hall in St. Augustine with her dog, Dammit. In retirement she coached novices, pros and celebs—President George H. W. Bush gave First Lady Barbara a lesson with Suggs as a 50th anniversary gift—and tooled around town in a convertible with a license plate that read TEED OFF.

“Even in her 80s she kept up with the game,” Scott says. “The LPGA gave her an iPad for her e-mails. Louise stayed in touch with Davis Love, Beth Daniel, Zach Johnson and Matt Kuchar. Karrie Webb called all the time. And then comes a letter from the R&A!” By then Suggs was blind in one eye. (How was she coping? “Okay for a Cyclops,” she answered.) She hoped her failing health would allow her to fly from Florida to Edinburgh, take a train-bus connection to St. Andrews and meet Sorenstam and other R&A members for a lemonade, but it wasn’t to be. At the last minute, she phoned Scott: “I haven’t got the strength to get on the plane.”

Suggs died last August, six months after receiving her invitation to join the R&A. She left behind an empty locker in the old sandstone clubhouse and one of the game’s better quotes: “Golf is very much like a love affair,” she said. “If you don’t take it seriously, it’s no fun. If you do, it breaks your heart. Don’t break your heart, but flirt with the possibility.”

Ohio’s Renee Powell, the second black LPGA pro after Althea Gibson (Cheyenne Woods is just the sixth), spent a decade getting turned away from official tournament hotels. She played solo rounds on pro-am days because no amateur wanted to team with her. Powell and Canada’s Sandra Post, a friend who won eight LPGA events, recall many nights when they ordered dinner in a restaurant only to be ignored for hours. “And then, all of a sudden, the kitchen’s closed,” Powell says. She used to kiddingly blame Post: “They don’t like you because you’re Canadian.”

“People ask me if it was fun to be a Tour pro,” says Powell, whose best finish was fourth at the 1972 Lady Errol Classic. “I say, “Well, if you don’t mind having the motel lose your reservation, or not getting served in a restaurant, or death threats, then yeah, it was fun.”

In 1980 Powell, 33, left the Tour to help her father run Clearview Golf Club, a public track 10 miles from the Pro Football Hall of Fame in Canton, Ohio. Her parents had built the state’s first integrated golf course with their own hands, shovels and wheelbarrows. If the R&A is golf’s No. 1 club, Clearview might not crack the top 10,000. Still, Powell devoted 35 years to the place, giving lessons and running clinics and acting as Clearview’s ambassador to the world, with help from friends like Pittsburgh Steelers Hall of Famer Franco Harris. Her 35th year as a teaching pro brought an unexpected e-mail from R&A chief Peter Dawson: “The General Committee very much hopes that you will do the honour of accepting this invitation…”

“I read that thing two or three times,” she says, “to make sure it was real.”

Powell knew her way around Scotland. Her father had served there during World War II, and she had received an honorary doctor of laws from the University of St. Andrews—the first ever for a female golfer—after a club-pro stint in England. “But I was still an outsider. It’s not like I could set foot in their clubhouse.” No woman could. Years ago, on her first visit to the Old Course, she had arrived smartly dressed in a skirt and suit jacket, planning to switch into golf togs in the locker room, “like you’d do anywhere.” The club secretary gasped at the thought. “Oh my,” he said. “There are no provisions for women here.” She changed clothes in a nearby hotel.

Last year was different. Powell flew to Scotland as the host club’s guest during Open Week in St. Andrews. She posed for photos with R&A men and American Mannings: NFL great Archie and his sons, Peyton and Eli. She met fellow honoree Belle Robertson for tea in the clubhouse. Both women wore their official ascots, royal blue silk scarves emblazoned with the club’s logo—a new bit of regalia invented to match the neckties of male R&A golfers. Next, Powell joined Dawson and club captain George Macgregor for what the captain called “an historic day.” Each new member had been invited to bring a guest to a formal luncheon in the clubhouse. Powell chose her pal Franco Harris, who flew in from Pittsburgh to celebrate “one of those moments I’ll always treasure,” he says, right up there with his Immaculate Reception.

Does such a luncheon—such a day—make up for a lifetime of slights from the men who run the game she loves? Powell’s not so sure. “But it was still one heck of a day,” she says.

Her invitation now hangs on the wall in the modest pro shop at Clearview. Today, Muirfield remains the last men-only bastion among Open host sites, and the club’s recent vote to stay that way came with a cost: The R&A booted Muirfield from the Open rota. Meanwhile, Powell’s sights are set closer to home. The year 2016 marks Clearview’s 70th anniversary. Powell, now 70, was conceived around the time her parents cleared the very last beeches and elms off the fairways and opened the course in 1946.

“It’s a long way to go in one life,” she says of seven decades of vandalism and hate mail, being called “honey,” “sweetie,” “witch” and “bitch,” and then, finally, being embraced by the Royal & Ancient Golf Club of St. Andrews. “To be a black girl playing golf in the “50s and “60s, to go from there to joining the most exclusive golf club in the world—what do you call that? A miracle.”